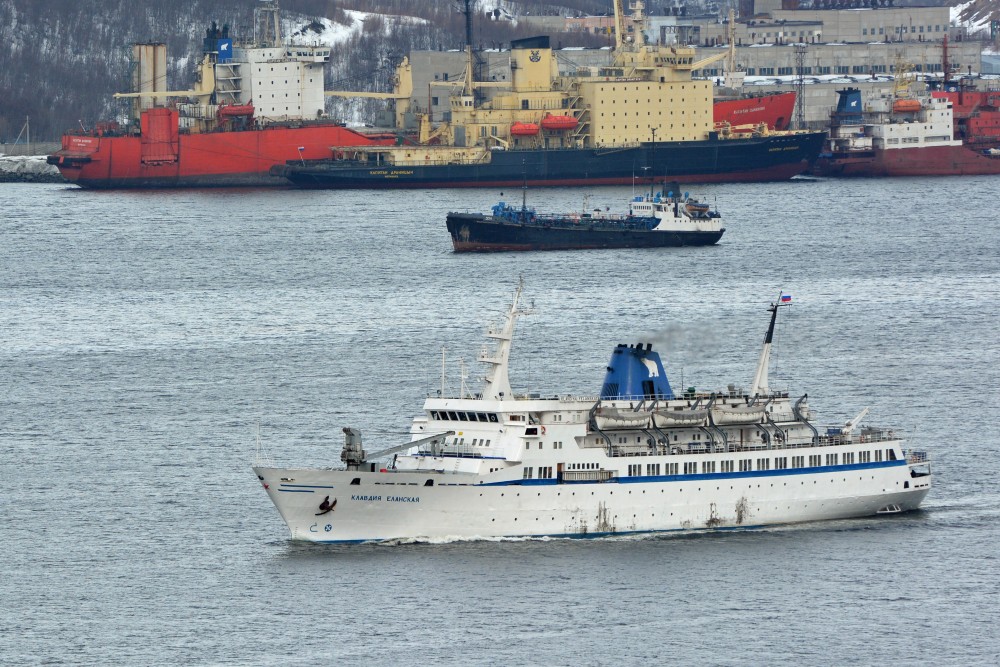 The "Klavdiya Elanskaya" in the Kola Bay. Photo: Thomas Nilsen

The company is no longer capable of operating the 42 year old liner that serves isolated settlements along the Kola Peninsula.
Read in Russian | Читать по-русски
By

The « Klavdiya Elanskaya» was built in Yugoslavia in 1977 and has since sailed along the coast of the Kola Peninsula bringing passengers to and from the remote towns and villages in the area.

For many, it has been the only connection to the rest of the country.

But sailings have been increasingly irregular and cancellations become the rule rather than the exception. Ship owner Murmansk Shipping Company has for years been on the verge of bankruptcy and the « Klavdiya Elanskaya», like the rest of the company fleet, has been subject to decay and mismanagement.

On 10th of July, the regional government said enough is enough and transferred the subsidized sailings on the route to a new operator. From now on, it will be the Northern Shipping Company, a company based in Arkhangelsk, that sails the « Klavdiya Elanskaya».

The decision to deprive the Murmansk Shipping Company of the route is connected with the company’s difficult economic situation and its inability to cope with obligations laid down its agreement with the regional government, Deputy Governor Olga Kuznetsova makes clear.

«A two-month agreement on sailing on this socially important route has now been been signed with the Northern Shipping Company,» Kuznetsova says in a comment. «And if there would be some kind of extraordinary situations we have an alternative solution that from before has been tested, namely the transportation of passengers by helicopters and goods by cargo vessels.»

In parts of June, the passenger liner was reportedly undergoing repair works and passengers were in the period transported to and from Murmansk by helicopter, regional Governor Andrey Chibis confirms on social media.

The « Klavdiya Elanskaya» has for years sailed  weekly from Murmansk to the town of Ostrovnoy and further to the settlements of Chavanga, Tetrino, Chapoma and Pyalitsa on the White Sea coast of the Kola Peninsula. For the about 2,000 people living in Ostrovnoy, the ship is a key lifeline to the rest of the country.

According to the Murmansk government, the frequency of sailings will remain unchanged after the shift of operator company.

The « Klavdiya Elanskaya» is one eight vessels of the kind built in Yugoslavia for the Soviet Union in the 1970s. Three of the ships ended up in the Kola Peninsula. They all carried names of Soviet theater actresses. Klavdiya Elanskaya was the theater and movie star that won a wide range of Soviet cultural awards for her achievements, including the prestigious Stalin Prize in 1952.

Like its sister ships, the « Klavdiya Elanskaya» has ice-class standards and can operate in high Arctic waters, including along the coasts of archipelago Franz Josef Land.

It is a run-down ship, and Governor Andrey Chibis this week admitted that the technical standards «have seen better days».

Ship owner Murmansk Shipping Company was once a leading company in the Russian Arctic, and the fleet criss-crossed icy Russian waters with both people and goods. Today, the situation for the once proud company is a cruel contrast. The shipping company has no cash for the needed face-lift of the «Klavdiya Elanskaya», nor other parts of the fleet. Over many years, major debts have been accumulated, and several creditors have repeatedly initiated court cases against it following the mounting debts.

Several company vessels have lately spent many months in foreign ports arrested for not having paid bills. Among them is the «Novaya Zemlya» that for a long time was locked up in Skagen, Denmark, and the «Kuzma Minin» that had similar problems in Terneuzen, the Netherland, and the «Pomorie» in New Orleans, US