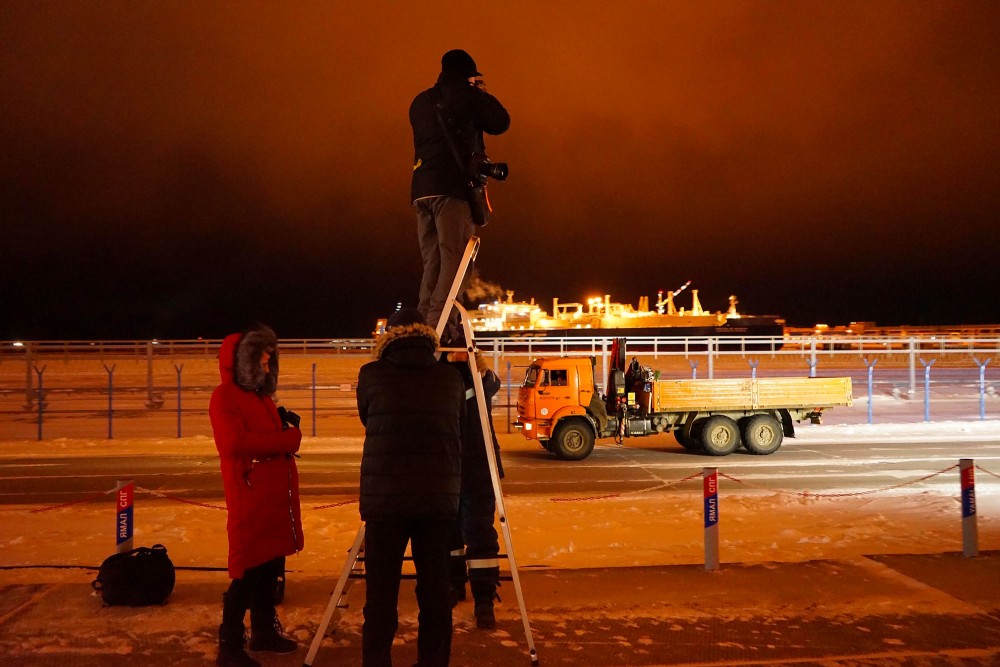 The «Yuri Kuchiev» is built in Finland, owned by Greek shipper Dynagas and now breaking its way through Arctic ice on its maiden trip to the Russian North.
Read in Russian | Читать по-русски
By

Ice conditions in the Russian Arctic waters were increasingly difficult as the 229 meter long vessel this week sailed through the Kara Sea towards the terminal in the Yamal Peninsula.

It is the maiden trip in the Arctic for the oil and condensate tanker that is capable of breaking 1,8 meter thick ice.  According to ice data from the Russian Arctic and Antarctic Research Institute, the northern parts of the Kara Sea, as well as parts of the Ob Bay, now have up to 2 meter thick ice.

It is the first of a big number of visits to Sabetta for the «Yuri Kuchiev», vessel that is designed and is built for shipments to the Russian Arctic.

According to data from the Northern Sea Route Administration, the tanker is due to arrive in Sabetta on Friday. The ship on the 16th December sailed into the Russian part of the Barents Sea, vessel tracking information from MarineTraffic shows.

The «Yuri Kuchiev» is built at the Arctech Helsinki Shipyard, the shipyard that until recently was owned by Russian state-owned United Shipbuilding Corporation.

Reportedly, it is the last vessel built at the yard before the ownership change that took place this year.

The «Yuri Kuchiev» is named after the captain of nuclear-powered icebreaker «Arktika». Kuchiev in August 1977 sailed the «Arktika» to the North Pole, as the first surface vessel ever to reach the top of the world.

The oil tanker was officially taken into service after a ceremony on the 28th August. The ceremony was lead by Olga Salnikova, a representative from Russian natural gas company Novatek.

The ship will be the second icebreaking oil tanker that serves Novatek’s Yamal LNG project. In December 2016, the Chinese Guangzhou Shipyard officially completed the «Boris Sokolov», a 214 meter long and 43,300 tons deadweight ship.

It was Yuliya Zobova, the Novatek representative and the ship’s godmother, that officially launched the «Boris Sokolov». Both «Yuri Kuchiev» and «Boris Sokolov» are owned and  operated by Greek company Dynagas.