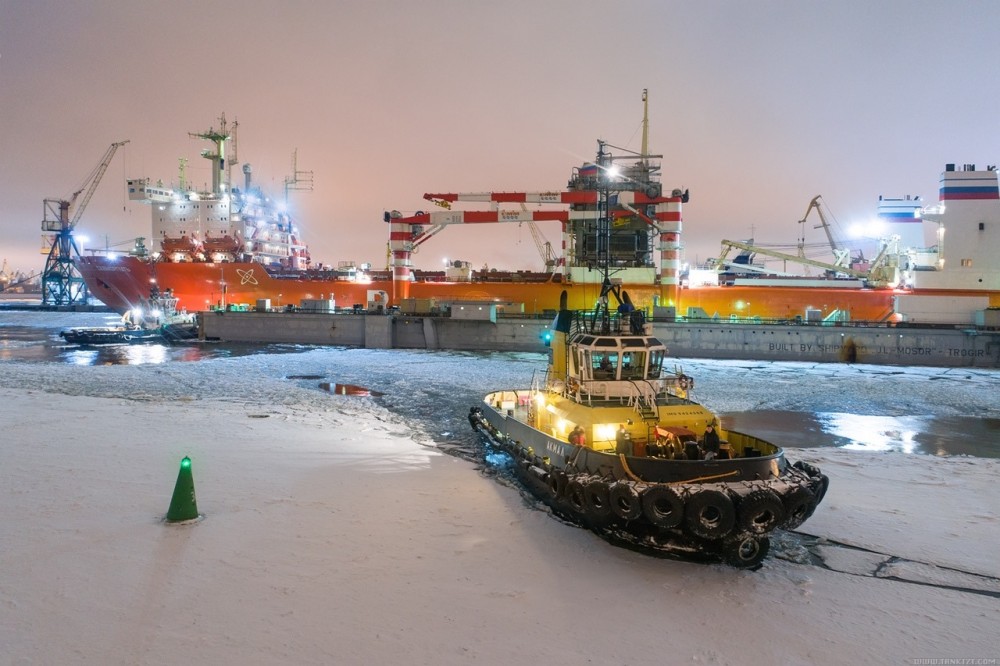 «Sevmorput» is now out of the dry-dock in St. Petersburg and will by late February sail north around Scandinavia towards Murmansk. Photo: Viktor Sukhorukov via Rosatom

The world’s only civilian nuclear-powered cargo ship will later this year bring construction material to the coast of Antarctic aimed for Russia’s research station Vostok in inland Princess Elizabeth Land.
Read in Russian | Читать по-русски
By

The «Sevmorput» has just been removed from the dry-dock at Kanonerskiy yard in St. Petersburg where the propellers are shifted and other hull maintenance work took place.

It was late last year the Barents Observer reported about that the 260 meters long ship had to sail all south from her homeport Murmansk to St. Petersburg for the work since the Kola Peninsula no longer has a dock big enough to take the ship.

The floating dock SD-50 at the Roslyakova shipyard north of Murmansk previously used for «Sevmorput» sank in October 2018.

The nuclear-powered container ship is by the end of February expected to sail out to the Baltic Sea, through Kattegat and the North Sea on her return voyage along the coast of Norway to the Barents Sea port of Murmansk.

Rosatom, Russia’s state nuclear corporation, informs in a Facebook update that the «Sevmorput» later this year will sail across the globe with construction materials aimed for the country’s Vostok research station in inland Antarctica.

Founded by the Soviet Union in 1957, the Vostok station is the place on earth with the lowest ever reliably measured temperature with −89.2 °C. The station is 1,253 km from the South Pole. The «Sevmorput» will deliver the cargo on the coast from where it will be transported into the frozen continent.

Article V of the Antarctica Treaty puts a ban on disposal of nuclear waste on the continent. The only previously use of nuclear energy in Antarctica was the U.S. nuclear power reactor at the McMurdo station that was in operation in the period 1964 to 1972.