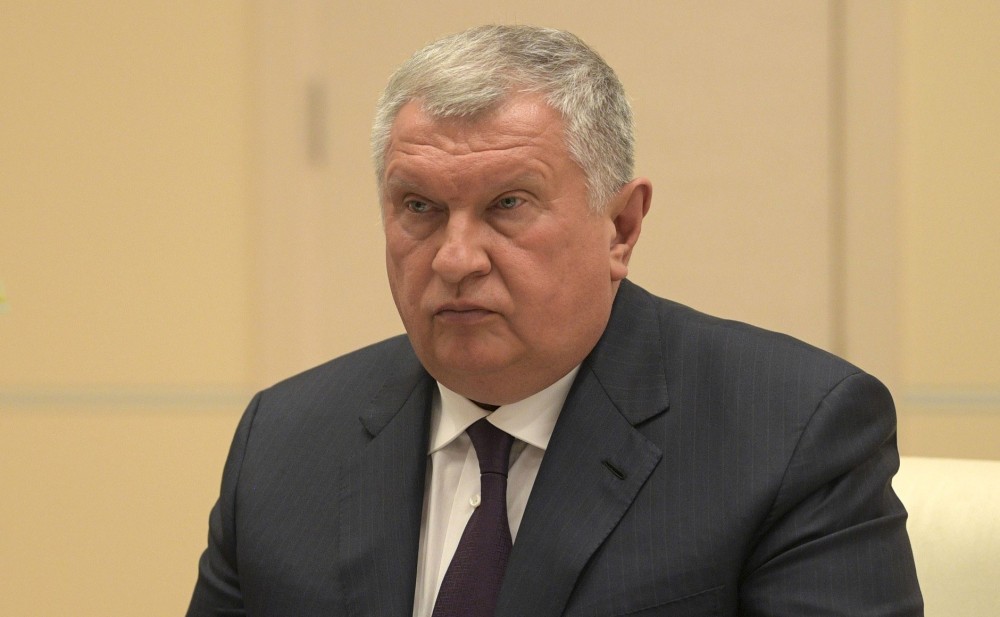 A deep crisis is shattering the Russian petroleum industry, but Igor Sechin still gets the President's unequivocal support for the development Vostok Oil, the project that is due to bring several hundred million tons of north Siberian oil to international markets via the Northern Sea Route.
Read in Russian | Читать по-русски
By

Vladimir Putin has isolated himself in his near-Moscow residence for almost two months. On Tuesday this week, he made a rare appearance in a real one-to-one meeting with near associate Igor Sechin, leader of state oil company Rosneft.

The two men have been close friends since the 1990s. It was Putin that appointed Sechin, his former deputy prime minister, to the post as oil company leader in 2012. Since then, Rosneft has consolidated its position as the country’s most powerful company and embarked on a series of highly ambitious projects in the Arctic.

In Tuesday’s meeting, Putin appeared highly attentive towards Sechin’s proposed ways to overcome the oil crisis and ready to offer his best of assistance.

“What can we do to support you and preserve your investments?” the president asked. “What do you consider to be the most relevant kind of support from the state?” he went on.

Igor Sechin had his list of requests ready. The powerful oil company leader wants Putin to arrange for the provision of available bank credits, postponement of taxation on mineral exploration and a lowering of tariffs on use of state pipelines and infrastructure.

Sechin underlined that Rosneft in 2019 accounted for as much as 18 percent of total federal tax revenues. He also said that the company in 2020 will cut its investment budget with 200 billion rubles from 950 billions to 750 billions.

“A 200 billion cut in capital spending - that is pretty much,” Putin responded.

But it was the company’s grand Arctic project, the Vostok Oil, that appeared to get most attention in the meeting. Sechin put on a project presentation film on his tablet for the president to see.

It is not the first time that Sechin promotes the Vostok Oil to Vladimir Putin. When the two men met in the Kremlin in February, Sechin underlined that the grand Arctic project will include an unprecedented building boom in the far northern Taymyr Peninsula.

Two airports will be built along with a seaport, about 800 km of new pipelines, 3500 km of new electricity lines and 2000 MW of electric power capacity. It will require up to 100,000 new jobs and lead to a 2 percent annual hike in national GDP, Sechin explained.

More information about the project came to the surface in connection with this week’s meeting.

According to Sechin, the Vostok Oil has a resource potential of up to 5 billion tons of light-quality oil. Already in 2024, up to 25 million tons are to be extracted. Three years later, in 2027, production will amount to 50 million tons and in 2030 - as much as 115 million, Rosneft informs.

And it is all made to fit the Arctic ambitions of President Putin who has made it a top priority to bring annual shipments on the Northern Sea Route to 80 million tons by year 2024.

The vast volumes of the Vostok Oil are all to be pipelined from the field areas in northern Siberia to the coast of the Taymyr Peninsula, from where it will be shipped across icy Arctic waters to international markets.

Ultimately, more than 100 million tons of oil from the project will annually be shipped on the Northern Sea Route, Sechin says.

Rosneft is already actively involved in the process of developing the project. Exploration drilling has started at the Zapadno-Irkinsky field, an area located about 140 km north of the town of Dudinka.

About 10,000 tons of equipment and machinery has already been shipped to the drill site located on banks of river Yenisey.

The Vostok Oil also includes four fields in the Vankor area, as well as the Payakha fields owned by partner company Neftegazholding.

The Vostok Oil includes the building of a 800 km of pipeline across the vast tundra lands of Taymyr. It will end up on the northeastern edge of the remote Arctic peninsula where Rosneft intends to build the Chaika terminal.

Apparently, the company is in the process of preparing for building on site. On the 12th May, Rosneft informed that it had struck a deal with partner companies on electric power generation and infrastructure that will provide needed electricity for the process.