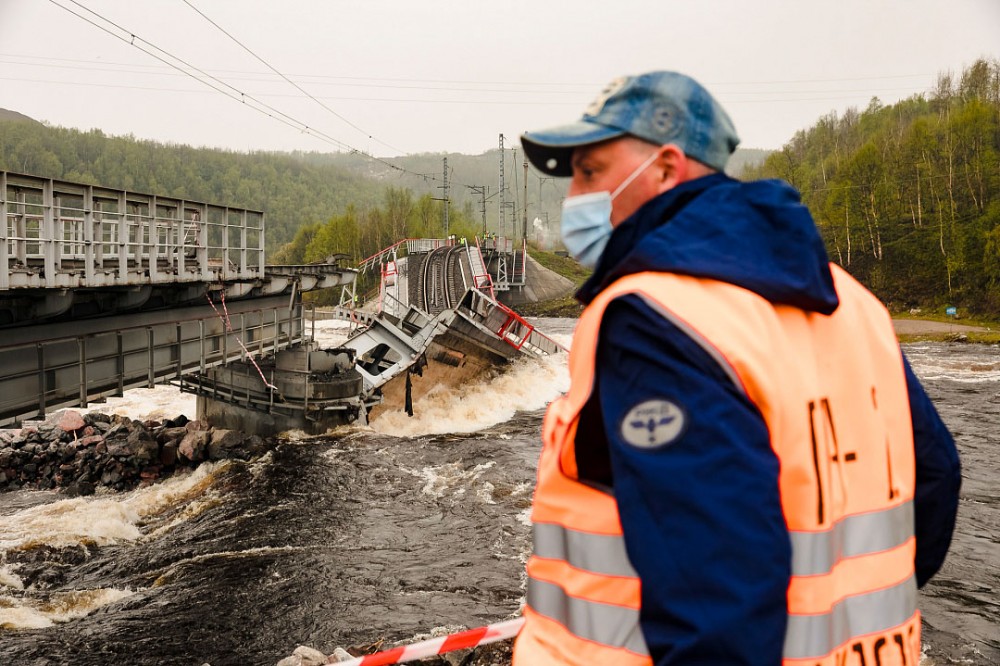 The regional governor says the bridge connection that carries a major share of all goods supplies to the Russian Arctic city can not be rebuilt before October.
Read in Russian | Читать по-русски
By

The bridge across the Kola River was built in 1930 and upgraded in 2014. This week, the aging piece of infrastructure did not withstand the quickly rising river waters and collapsed.

Engineers had discovered ruptures in one of the bridge pillars already late last week and rail transportation had been halted. But restoration works did not succeed and major parts of the bridge on Monday afternoon fell into the river.

The result is a major blow to transport connections to the far northern Russian city.

“Yes, the wagons are standing. Murmansk is closed,” a source in a local company told news agency Interfax.

The Russian Railways that operates the route has now reportedly halted all transportation to Murmansk.

The situation has created a major headache for both industry and population in the region. A major share of all goods that are transported to the Arctic city comes by rail and thousands of people use train as preferred means of transportation.

The Murmansk Trade Port has already had to reject more than ten vessels and is now grappling over alternative transportation routes. The port normally handles big volumes of goods from the region’s major industrial companies.

“The collapse of the bridge near the railway station of Vykhodnoy has triggered a serious disruption of the major logistical chain, an important element of which is the Murmansk Sea Trade Port,” says Port Director Aleksey Rykovanov.

“The transportation of goods by railway is of key importance to us,” he underlines in a comment.

Both people and goods now have to find new ways. According to the regional government of Murmansk, parts of goods transportation will be taken over by trucks.

“The logistical chains are being rebuilt and there will be no deficit of fuel nor foodstuff,” Chibis informs on his Facebook page.

The Russian Railway that owns and operates that line is now starting to build a 5,7 km long circumvention of the bridge. That bypass will ultimately be part of the new railway line to Lavna.

According to Chibis, the bypass will be ready for use by 23 June.

But the rebuilding of the collapsed bridge will take longer. It will not be finished before October, the governor said after Wednesday’s meeting with General Director of Russian Railways Oleg Belozerov and federal Deputy Minister of Transport Vladimir Tokarev.