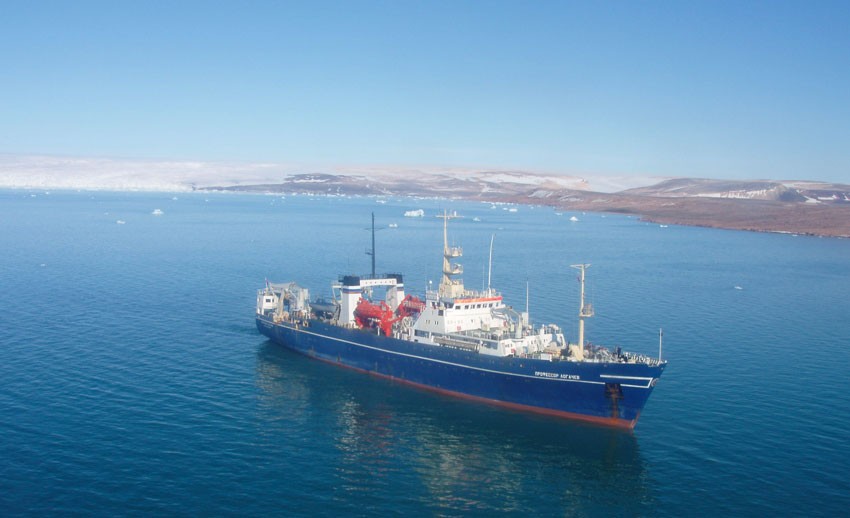 Russian research vessel "Professor Logachev" in early August set out from Kirkenes, Norway, to study the Arctic seabed. It will arrive in Vladivostok in mid-October. Photo: pmge.ru

The Norwegian border town could become hub for an almost 14,000 km long telecom cable between Asia and Europe. Researchers this summer explore the best suited route across the Arctic seabed.
Read in Russian | Читать по-русски
By

The “Professor Logachev” on the 6th August set out from Kirkenes with course for Russian Arctic waters. Over the next three months, the ship and its crew will sail 6,500 km along the north Russian coast.

Their mission is to look into the deep to examine the sea bottom. Their findings will be crucial for the future of Arctic Connect, the project developed by Finnish company Cinia together with Russia’s MegaFon.

The cable connection between Kirkenes and Japan will bridge northern Europe with Russia, Japan and North America, and also meet growing needs in the Arctic region itself, project developers argue.

It will have a transmission capacity of 200 Tb/s, MegaFon informs.

The “Professor Logachev” is owned and operated by the Polar Marine Geosurvey Expedition, a subsidiary of state company Rosgeo. On board are some of Russia’s best equipment and expertise on underwater surveys. The vessel is hired by MegaFon, following an agreement signed in July this year.

According to ship tracking service MarineTraffic, the “Professor Logachev“ is due to arrive in Vladivostok on the 16th November this year. Survey operations are to continue in 2021, and in year 2023 the cable connection might be up and running, CEO of MegaFon Gevork Vermishyam says.

“The maritime surveys constitute the first phase in the project, and are necessary for the determination of a best possible cable route along the Russian Arctic zone, as well as the sites for branch lines to coastal territories,” Vermishyam explains in a comment to newspaper St.Petersburg Vedomosti.

The project is believed to cost up to €1.2 billion. That  sum will not be a problem, Gevork Vermishyam argues and says investors from Norway, Germany and Japan are ready to contribute.

“The main thing now is get convinced about the possibility to lay the cable in the complicated Arctic conditions, something that has never before been done,” he underlines.

In the course of 2021, a tender on construction works is to be announced.

The Arctic Connect has been lobbied by Finnish authorities and was highlighted in a government report authored by former Prime Minister Paavo Lipponen in 2016.

A telecommunications cable between Europe and Asia via the North-East Passage would be politically and technologically feasible, the report reads.

The project is met with enthusiasm in Kirkenes, the Norwegian town located only few kilometers from the border to Russia. It could help revive economy in the increasingly depressed mining town, business representatives hope.

“This is a very smart idea,” says Bernt Nilsen, Director of company Datakortet.

“Kirkenes will then be a connecting hub for global data-communication, which gives us possibility to become a leading node for data centers in Europe, like we have seen in Luleå, northern Sweden,” Nilsen told the Barents Observer following the publication of the report in 2016.

“With cold climate, renewable hydropower and possibilities for locations in old mining mountain halls, all infrastructure is here. The only thing we lack is a high-capacity fiber cable,” Nilsen underlined.