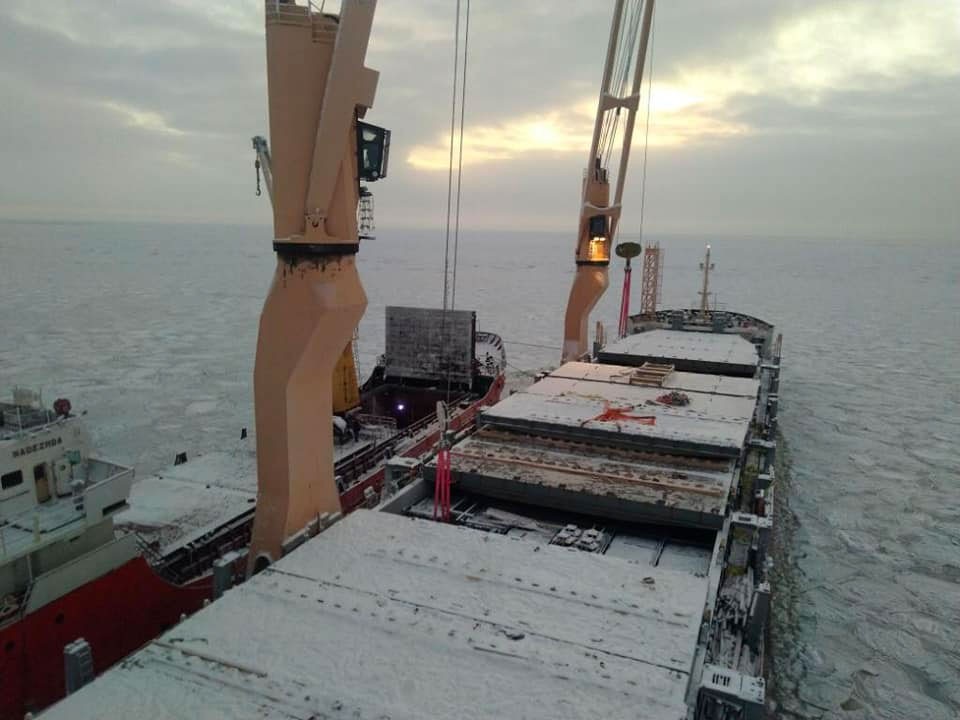 The Sparta III on its way towards Dudinka on 3rd December. Two weeks later, the ship got stuck in the Yenisey Bay. Photo: Rosoboronlogistika

The Sparta-III might not have obtained needed permissions before sailing into the icy Yenisey River.
Read in Russian | Читать по-русски
By

On its way from Dudinka to Arkhangelsk, the 9,490 ton deadweight ship on the 13th December froze into the waters of the Yensiey Bay.

The ship is owned and operated by Oboronlogistika, the military shipping company transporting goods and equipment to Russian military bases and towns.

A person with knowledge about the situation on the 17th December told TASS that there is almost no more reserves of fuel and water onboard and the crew is reportedly fighting hard with icing. Repeated attempts to break loose have failed and Rosoboronlogistika has requested assistance from “a big icebreaker.”

Various equipment onboard has frozen, the source told the state news agency.

Ship traffic information shows that icebreaking supply ship Kigoriak now is in the area to assist. The Kigoriak is believed to be able to operate in up to one meter thick ice.

There is fast ice in the area, maps from the Russian Arctic and Antarctic Research Institute show. That condition requires solid icebreaking capacity for navigation.

However, the Sparta-III only has ice-class 1A, which normally includes icebreaking escort in winter ice.

Information from the Northern Sea Route Administration, a unit under the Russian Ministry of Transport, indicates that the Sparta-III did not have the needed permissions for sailing in the area.

The document issued by the Sea Route Administration to Oboronlogistika on the 13th October allows the Sparta-III to sail only on the westernmost part of the sea route, and no further east than Sabetta. Furthermore, the freight ship was allowed to sail without icebreaker assistance only in waters either free of ice or with light ice.

The Oboronlogistika has not commented on the situation.