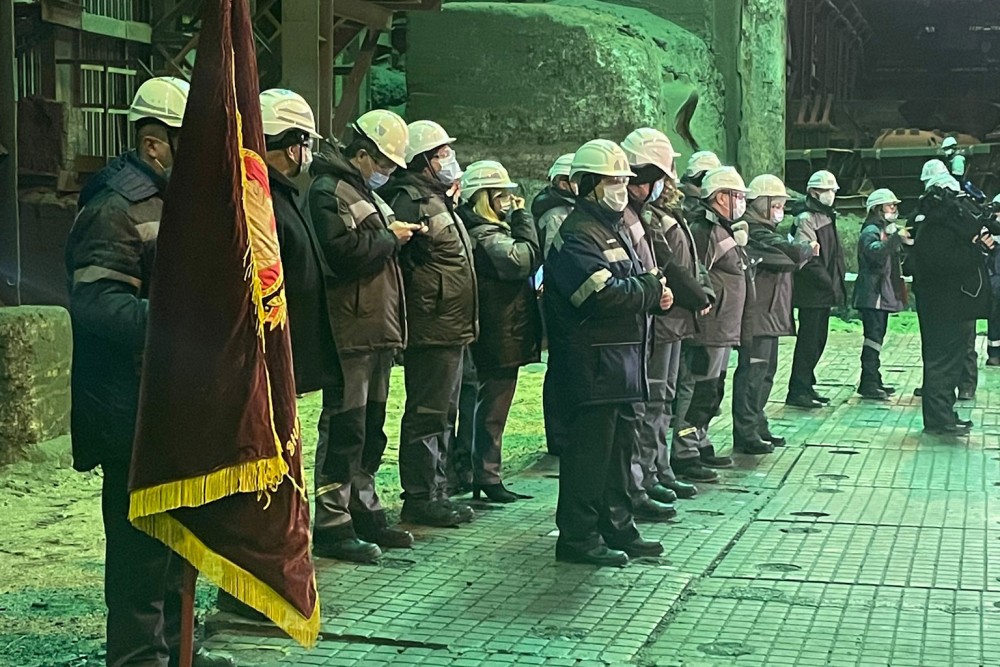 The closing ceremony in the workshop of the smelter in Nikel on December 23. Photo: Andrey Zolotkov

The polluting smelter in Nikel was shut down forever on December 23.
Read in Russian | Читать по-русски
By

“Today will be a symbolic event — the melting of the ‘last ladle’, after which the smelting shop will be closed. This is a historic event,” said Vladimir Potanin, President of Nornickel as the last of the three metallurgical furnaces at the smelter near Russia’s border to Norway was emptied on Wednesday.

Potanin has become a billionaire thanks to the company’s smelting of nickel, cobber and platinum on the Kola Peninsula and in Norilsk in Siberia. Today, he is considered to be Russia’s wealthiest person.

From being worst on dirt, Nornickel now takes dramatic steps towards the green economy.

Nornickel is a world-leading producer of metals needed for the development of clean energy technologies and renewable energy sources. Nickel, as an example, is in big demand from producers of batteries to electric vehicles. The sale of battery-powered cars peaked at an all-time high in 2020. Global car-makers say this is just the beginning of a new transport revolution.

“This allows us to say that on the map of our country, on the map of the world, there is an environmentally advanced company which also produces goods for the green economy,” Vladimir Potanin said in a statement.

He highlighted that the closure of the polluting factory in the town named after the metal it melts is just a start on the road towards an environmentally friendly production by the company.

“Following the closure of the smelting facilities in Nikel, we are modernizing our metallurgical production in Monchegorsk, including the construction of new state-of-the-art facilities. It is important for us to ensure that our own production meets modern requirements,” Potanin said.

Rebuilt after the Second World War, little or no thoughts were focused on pollution or the health of the workers. With glasnost came openness and people started to travel through the former iron curtain between east and west. For Norwegians, the ecological disaster area surrounding Nikel was an eye-opener. Cross-border sulfur smog from Nikel has since the late 1980s troubled Norwegian-Russian environmental relations.

Norway granted NOK 300 million (€27 million) in the early 1990s to help reduce the emissions, but the money was never spent and was later given back. In 2003, a list of environmental hot spots in the Russian part of the Barents Region was defined by NEFCO and the Arctic Monitoring and Assessment Programme (AMAP). Nikel was listed as one of the most severe spots and was offered financial loans and support from Nordic financial mechanisms to solve the ecological problems.

Other factories take over

With the closure in Nikel, the production chain will be adjusted, the company informs. Concentrate from the Zapolyarny concentrator will be delivered to concentrate shipment hubs, from where it will be supplied to consumers.

Nornickel says the workers in Nikel have been provided social guarantees, like convenient transfer to other company’s operations, retraining and pension programs.

Of the 660 employees at the smelting shop, 72% chose to continue working in the company’s divisions. Most of them are already employed, and the procedure for employment of the rest will be completed shortly.

Nornickel will spend over 900 million roubles for a set of measures and social programs for the smelting shop employees in 2020-2022.

Murmansk Governor Andrey Chibis is an optimist. “The workers who wished to remain with the company were offered jobs in other units. For those who decided to try their hand at entrepreneurship, good starting conditions were created,” he said.

Peak production was in the early 1990s when 1,33 million tonnes of ore material and churning out 100,000 tonnes of high-grade matte were produced per year.

Before the breakup of the Soviet Union the company was state-owned. Today, it is a listed joint-stock company with Vladimir Potanin as one of the main shareholders.