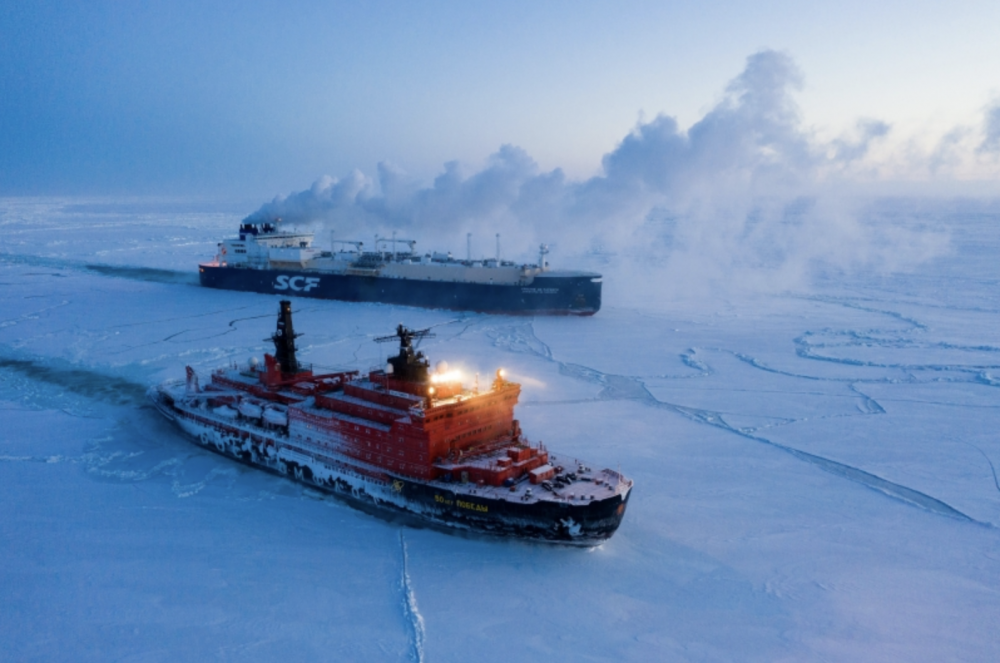 In a twitter thread, Russia's State Nuclear Energy Corporation makes big fun of the trouble for global shipping caused by the wedged cargo ship in the Suez canal and uses the opportunity highlight benefits of sailing the Northern Sea Route route between Asia and Europe.
Read in Russian | Читать по-русски
By

10 percent of global trade is shipped through Egypt’s 193 kilometers long Suez canal, connecting the Red Sea with the Mediterranean. Since Tuesday, the 400 meters “Ever Given” container ship has blocked the canal, spiking fear on oil prices and European industry’s dependence of on-time delivery of spear parts produced in Asia.

3. You might get stuck in the Suez Canal for days pic.twitter.com/Z6slwdyq53

In 2018 the Russian government appointed Rosatom to be in charge of the Northern Sea Route through a dedicated directorate headed by Vyacheslav Ruksha, the strongman from Murmansk previously director of Rosatom’s fleet of nuclear powered icebreakers.

With a rapidly melting Arctic, the window for sailing vessels north of Russia is increasing in time from year to year. Also, Rosatom is substantially boosting its capacity to keep the Northern Sea Route open for shipping by building new and more powerful icebreakers. Thirdly, the fleet of ice-strengthened LNG-tankers serving the liquid natural gas production facilities on Yamal and in the Ob Bay is expending with several tens of new vessels.

For Moscow, Arctic shipping is key for industrial development in northernmost Siberia, believed to  play an important role in the country’s future economy.

Sailing the Northern Sea Route is about 40% shorther from China to European ports compared with sailing the Suez Canal. So far, though, traffic up north has been very little and by no means any competitor to neither Suez or sailings around Africa.

The Northern Sea Route provides much more space if you want to use your giant ships to “draw peculiar pictures” Rosatom jokes in another tweet and links an article showing the AIS track of “Ever Given” forming a giant penis in the Red Sea before entering the canal.

Thread: reasons to consider Northern Sea Route as a viable alternative to the Suez Canal Route

Ice in the Arctic Ocean is relatively thin this winter, so oil tankers and LNG carriers often travel without being escorted by an icebreaker, Rosatom can tell and brags about how they provide real-time data on weather, currents, ice motion and other information important for navigating north.

If in need, like mid-winter, the Northern Sea Route offers icebreaker escort. Rosatom gives an example on how the cargo ship “Sparta III” was rescued free by the nuclear-powered icebreaker “Vaygach” after it got stuck in ice in late December.

Rosatom just recently commissioned its latest icebreaker, the powerful “Arktika” Four similar icebreakers are under construction and a funding to an even larger icebreaker of the Lider class is already provided by the Russian state.