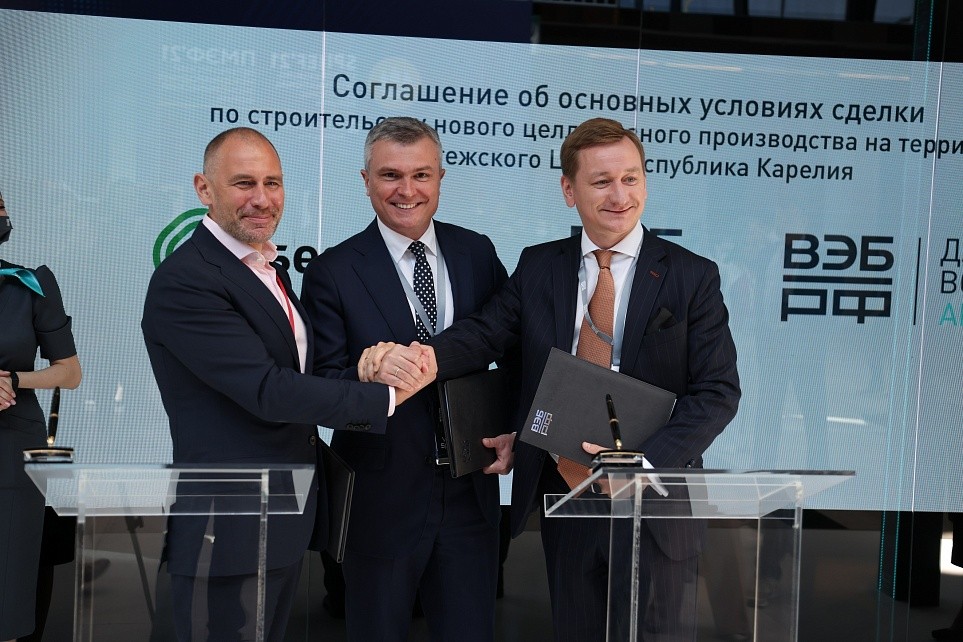 Mikhail Shamolin, Chairman of the Board of Directors of JSC Segezha West (Segezha Group, part of AFK Sistema), as well as Artem Dovlatov, Deputy Chairman of VEB.RF - member of the Board, and Anton Perin, senior vice president of VEB.RF, signed an agreement on the joint implementation of a project to build a new pulp and paper mill in the Republic of Karelia. Photo: Segezha

The construction of a new pulp and paper mill in the Republic of Karelia has just been approved by the State Commission for the Development of the Arctic.
Read in Russian | Читать по-русски
By

The Russian State Commission for the Development of the Arctic has just approved an investment project for the construction of the new pulp and paper mill (PPM). The new PPM will be one of the largest ones in the country and will be producing over 850,000 tons of pulp per year. It is hoped that the new complex will be completed in the next few years.

The construction of the factory is estimated to be worth 178 billion rubles and will be carried out by Segezha group, which is a part of the largest Russian conglomerate company, AFK Sistema. It is estimated, that out of the total sum for the new project, 100 billion rubles (USD 1.33 billion) will be investments. Investments of such a size are a five-year record figure for the Russian timber sector.

Yuri Trutnev, Russia’s Deputy Prime Minister, said to newspaper Delovoy Petersburg: “The project is considered a priority for VEB.RF (one of the largest Russian state development companies). Pulp and paper mills have not been built in Russia for 40 years and the State Commission fully supports this project’s finalization.”

According to the deputy chairman of VEB.RF, Artyom Dovlatov, the pulp and paper project will ensure deep processing of pulpwood harvested in Karelia alongside the growth of non-resource exports of products with high added value. He ensured that the investments will go towards the creation of a modern biotechnological complex with the highest possible processing power of wood raw materials, Delovoy Petersburg reported.

The Segezha Group is one of Russia’s main timber producers. It is an international forest industry holding that harvests the timber it utilizes and performs advanced wood processing operations to produce paper sacks, sawn wood, plywood, wood boards, pulp and paper, houses and heat energy. Approximately 70% of the Segezha Group’s products are exported internationally to over 70 countries, the Pulp and Paper News reported.

According to Sistema, Segezha produces 95% of market-grade sack paper, making the company one of the world’s largest exporters.

The project, apart from constructing a new production facility, also includes the modernization and reconstruction of an old Segezha pulp and paper mill, the Segezha PPM JSC. The Segezha PPM JSC is currently the third-largest producer of high-quality kraft paper globally. However, the Segezha Group has plans of increasing the plant’s production even more. The plant’s current capacity is 360,000 tons per year, however, is expected to increase to 420,000 tons after its reconstruction in 2022.

Recently some serious concerns regarding the Segezha Group’s contribution to deforestation in the Karelia region have come forth.  Segezha Group’s has access to cut 8.2 million cubic meters of forest annually, which is greater than its international competitors. However, Segezha’s CFO, Rovshan Aliyev, claims that the company is sustainable and that “for every tree [they] cut down, [they] plant a new one.” According to him, at the end of 2020, 83% of the company’s forests were certified by the Forest Stewardship Council, which is a high percentage in comparison to their international competitors.