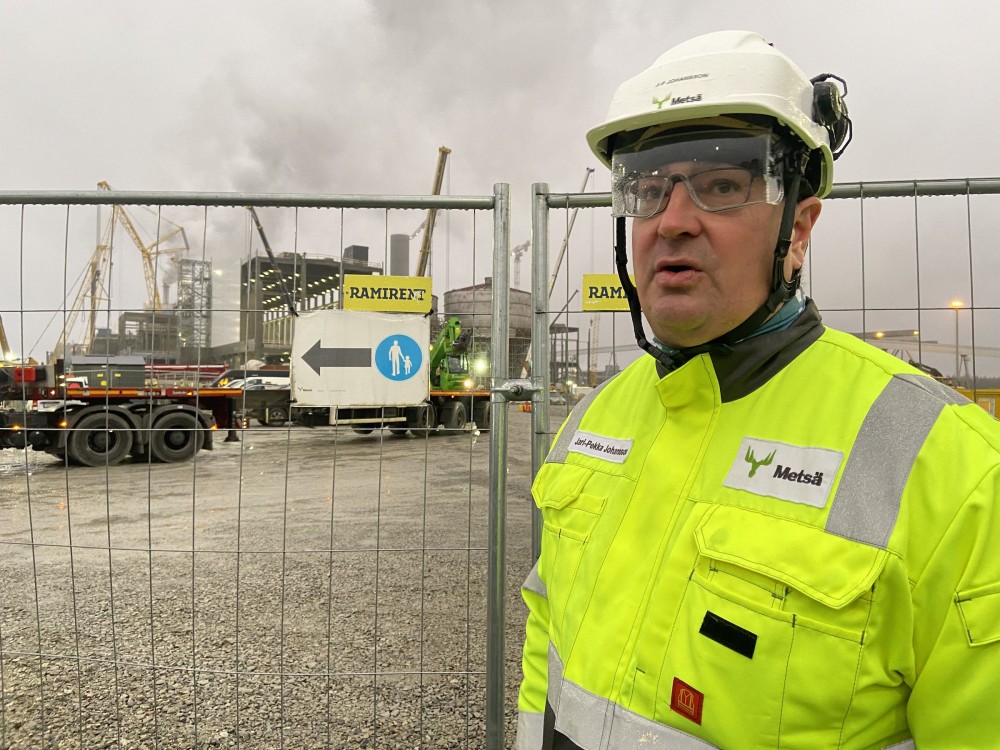 The new pulp plant in Kemi will produce more electricity than it consumes and no fossil fuel will be used.
Read in Russian | Читать по-русски
By

“We will produce 2 TWh of renewable electricity per year, which is 2,5% of Finland’s total electricity production,” says Jari-Pekka Johansson.

The project manager shows the Barents Observer how construction is in full swing at the industrial site, just outside the city of Kemi in Finnish Lapland.

2 TWh is two and a half times more electricity than the plant itself will use.

“No fossil fuel will be used at the plant,” the project manager says. “All waste products will be used. Also the bark.”

About 15,000 different employees are involved during the construction phase at Metsä’s new bioproduct mill. When in full operation by late 2024, around 1,500 new jobs are created across the direct value chain, the majority in forest sourcing.

Wood will mainly be procured from Finland.

“180 timber trucks will come every day, explains Jari-Pekka Johansson. “That is in addition to timber coming by rail.” Metsä expects nine trains arriving per day to the new unloading facility currently under construction with a new rail-track.

“No humans will be needed for unloading. All wood-stocks will be taken off the trucks and rail-wagons automatically,” Johansson tells.

About 7,6 million cubic meters of pulpwood a year will be supplied. That is more than double the current consumption at the old mill in Kemi and will give an annual pulp production of 1,5 million tons of which 70% will be exported.

Metsä is owned by over 100,000 forest owners in Finland. The company expects to expand procurements to Sweden in the future with a million cubic meters of wood annually.

With a price tag of €1,6 billion, the new factory in Kemi is the largest industrial investment in northern Finland in modern times.

Reduced environmental footprint is high on the company’s promotion for the new plant.

“The demand for Nordic softwood pulp continues to grow globally. With the new bioproduct mill in Kemi we will be an even stronger partner for the sustainable growth of our customers. The Kemi bioproduct mill is a global leader in environmental, energy and material efficiency,” says Ismo Nousiainen, CEO of Metsä Fibre in a statement issued to the media. He adds:

“No fossil fuels will be needed in production, and renewable energy in the form of electricity, wood-based fuels and heat will be sold from the mill to external customers.”

The export will be shipped out to the global markets from a new harbour facility to be built at coast to the Gulf of Bothnia.

Russia says its forests neutralize billions of tons of greenhouse gases. Scientists have their doubts