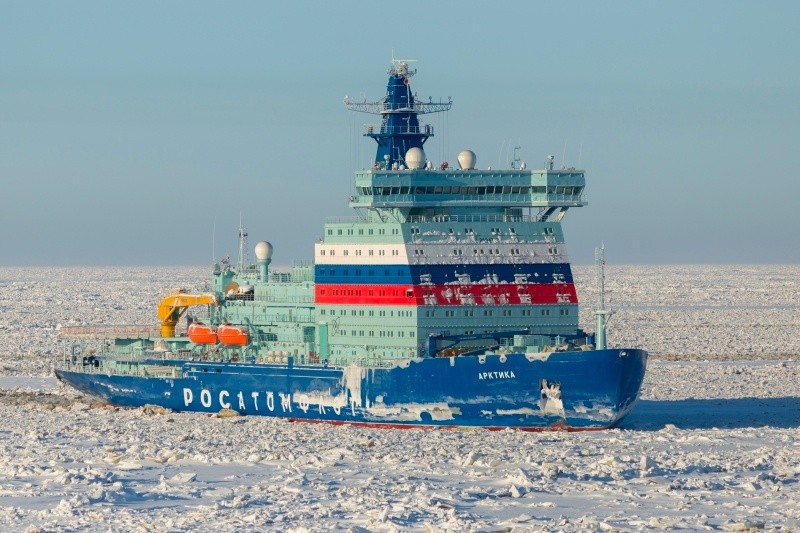 The "Arktika" and "Sibir" are Russia's two new generation 22220-class icebreakers. They are crucial for shipments through the eastern parts of the Northern Sea Route. Photo: Rosatomflot

Sea-ice still lies thick on the water as the powerful nuclear-powered ship on the 17th of June sailed into the Vilkitsky Strait. It is considered one of the most troublesome parts of the remote Arctic sea route. Currents are strong and passage requires icebreaker assistance through most of the year.

The Sibir is the first vessel that this year makes its way into the most remote and icy waters of the Northern Sea Route, the maritime passage that stretches from the Novaya Zemlya archipelago in the west and the Bering Strait in the east.

The nuclear vessel has the power needed. It is the second of Russia’s new class of powerful icebreakers tasked to keep the Northern Sea Route open for year-round shipping.

In mid-June it left the Gulf of Ob where it has escorted ships to and from the ports of Sabetta, Utrenneye and Arctic Gate terminal through the winter ice.

The destination of the Sibir is not known. But it is likely to escort LNG carrier Nikolai Yevgenov. The natural gas tanker this week loaded up in Sabetta and on Friday set eastern course in the Kara Sea.

Shipping on the Northern Sea Route is expected to get a major setback following the Russian war against Ukraine and subsequent international sanctions. The EU, USA and a great number of more countries have halted deliveries of key industrial technology to Russia and an oil embargo is soon taking effect.

However, Moscow argues that the western sanctions are only making shipping on the Northern Sea Route more important. In early June, Russian Deputy Prime Minister Yuri Trutnev underlined that better transport corridors to markets in Asia are needed as western markets close.

“The eastern operating domain is not coping with the loads, because all of Russia is turning towards the East. We must as quickly as possible extend the transport capacities of rail routes like the BAM and Trans-Siberian Railway, as well as the Northern Sea Route,” Trutnev said in a conference, Kommersant reports.

He was soon complemented by Aleksei Chekunkov, the Minister of the Far East and Arctic. Speaking in this week’s St.Petersburg Economic Forum, Chekunkov underlined that Russia’s path towards the East goes through the Arctic.

“Many people have in this forum spoken about the turn toward the East. It can only happen through the North,” the minister said.

According to Chekunkov, shipping on the Northern Sea Route will by year 2035 add as much as 35 trillion rubles to Russian GDP. The growth is to be driven be exports of oil, natural gas and coal.

Following a decree from the Kremlin, the Russian government has over the past years sought to boost shipments on the far northern route to as much as 80 million tons per year. That target will not be reached.

Back then, the international sanction regime against Russia was limited and the country could engage in comprehensive trade with the EU. Today, economic relations are paralysed and sanctions threaten to halt major parts of Russian industrial developments in the Arctic, such as the major LNG projects.

China and other friends of Russia in Asia will not be able to compensate for the lost trade any time soon.