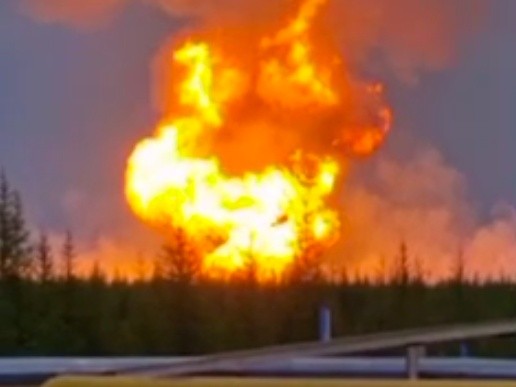 Flames goes hundreds of meters into the sky as a fire hits the Urengoy field in Russia's North.
Read in Russian | Читать по-русски
By

The fire erupted after a pipeline burst near one of the production units. The accident happened during night and emergency personnel were on site early morning 16th of June, Telegram channel Gaz-Batyushka informs.

The Urengoy is Russia’s biggest natural gas field with reserves up to 10 trillion cubic meters. It is operated by Gazprom Dobycha Urengoy, a regional subsidiary unit of national energy company Gazprom.

Production started in the early 1980s and now amounts to about 230 billion cubic meters per year.

Like most of Russia’s natural gas fields, the Urengoy is connected with pipelines leading westwards. When another fire hit the Urengoy in 2021 it affected exports to the EU and resulted in a hike in natural gas prices.

The lion’s share of the Urengoy gas is exported to Europe, but the field is also linked with pipelines that could bring the gas to the far east, as well as China.

The Arctic is Gazprom’s key production area and a lion’s share of its fields are located in the Yamal Nenets Okrug. According to regional authorities, Gazprom and its subsidiaries now annually produce more than 400 billion m3 of natural gas in the region. That includes gas from the Urengoy.