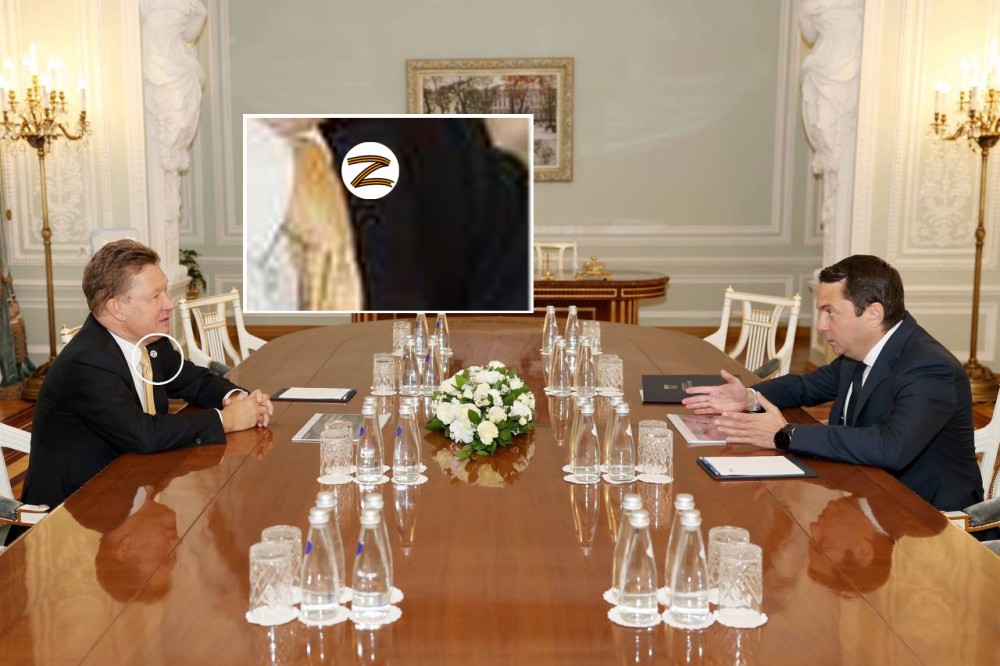 During his meeting with Andrei Chibis, Gazprom chief Aleksei Miller wore a button with a "Z."

As he halts exports to the EU, leader of the powerful state monopoly puts on a button with Russia's war symbol and meets with Murmansk Governor Andrei Chibis.
Read in Russian | Читать по-русски
By

Russia is at war, and the country’s biggest natural gas company is actively used as weapon against Ukraine and its European allies. This week, Gazprom announced that it would halt exports through the North Stream 1 pipeline, reportedly for maintenance reasons.

The measure adds pressure on the EU that from before is experiencing an energy crisis triggered by reduced Russian supplies.

In a speech delivered on Wednesday, Miller put the full blame for the energy crisis on the Union itself. Europe’s high priority on renewable energy is the problem, he argued.

According to Miller, EU countries have made “wrong decisions” following heavy pressure from “proponents of so-called accelerated decarbonisation.”

“Our traditional partners started to abandon traditional energy and the system of long-term gas market contracts, which was a blow to the reliability and stability of gas supplies,” the Gazprom chief said.

He did not tell how Russia over a long time has used gas supplies as a political pressure tool against European buyers and how gas exports since late July have been cut to only 20 percent of capacity.

Aleksei Miller also did not say a word about the war in his address. But the onslaught on Ukraine was clearly highlighted by the company leader the day before. When Miller on Tuesday this week met with Murmansk Governor Andrei Chibis he carried a button with a “Z”, the Nazi-inspired symbol of the war.

The button is clearly visible in a photo shared by Governor Chibis.

For Chibis and his far northern region the meeting with Miller appears as a success.

The region has for decades tried to convince Gazprom about the need for a gas pipeline that would allow it to reduce dependance of expensive and dirty fuel oil (mazut). So far, to no avail.

But judging from Governor Chibis, things are starting to change. According to the Governor, Gazprom is now willing to start a process on gasification.

“Gazprom is starting project developments,” Chibis said after his meeting with Miller.

The regional leader argues that the meeting with Miller was a breakthrough.

However, many locals remain skeptical. Over many years, they have repeatedly been told that gasification is on the way.

“This is nothing but fantasies,” a man says in a comment posted on the Governor’s VK page.

“Will they manage to do it in the course of this century?” another person ironically asks.