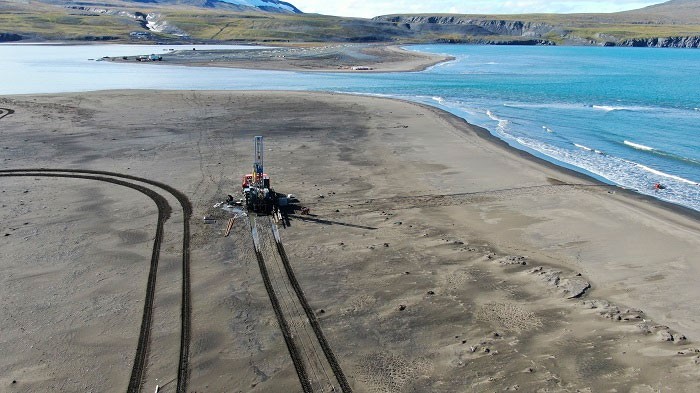 The Pavlovsky mine will be located near nuclear weapons testing areas in Novaya Zemlya. Photo: First Ore Mine Company

Nuclear power company Rosatom gets final state approval for its zinc and lead mine in Arctic archipelago of Novaya Zemlya.
Read in Russian | Читать по-русски
By

The new mine will be located only few kilometres from areas extensively used for nuclear weapons testing until 1990. Novaya Zemlya is closed military area strictly controlled by the Russian Armed Forces.

Interestingly, Glavgosexpertisa marks its press release about the approved project with a “Z,” the symbol used by Russia in its war against Ukraine.

A major industrial development is now coming up in the remote island.

“This positive decision allows the First Ore Mining Company to start the development of the Pavlovskoye project,” representatives of the company inform.

The mine will be located in the southern of the two islands, and is projected to produce an annual of 220,000 tons of zinc concentrate and 50,000 lead concentrate. The ores will be extracted from an open pit.

From before, Glavgosexpertisa has approved the building of a project seaport in Bezimyannaya Bay on the shore of the Barents Sea. It will have capacity to handle up to 500,000 tons of goods per year.

The Pavlovskoye mine holds a total of 19 million tons of ore, from which 620,000 tons of zinc, 131,000 tons of lead and 9,4 million ounces of silver can be extracted, Rosatom’s project development company VNIPIpromtekhnologia informs.

According to the project developers, a total of 7 alternative sites for the industrial facilities have been assessed along with as many as 28 alternative configurations for the seaport complex. Environmental considerations have been crucial, CEO Andrei Gladyshev explains.

“We have undertaken a big work to coordinate the project, including with environmental organisations, so that the construction works will not harm the environment,” he says.

Preparations for the mining operations have been going on for years. In the summer of 2018, engineers conducted preparatory works on site. A drilling rig collected sea bottom samples and there were also made assessments of the projected land-based parts of the terminal.

Between 1973 and 1975, the southern island of Novaya Zemlya was used extensively for larger underground nuclear tests. Of the seven detonations that took place in the area, several ventilated radioactive gases to the atmosphere because the explosions were not deep enough in the ground.

Among the nuclear devices tested in the area is also the 58 megatons atmospheric hydrogen “Tsar-bomb” detonated on October 30, 1961.