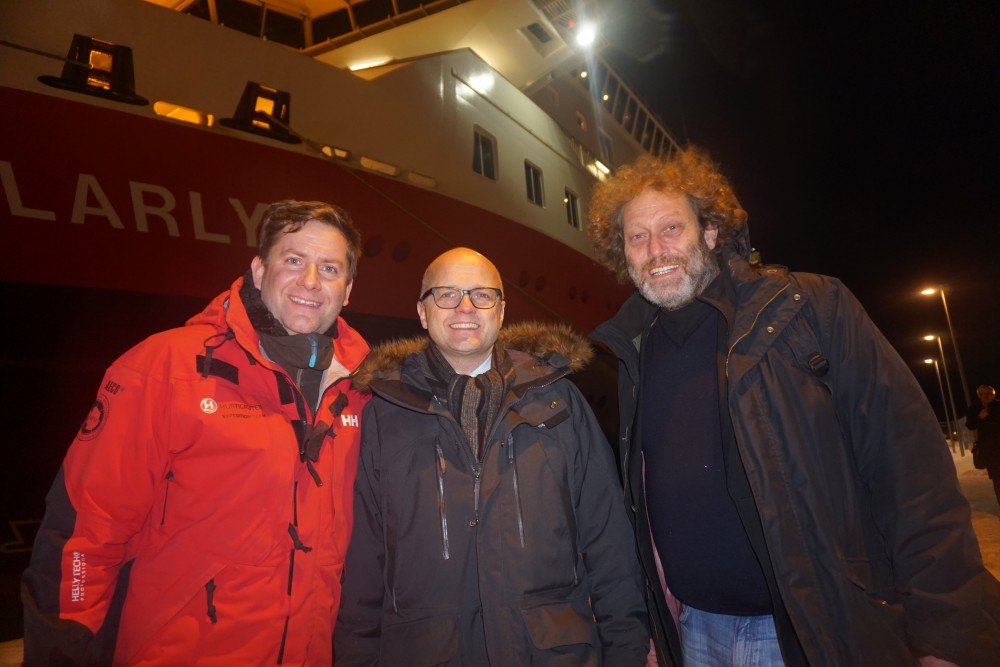 “I will be disappointed if we don’t have a vessel with battery propulsion within 10 years,” says CEO Daniel Skjeldam.
Text og photo:

Hurtigruten, marketing itself as the world’s most beautiful voyage, looks at new possible ways to reduce its environmental footprints and fuel consumption.

This week, Daniel Skjeldam, CEO of Hurtigruten invited Norway’s Minister of Climate and Environment Vidar Helgesen together with Bellona founder Frederic Hauge on board the “Polarlys” to discuss possibilities to introduce electric propulsion operated on battery power on Hurtigruten’s cruise vessels.

“We want to be the first cruise-liner to introduce the latest within green energy,” Daniel Skjeldam says.

Skjeldam hopes for incentives from the government when planning next generation green propulsion engines.

“New technology is expensive. Should we manage to reduce the emissions from shipping in the same way as for private vehicles there is a need for political measures, carrot and stick, to stimulate the market,” Daniel Skjeldam says.

“Just like Norway successfully are doing to boost the sales of electric cars.”

Hurtigruten has partnered with the Norwegian environmental NGO Bellona and says the ambitions are to provide zero-emission voyages in the future.

When will your first vessel run on electricity from batteries?

“I will be disappointed if we don’t have a vessel with battery propulsion within 10 years,” Skjeldam says to the Independent Barents Observer.

Along the coast of Norway, Hurtigruten’s daily voyages have the advantage of making several port calls per day and when the vessel is at port, batteries can be charged from the grid.

Last spring, Norway put into operation the world’s first all-electric battery-powered ferry. Named “Ampere” the ferry sails the route across Sognefjorden on the west coast. With a capacity to carry 360 passengers and 120 cars, the ferry crosses the fjord with a speed of 10 knots. In port, it takes just 10 minutes to recharge between each trip.