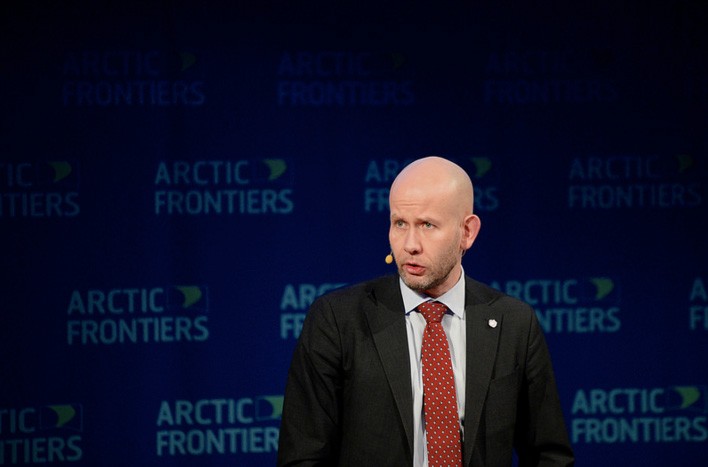 There is a major diverge in positions between Norwegian oil minister Tord Lien and minister-colleagues from Sweden. Photo: Pernille Ingebrigtsen/Arctic Frontiers 2016

While the Norwegian oil minister underlines that Norway will continue its drive for Arctic oil, three Swedish ministers in a joint column say now is the time to stop.
By

Speaking in today’s Arctic Frontiers in Tromsø, Minister of Energy and Petroleum Tord Lien repeated that Norway will continue to be a stable energy supplier to the EU and that Arctic hydrocarbon development remains a part of Norwegian priorities.

”Norway has significant untapped oil and gas resources in the Barents Sea, and wants to remain a long term and secure supplier of gas to the EU”, Lien said, adding that ”we will continue to award new licenses in mature areas every year”.

Minister Lien is a staunch supported of oil drilling in the north and recently even claimed that the low oil prices are increasing the likelihood of exploration off the coast of the Lofoten and Vesterålen areas.

The Norwegian government is currently in the process of preparing for its 23rd License Round which includes a big number of new Arctic blocks.

While Minister Lien and his fellow ministers clearly remain hungry for Arctic oil, their colleagues in neighboring Sweden think otherwise.

”A major share of the world’s oil resources must remain in the ground if we are to keep global warming as far below two degrees as possible”, the three ministers say and add that ”drilling in the Arctic is both expensive and risky”.

The newspaper comment is written as Sweden steps up its environmental engagements in the Arctic.

”Now, the government steps up its work to protect Arctic nature. We want to see a stronger focus on climate, legal protection of vulnerable nature and risk prevention of oil drilling and over-fishing”, the columns reads.

”As country with high environmental ambition, Sweden has an important role to play internationally. At the same time as we demand action from the other Arctic countries, the Government takes responsibility back home”, the ministers underline.

The new Arctic initiative was presented by Minister Persson at the Arctic Frontiers in Tromsø, Norway, this week.