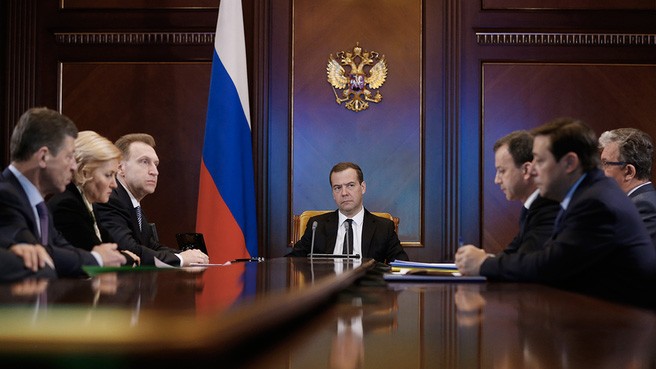 Serious faces around the government table as the Russian economy continues down. Photo: government.ru

After a 3,7 percent shrinking in 2015, the country’s economy started the new year with continued decline.
By

According the Ministry of Economic Development, the Russian economy in January 2016 shrunk by 2,5 percent compared with the same month last year. The decline follows a 3,5 percent decline in December 2015 and 3,7 percent in all of 2015.

The economic downturn was accompanied by a January year-on-year drop in salaries by as much as 6,1 percent.

According to the Ministry’s monthly monitoring report, the economic downturn has not yet resulted in any increase in unemployment. On the contrary, unemployment figures in the country in January dropped to 5,6 percent, the report reads.

Industrial production in the first month of the year showed only a slight increase of 0,3 percent. That, however, follows a downturn of 0,2 percent in December. The growth was due mainly to the electric energy generation sector which increased by more than two percent. Meanwhile, the country’s industry processing industry declined by 0,2 percent.

“We must prepare for worst-case scenario in economy”