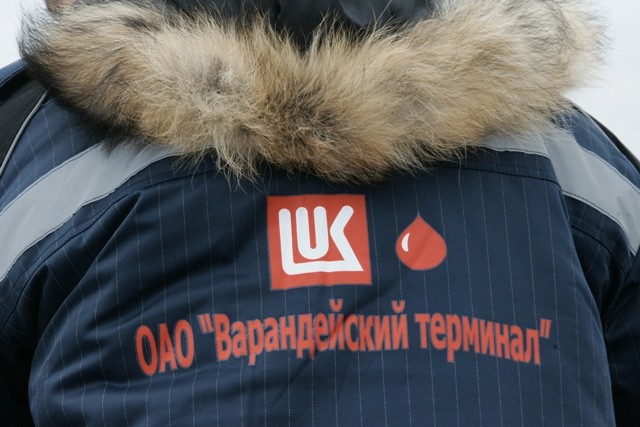 With its stake i Norwegian blocks, Lukoil gets a foot into offshore Arctic oil. Photo: Lukoil.ru

The inclusion of the company in the license partnership is an international recognition of our unique offshore experience, Lukoil says.
Read in Russian | Читать по-русски
By

As relations with Russia remain marred by political controversies, Norway opens the door for a new east-west oil partnership in the Arctic.

As part of its 23rd License Round, the country awards Russia’s biggest privately-owned oil company Lukoil a 20 percent stake in a license located directly along the borderline to Russia.

«The offered participation in the license for exploration and production at the Fedynsky High, at the territory which Russia and Norway were pacing to finally reach the agreement on for 30 years, is a confirmation of international recognition of LUKOIL’s unique experience obtained at Caspian, Barents, Baltic, Black sea and African fields», the Russian company says in a comment to the Barents Observer.

Lukoil is the only Russian awardee in the license round. The second Russian bidder, state company Rosneft, is not on the list presented by the Norwegian government.

«LUKOIL was the first Russian oil company pre-qualified in 2011 as an operator on the Norwegian Continental Shelf and became the only Russian company, which was granted a participation in the new project within 23rd Round. We believe the Company’s knowledge and experience provide competitive advantages both for Russian and Norwegian Shelf», the company underlines.

Operator Det Norske says to Barents Observer that the PL858 license area is «exciting» and that the company has «great expectations».

«We see this as a show of confidence», company press spokesman Rolf Jarle Brøske underlines. The Norwegian company has no previous cooperation experience with Lukoil.

The border delimitation agreement from 2010 lays down detailed procedures for cross-border activities in the area. If hydrocarbons are discovered on one side of the border, the other side will have to engage if a field is to be developed. Press spokesman Brøske underlines that Det Norske  will observe the requirements of the delimitation agreement «in close cooperation with Norwegian authorities»

Norwegian analyst and businessman Johan Petter Barlindhaug says to the Barents Observer that a major oil discovery in the license area would significantly strengthen the role of Lukoil in the region. «It would give the Norwegians a Russian on their side», he argues.

According Daniel Fjærtoft from the Sigra Group, the PL858 license area is exciting because Lukoil is not approved for offshore projects in its Russian home marked. «If a discovery is made [in the license area] it will be a paradox that Russian private capital appears welcome in Norway, but not in Russia».

Arild Moe from the Fridtjof Nansen Institute sees the inclusion of Lukoil as «a cooperative approach from the Norwegian side».

Lukoil has experiences from offshore drilling in the Caspian Sea and is a major oil producer in Arctic land projects in the Nenets Autonomous Okrug and the Komi Republic. The company has also looked at several projects in Russian territorial waters, near the coast, among them in the Khatanga Bay in the Laptev and bays in the Barents Sea, Pechora Sea and Sea of Okhotsk.