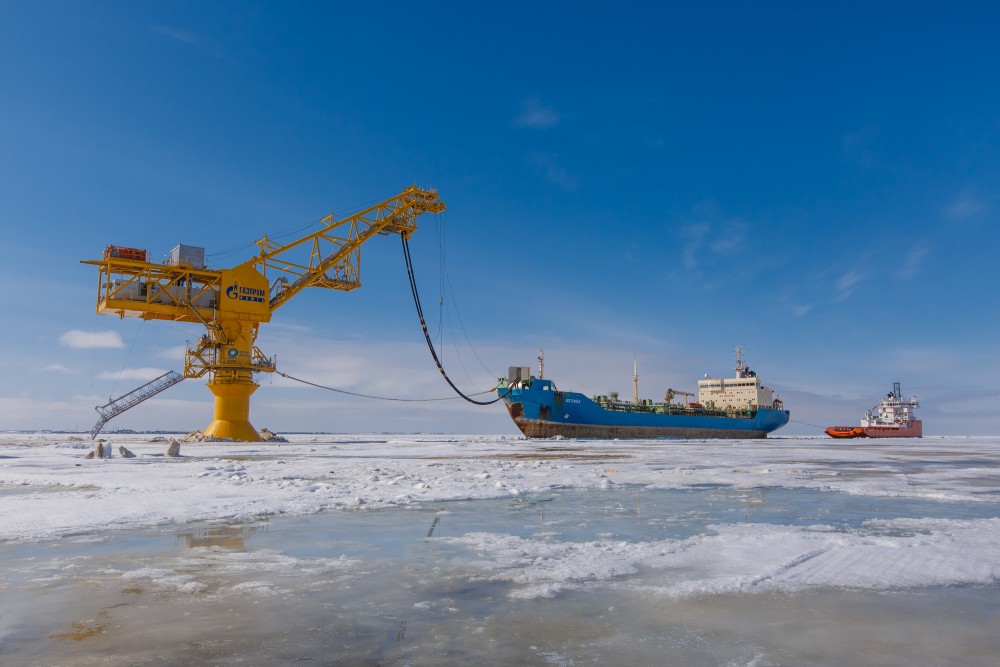 The "Arctic Gate" oil terminal in the Gulf of Ob. Photo: Gazprom-neft.ru

On direct video link from his situation room, the President officially launches the Novy Port oil terminal.
By

«We now start a new phase in the development of Yamal», Vladimir Putin today said in direct televised link. «This is a significant, big event», he added.

In the other end of the line were Aleksey Miller, head of Gazprom, and Aleksandr Dyukov, leader of Gazprom Neft, the oil company. On the president’s command, the two company leaders pushed the button, which symbolically started the terminal pumps and tapped oil into a connected tanker.

Gazprom Neft has over the last three years invested 186 billion rubles (€2.54 billion) in the development of the Novy Port oil field and the adjacent terminal on the coast of the Gulf of Ob. The investment, which is among the biggest in Russia over the last years, has given the company a new major Arctic oil hub.

The terminal, officially named the Arctic Gate, is situated in the middle of the Gulf of Ob, about 3,5 km off the banks of the Yamal Peninsula. The 80 meter high facility, which is connected by pipeline to project infrastructure at Cape Kamenny on the bank of the peninsula, has capacity to handle 8,5 million tons of oil per year.

The terminal facility was installed by the heavy weight crane ship ”Oleg Strashnov”  in late September 2015.

«The terminal allows us to conduct loading of oil in extreme climatic conditions», Aleksey Miller told the President, a press release from the Kremlin reads. «Temperatures in the area can drop to minus 50, the winds can have a speed of up to 40 meter per second, and the ice can be two meters thick», he added.

According to the company leader, the terminal has zero-emission technology, which makes it impossible for polluting substances to get into the Ob waters. The facility is fully manned from a control room at Cape Kamenny.

«There is no analogue to this terminal anywhere in the world, there are no industrial objects with such characteristics north of the Polar Circle», Miller underlined.

«Without doubt, the launch of the terminal implies a serious step ahead for Russia’s further development of the rich hydrocarbon reserves of the High North, as well as for the development of the Northern Sea Route», the Gazprom leader added.

Gazprom Neft, the project operator, in 2018 intends to boost production to 6,3 million tons, the company informs in a press release. Company representatives earlier said that production in 2016 will amount to 2 million tons and then be increased to four million tons in 2017.

The Novy Port oil is shipped from the shallow waters of the Ob Bay to Murmansk where it is reloaded into the “Umba“ terminal tanker.