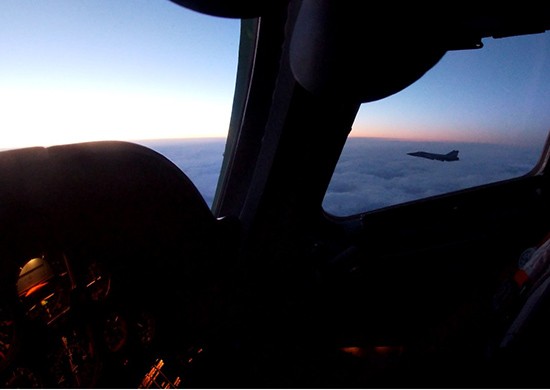 One of the Northern Fleet's fighter jets seen from the cockpit of a Tu-160 strategic bomber flying over the Arctic. Photo: Press Service of the Defense Ministry

A pair of Tu-160 strategic bombers showed muscles outside Norwegian air space and in the European Arctic on Tuesday. Newly deployed naval aviation fighter jets at Novaya Zemlya escorted the aircraft for part of the route.
Read in Russian | Читать по-русски
By

The flight, which lasted for 12 hours, took place over Russia and the Barents-, Norwegian- and Greenland Seas, the Defense Ministry in Moscow informs.

Russia’s strategic bombers are based at Engels Air Force Base near Saratov in southwestern Russia and have to fly north for exit to international air space without violating other nations borders.

The strategic bombers flew out to the Barents Sea from the Kola Peninsula before the route continued further north and west outside Norway. Then, according to the Twitter user “Hunters Note”, who tracks military aviation signals, the aircraft flew west in the Greenland Sea near Jan Mayen before heading north of Svalbard, across Franz Josef Land towards Novaya Zemlya where another pair of MiG-31 from Rogachevo Air Base escorted the strategic bombers over the Kara Sea en route south.

Two F-16s on Quick Reaction Alert (QRA) for NATO from Bodø Air Base were scrambled and the Norwegian pilots met the Russian aircraft outside Finnmark.

“Our QRA F-16s were scrambled. They identified the Russian aircraft in international air space up north. This is normal procedures,” said spokesperson for Norway’s Joint Headquarters, Jørn Hammarbeck, in a phone interview.

Soldiers from the Coastal Ranger Command (Kystjegerkommandoen) will have a key role in the war game with support from the Army’s Intelligence Battalion, the Navy’s missile corvettes, and F-16 fighter jets from the Air Force.

Collaboration behind enemy lines after an imaginary attack on Norway is the scenario to be trained. The littoral combat theatre will be along the coast all the way to the country’s northernmost region Finnmark, according to a statement from the Defense Ministry.

Military tensions in North Atlantic and Arctic waters are on the increase, as Russia is investing heavily in bases and weapons systems in the Arctic, including near Norway’s northern borders, the Norwegian Intelligence Service warns in its annual threat assessment report released on Monday.

A first shift of crews and MiG-31BM takes place at the Rogachevo airfield in Novaya Zemlya, the Barents Observer reported this week.

The U.S Air Force is reportedly planning a Bomber Task Force (BTF) deployment, with four Rockwell B-1B Lancers, to the Norwegian base of Ørland later in February.

“Operational readiness and our ability to support allies and partners and respond with speed is critical to combined success,” said Gen. Jeff Harrigian, U.S. Air Forces in Europe and Africa commander in a statement.

“We value the enduring partnership we have with Norway and look forward to future opportunities to bolster our collective defense,” he said.

This is the first-ever U.S. Air Force bomber deployment to occur in Norway.

Ørland Air Base is located west of Trondheim some 1,000 from Russian territory, but the American aircraft have still triggered a harsh reaction from Russian authorities.

In a comment posted on Facebook, the Russian Embassy in Oslo underlines that Norway is putting security in the north of Europe and Arctic in jeopardy with the deployment.

Meanwhile, the Russian buildup in the Arctic has “only defensive purposes”, the Embassy underlines.

According to the diplomats, the modernization of military infrastructure in the Arctic is to help promote economic activities in the region, and also improve Arctic monitoring, search and rescue, oil preparedness and fishery management.

Among the tasks are both anti-aircraft operations and anti-submarine defense training.