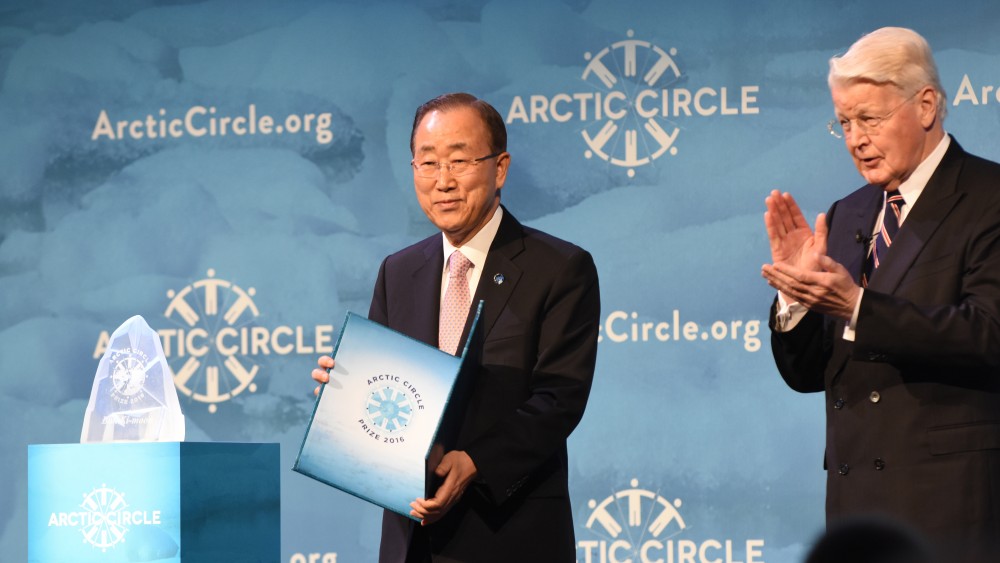 Ban Ki-moon receives the Arctic Circle Prize 2016 for his leadership in bringing together the Leaders of the world on a Climate agreement. The prize was announced by Iceland’s former President Ólafur Ragnar Grímsson in Reykjavik this weekend.

In his thanks speech, the Secretary General addressed the importance of Indigenous Peoples traditional knowledge in fighting climate change.

“Let us remember those on the frontlines, the many indigenous peoples who have lived here for centuries. They contribute to the Arctic’s diversity and sustainable resource management. Yet, as the developing countries, those who have contributed least to climate change, they are hit first and hardest by serious consequences for their safety, health and human rights,” Ban Ki-moon said to the 2,000 delegates at the Arctic Circle Assembly.

He called on governments to respect Indigenous Peoples’ rights.

“Indigenous Peoples are also affected by national strategies for climate change adaptation especially renewable energy initiatives such as windmill farms and hydropower projects, which often take place in their territories. This has created tension and brought displacement and disposition. The UN Declaration on the Rights of Indigenous Peoples is our instrument for how to recognize, and respect Indigenous Peoples’ full oracles and initiatives.”

Ban Ki-moon said Indigenous Peoples’ traditional knowledge on living in harmony with the nature is a contribution to help achieve the sustainable development goals and prevent climate change.

“We have often seen many specialist, governments and industrial policies in the name of economical development, have been fighting against nature. Indigenous People have centuries of old wisdom of to live harmonious with the nature. We have to learn those wisdoms from them. I urge you to ensure that Indigenous Peoples, their rights and contributions will remain central as we address theses challenges,” the Secretary General said.

Øyvind Ravna, Professor at the Faculty of Law with the Arctic University of Norway in Tromsø says Ban Ki-moon’s statement sends a strong message to governments in Arctic nations.

“Governments, like in Norway, that have signed the ILO conventions on Indigenous Peoples’ Rights must acknowledge the commitments they have. With Ban Ki-moon’s speech today, the message is crystal clear. Learning from, and dialog with Indigenous Peoples is a part of the solution to climate changes,” Ravna says to the Barents Observer.

The Professor is an expert on Norway’s international legal obligations to the Saami in Finnmark, Norway’s northernmost county.

“I have seldom listened to such a high ranking official spending considerable parts of his speech on Indigenous Peoples issues. He highlighted all our speaking points on climate action,” Retter says.

“This shows that the United Nation system really works. We have a Special Rapporteur on the rights of Indigenous Peoples to the UN, and listening to Ban Ki-moon today, we clearly see that our views are taken into consideration on the top level,” Gunn-Britt Retter says.