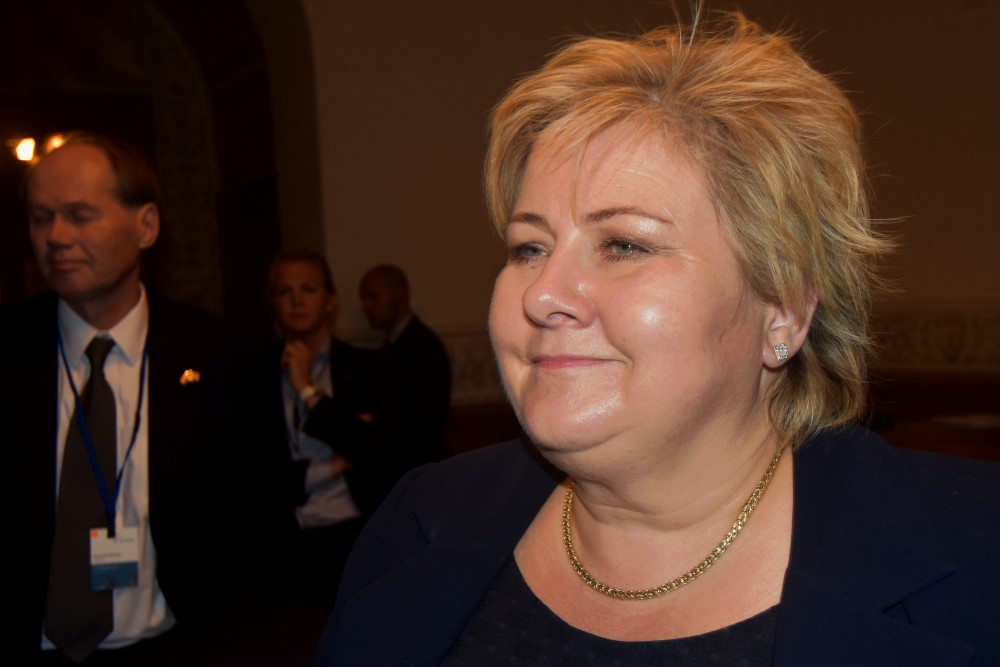 Norway’s Prime Minister Erna Solberg invites all her Nordic colleagues to Tromsø next January. Russia’s Foreign Minister might be in town at the same time.
Read in Russian | Читать по-русски
By

“Arctic cooperation is one of many dimensions of the Nordic dialogue, and the Nordic members of Arctic Council agree that Russia is acting responsibly in the Council; that makes it an appropriate venue for dialogue in the north,” Erna Solberg says to the Barents Observer.

Open dialogue in the north, however, does not change the colder political relations between the Nordic countries and Moscow.

“It does not solve the challenges we face with Russia in other arenas,” the Norwegian Prime Minister says.

Last week, all Nordic prime ministers met with their Baltic colleges in Copenhagen, Denmark, and discussed the tensions with Russia.

High-level political talks with Russia were not on the agenda.

“That is out of question,” Prime Minister Stefan Lövfen said at the following meeting with journalists when asked about possibilities to invite President Vladimir Putin to Sweden for talks.

Now, the Nordic prime ministers might get a chance to meet with Russia’s Foreign Minister Sergey Lavrov in Norway’s Arctic capital Tromsø on January 24-25 next year.

Barents Observer has previously reported about Norway’s invitation sent to foreign ministers of 12 countries to attend the Arctic Frontiers conference in Tromsø. Among the 12 is Russia’s Sergey Lavrov.

The plan is to have the prime ministers meeting one day and the foreign ministers to meet the next.

It remains to be seen who will come.

“We have currently not received replies to all invitations,” Erna Solberg says.

If all prime ministers from Iceland, Sweden, Finland and Denmark, in addition to Erna Solberg, travel to Tromsø on January 24 and 12 foreign ministers gather on the 25th, the Arctic Frontiers conference will be the largest gathering of top politicians north of the Arctic Circle in modern history.

Arctic Frontiers is an annual conferance with focus on sustainable development in the north, a meeting place for researchers, businesses and politicians on national and regional levels.

Lavrov has not been in Norway since October 2014, then celebrating the 70 years anniversary of the Red Army’s liberation of Norway’s northernmost county, Finnmark. Neither has the Norwegian Foreign Minister, Børge Brende, been to Moscow since Russia’s annexation of Crime in March 2014.

None of Brende’s Nordic colleagues are on the invitation list to Tromsø, a list that in addition to Sergey Lavrov includes foreign ministers from Argentina, Australia, Canada, France, Italy, Japan, Malta, the Netherlands, New Zealand, Panama, Singapore and South-Korea.

“It is important to invite Russian Foreign Minister to Norway as our two countries have many common interests in the Arctic and our conference is an important arena for dialogue,” Øvretveit writes in an e-mail to the Barents Observer.