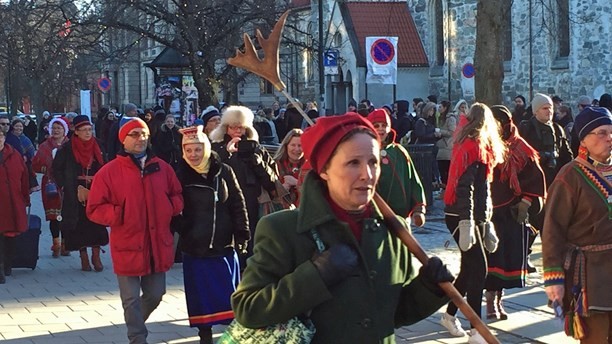 Samis from across Scandinavia gather in Trondheim to mark centenary celebrations of the first Sami Congress in 1917. Photo: Helene Alm/Radio Sweden

The indigenous Sami are celebrating their National Day, Monday, beginning a week of events to mark the 100th anniversary of the first Sami congress in 1917.
Read in Russian | Читать по-русски
By

Feted every year on February 6, the date marks the first Sami congress, which was held in Trondheim, Norway in 1917. The date has been recognized as the Sami National Day since 1993.

The Samis, previously known as Lapps, are the indigenous people of northern Scandinavia, and today they number around 85,000. Twenty thousand live in Sweden, perhaps twice as many in Norway, and smaller numbers in northern Finland and the Kola peninsula in Russia. The samis are regarded as the oldest peoples of Europe.

They once faced oppression of their culture, including bans on use of their native tongue.