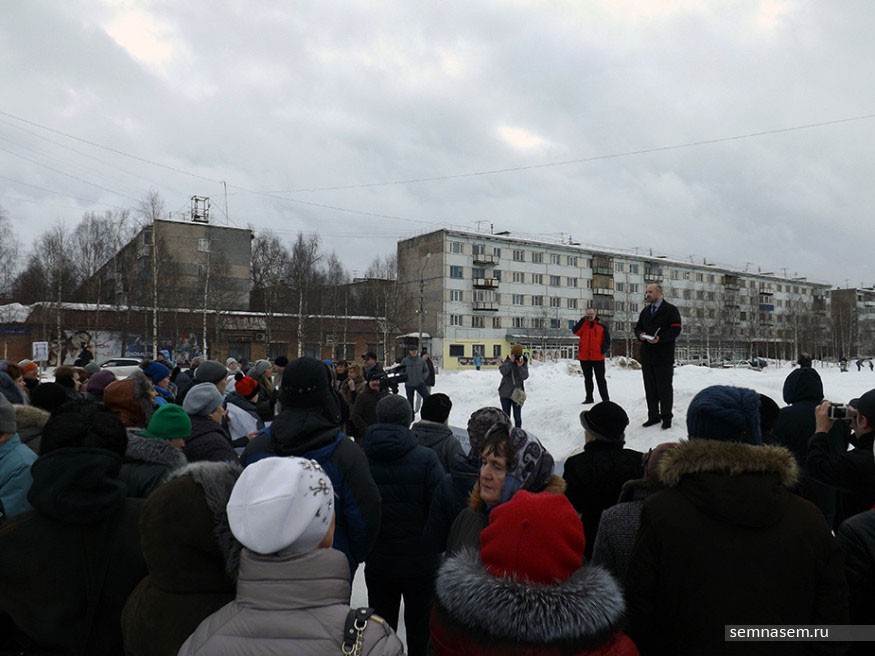 The central square in the Komi town reminded a playground, as parents with children in strollers assembled to protest a new republican law limiting compensation for child day care centers.
By

One of the organizers of the protest, civic activist Egor Russky, climbed up on a huge pile of snow to announce that the regional law 144 was «a kind of a sabotage against state policy”, because it according to him, as well as lawyers and the Ministry of education, is in conflict with the Constitution.

According to Russky, deputies of the State Council of Komi and city council of Ukhta had been invited to attend the event, but none of them came.

«The United Russia party, which only six months ago talked about support of families with many children, has made its choice. Head of republic Sergey Gaplikov, who came here and conducted public hearings, has introduced the bill and consequently erased two points of his own party program. We have to express our opinion», the activist underlined and passed on the word to fellow protesters.

Last December, Head of Republic Sergei Gaplikov introduced a draft law on the introduction of need criterion for families’ support to have children in day care centers. From February 1, 2017 only families with average income less than 1,5 times the subsistence minimum will receive compensations for attending child day. Until now, families could expect compensation at a rate of 20 percent for one child, 50 percent for the second and 70 percent for the third child.

After half an hour, more people with children appeared in the square, more than a hundred. Some parents organized an improvised kindergarten, where they played with the kids while the other moms and dads listened to the speakers.

«While we previously paid five thousand for child center, now we will pay seven thousand – a difference of two thousand that our government wants to put in its pocket, what an absolute disgrace!» Victoria, a mother of several children said emotionally. «These money are very important for us, we could spend it on education, on additional activities, educational events, even buy candies to children! And our government wants to put them in its pocket! I urge all concerned to collect signatures and to convey to the Government of the Republic of Komi that we refuse to give them the money! This is our children’s money!»

Yekaterina, another protester, described how the law has affected the income of her family:

«We currently do not meet the need criterion, even though my husband’s wages were cut. We have a mortgage, a small car loan… I mean it hits us in the wallet seriously! Children go to additional activities – so now we have to refuse, and other times we won’t buy them fruits. It is terrible that our officials have formulated federal law to suit themselves and decided to curtail our rights even more.»

During the event, the police detained a drone operator, who filmed the rally. According to the policeman, who declined to identify himself, a staff member of the Federal Security Service ordered him to detain the operator. Protesters responded to the detention by shouting «Shame!».

«All the posters have been approved by lawyers. They don’t right to take your posters», activist Russy instructed picketers. The participants decided to «send the posters to Gaplikov in a parcel».

Read the full story at 7x7-journal.ru