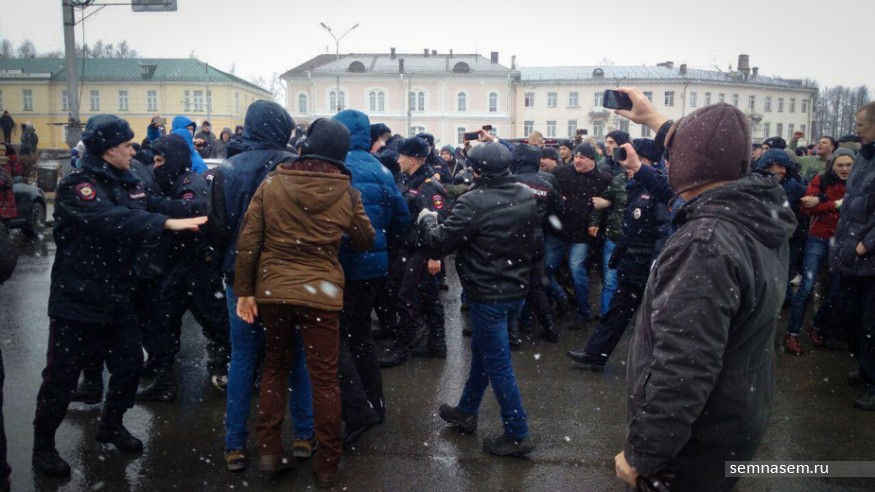 People assembled in central squares of key cities to protest against corruption. Police detentions were made in Karelia and the Komi Republic.
Read in Russian | Читать по-русски
By

«Corruption is stealing our future» said one of the posters displayed by a young man in downtown Murmansk on Sunday. He was one of more than hundred people who had gathered in the Arctic city to express lack of confidence with government leaders.

Photos taken by a local blogger show the many young people gathering in a downtown park.

The rally was organised as part of a country-wide protest against government corruption. In the frontline was opposition politician Aleksey Navalny and his Anti-Corruption Foundation, which recently revealed major corruption schemes organised by Prime Minister Dmitry Medvedev.

In Murmansk, the protest proceeded without police interference. That was not the case in neighbouring regions. In Karelia, between five and seven protesters were detained by police, 7x7-journal reports. According to the regional newsmaker, «several hundreds» had gathered on the central Kirov square in a rally which was «the biggest in two years».

Also in the Komi Republic there were police detentions. In regional capital Syktyvkar, leading coordinator of the rally, Anatoly Misharin, was taken in by police, 7x7-journal reports. There were about 300 people taking part in the event.

In Ukhta, one of the other big cities in the region, police detained five of the about 50 people who attended the rally, the online news magazine reports.

Meanwhile, in Arkhangelsk, the city which later this week will be visited by President Vladimir Putin and several other top federal representatives, the local city authorities did not allow the protesters to hold a rally. The coordinators of the event have called the rejection «unconstitutional» and promise to hold the rally later, 7x7 reports.

Aleksey Navalny and many of his companions were forced to spend the night behind bars. According to preliminary estimates about 900 people were detained in Moscow alone. Up to 25,000 people took part in the rally, the Anti-Corruption Foundation informs. The rally had not been approved by the local Moscow city authorities.