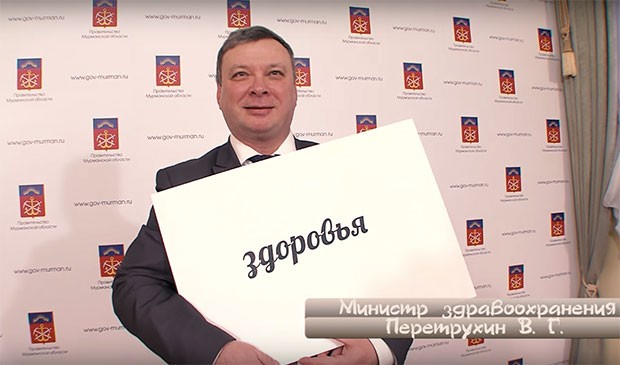 Minister Valery Peretrukhin believes that complaints on social networks about the current state of medical care are lies.
By

Meanwhile, there is a 44 percent shortage of doctors in the region and deputies have found that the oncological center is still using equipment from 1984.

Minister of Health, Valery Peretrukhin has made the above statement in his report to the deputies assembled at Murmansk Regional Duma on 18 April, assessing the state of affairs in his department for the past year.

But the real situation, to put it bluntly, is not really all that wonderful. And in the end, the report shows the difference between the federal standards for the cost of providing medical care and how it is financed locally.

The cost of an overnight stay in the hospital was 14 percent lower than planned and 25 percent lower than the federal standard. The federal standard is 3,077 rubles (about $55 a day), and in Murmansk, the number was only 2,284 ($40). Included in the cost are the “half cutlet” (minimal serving size) meals that the patients get and in the case of hospitalization, the hospital have received 16 percent less than federal norms say should be provided. Financing one day of non-private care in a shared ward is below the federal norm by 53 percent (1,608 rubles ($28.50) instead of 3491 ($62).

Please, do not ask why the old people do not have enough diapers. Volunteers have to periodically collect disposable diapers for the hospice themselves. And not only is there not enough money for the patients, there are also not enough doctors.

It is interesting to think about why this situation exists if the doctors’ salaries are really as high as the government claims. In Peretrukhin’s report, the average doctors is paid 65.000 ($1,159 a month), the medical workers (nurses and specialists) are paid 36.000 (about $640) and junior medical staff 25.000 ($445).

After the report, the debate raged on at the Duma.

«In Umba (an urban locality on the Kola Peninsula), the cardiologist receives only 20 thousand ($350), holidays were reduced for doctors by 7 days, allowances for stress and tension were reduced from 1 5% to four. Junior nurses have been told to clean floors. Weren’t they here to interact with patients? No? And now they are not here at all!»

«Yes, because our doctors have lower salaries than the national average! I asked the doctors if any of them gets this “average salary”. No one does!»

«Starting on May 1, we will raise salaries. But bonuses and incentive payments will automatically decrease.»

«You consider the average salary taking into account only departmental surgeons and higher and for them, there is a lot of money paid for those services. And by the way, this is the second assembly I can’t get a straight answer from you. Where is the exact sum for the volume of paid services we have in public medical institutions?»

It is not only Chernyev who can’t get a straight answer from the Ministry of Health. Natalia Vidishcheva was outraged by the new manner of answering questions the Ministry of Health uses. All inquiries now receive the answer: This is a «medical secret». The minister agreed in response to the prosecutor office, saying that he had no right to issue data relating to patients.

It turns out that deputies can no longer act on the interests of a citizen who applies to them unless that citizen gives the deputy power of attorney in their name. So now, applying to the Ministry of Health is like in a run to the Don river: there is no extradition. Now, any information can be hidden and referred to publicly as a medical secret. And you can also deny the obvious as in the case of the number of ambulances in Murmansk.

Natalia Vedischeva asked the minister why people wait 2-3 hours for an ambulance. And this is how he replied:

«According to the regulations one «ambulance» is required for every 10 thousand people. There are 30 brigades in Murmansk. The standard estimated time of arrival is 20 minutes.

That’s funny. A month ago I talked to a paramedic myself. At the time, I did not want to go to the hospital and I told the doctors that if I got worse at night, I would call.

«Well, you should not wait», the paramedic replied.»Later on, you will have to wait about two hours because there are no other ambulances.»

The conversation also touched on the oncology center. On the night the deputies visited the cancer treatment facility, what they saw left a strong impression.

«What kind of people are you to keep people with such a disease in such conditions?!»

«I thought it would be bad there, but for it to be that bad …»

«30 million ($531,000) have been invested in capital repairs on the building and we will be finished by the end of the year».

«And how much to replace the old equipment? So after everything else, does this include replacement costs for the 1984 machines?»

In the end, Andrei Chernev also disavowed the Minister’s argument prepared for journalists about the reduction in mortality rates. This was about the fact that in 2016, this indicator went down and now the mortality rate in the region is lower than in other regions of the North-West. Peretrukhin did not just tell us the information, he added that we journalists should «write it down!» So, we wrote it down.

Chernev responded, though faltering at the end.

«You don’t have to call attention to the death rate statistic: it always migrates to the middle lane. People from the region are living to an especially old age. Of course, the number declines - but the growth of cancer victims by 6% is more of a real indicator.»

In the Ministry of Health, they did have one more indicator of their success. According to the minister, a record was set in one of the medical institutions: patients’ appeals on

Vkontakte and Twitter were answered in just 3 minutes. True, as Valery Peretrukhin added, the complaints were mostly not confirmed:

«90 percent of what is written in social networks about our medical institutions is not true. They make this stuff up themselves.»