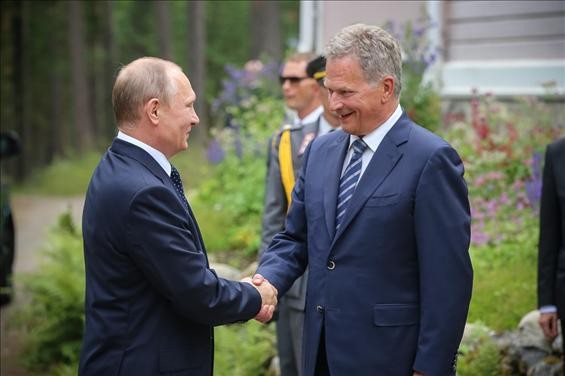 President Niinistö welcomed President Putin to Finland outside Hotelli Punkaharju. Photo: Juhani Kandell/Office of the President of the Republic of Finland

The two leaders held a joint press conference and said they discussed subjects which ranged from environmental and energy issues to topics concerning defence and bilateral cooperation. Putin also said that any tightening of sanctions by the US against Russia would be a violation of international law.

Finnish President Sauli Niinistö’s and Russian President Vladimir Putin’s press conference at the historic Hotel Punkaharju in eastern Finland was delayed by about thirty minutes. Niinistö apologised to the large group of journalists and photographers, explaining that he and Putin had a lot to discuss.

In his initial remarks, Niinistö thanked his Russian counterpart for coming to celebrate Finland’s centenary, and then described the afternoon’s talks.

Putin said that Russia’s naval parade, which is scheduled to take part off the coast near St. Petersburg over the weekend, is not sabre rattling, but recapturing a one hundred year old tradition.

Referring to Russia and China’s joint naval exercises in the Baltic Sea which wrap up at the end of this week, Niinistö said such situations are a part of living in a world with military powers.

Putin said Russia’s cooperation with China was a strategic one as much as it was a political, military and an economic strategy.

“More military exercises will be organised with China, on land and at sea,” Putin said. “It is a stabilising factor for the whole world. No third country should feel threatened. We are not creating a military blockade or alliance.”

“We didn’t have time to discuss the situation in Syria, or [another] topic I wanted to talk about – disarmament. We’ll surely talk about it during our boat ride or later in the evening,” Niinistö said.

Later in the day the two leaders are scheduled to take a steamboat ride towards Olavinlinna Castle, in the nearby town of Savonlinna, for dinner and later attend an opera performance by the Bolshoi Theatre.

Putin confirmed that he and Niinistö would discuss Syria later during his visit.

Putin said he regrets that relations with the United States have deteriorated, saying the issue of US-Russian relations has become an internal, political one in the US. He said it is regrettable because cooperation would help both countries. He said common interests of Russia and the US are terrorism, environmental and economic issues.

Answering a question from a Russian journalist about the looming threat of the US tightening sanctions against Russia, Putin said such a move would be in violation of international law.

Putin said that Russia is dealing with the threat of increased sanctions with reserve, but said that at some point there will be a point when Russia would respond.

Putin said Russia would likely come forth with a response once the US’s final legislation on increased sanctions is finalised by the US Senate.

Niinistö said he and Putin did not see eye-to-eye about the reasons behind the possible sanctions.

Niinistö said that he and Putin discussed the Krasnyi Bor dumpsite near St. Petersburg, Russia. Krasnyi Bor is a hazardous waste landfill, colloquially known as the “chemical Chernobyl.”

The pair also talked about a water treatment facility in Kaliningrad, Russia. Niinistö said they discussed Finland’s chairmanship of the Arctic Council, and the possibility of reducing emissions by eliminating coal powered facilities in the Arctic region.

During the Russian leader’s statements, Putin said “we will increase cooperation in the Arctic,” and praised Russia’s and Finland’s cooperation on environmental issues.

Putin said that Finnish and Russian firms would join forces in the wind energy industry, and spoke of common investments at the Hanhikivi nuclear power plant.