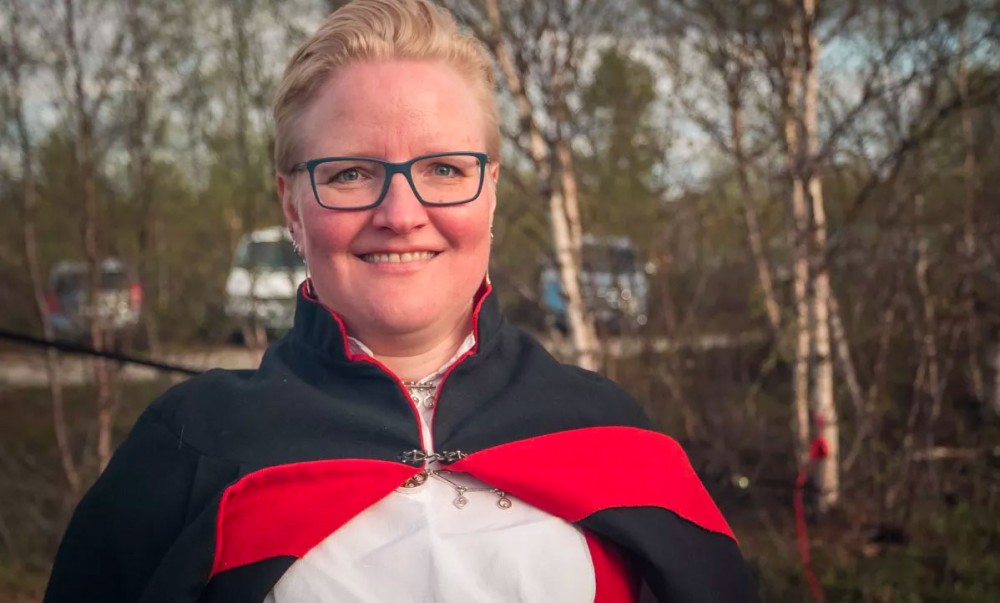 The Skolt Sámi living in Neiden, Norway, look forward to reviving their language and culture now that a new Skolt Sámi museum has been opened in their village. «The State of Norway must act before the traditional knowledge is lost: the population gets older and older all the time,» says a young Skolt Sámi.
Read in Russian | Читать по-русски
By

Here we are: two Skolt Sámi women, one from Norway and one from Finland.

We communicate in English, though we could use Skolt Sámi, a language that was spoken by the ancestors of us both.

Karine Mathisen has grown up in Neiden, a small village in the municipality of Sør-Varanger, through which the River Neidenelva runs into the Arctic Ocean. On the other side of the border, in Finland, the Skolt Sámi culture flourishes and you can hear the language spoken on an everyday basis again.

A moment before this interview, Karine Mathisen hosted the inauguration ceremony of the first Skolt Sámi museum in the world, telling hundreds of people that she is a Skolt Sámi.

«I belong to the Romanoff family, which has its roots here in the Skolt Sámi sijd of Neiden, or Njauddâm. My great grandmother who grew up here in Neiden was Skolt Sámi,» Karine tells about herself.

Mathisen describes how she has been exploring her Skolt Sámi roots a big part of her life. In her childhood, she never heard a word about being Skolt Sámi or about the language.

«My grandmother didn’t say anything about being Skolt Sámi. For her generation, it was not a good thing to be Skolt Sámi in Norway,» Mathisen says.

An invisible nation in Norway

Traditionally, the Skolt Sámi have lived in the north-eastern parts of Finland and Norway – in an area reaching from Petchenga to other parts of the coast of the Arctic Ocean – and in the western part of the Kola Peninsula in Russia.

The national borders have made it difficult for the Skolt Sámi of the three countries to have exchange and keep up their traditional seasonal migration pattern. The Sámi village, or sijd, of Neiden became part of the kingdom of Norway in teh 1800s, and World War II separated the Skolt Sámi into different areas.

Finally, the policy of Norwegianization distanced the Skolt Sámi of Neiden from their own culture and language.

When you step into the exhibition of the new Äʹvv Skolt Sámi Museum, the first thing you notice is the Skolt Sámi language.

The museum offers the visitor a trip into the annual migration pattern of the Skolt Sámi, as well as an opportunity to learn more about the history of this people. The texts of the museum are in Skolt Sámi, Norwegian, Russian, Finnish and English.

However, no-one knows exactly how many of the Skolt Sámi living in Norway still speak their native language. Skolt Sámi is not an official language in Norway. It doesn’t have the same kind of status in society as the other Sámi languages spoken in Norway: North Sámi, South Sámi and Lule Sámi.

Several generations have already grown up without the Skolt Sámi language, which is why it will be an enormous – but not impossible – task to revitalize the language in Neiden.

«Now is the latest time to take measures to revive the Skolt Sámi language and culture in Norway. The Norwegian Sámi Parliament should now give priority to the revitalization of Skolt Sámi both financially and politically so that the necessary measures can be launched,» Porsanger says.

«I, at least, am still optimistic and hope that other Skolt Sámi also feel that this museum can be a center for the Skolt Sámi language and culture. A place where we can revitalize the language together. Revitalization will take place as soon as the Skolt Sámi community wants it, and, here in Norway, you can certainly notice now how much the Skolt Sámi who have lost their language want it,» says Porsanger.

A state report on the Sámi language may benefit language revitalization

In addition to their language and culture, the Skolt Sámi of Neiden also lost their title to their lands and waters more than a hundred years ago – something that speeded up their Norwegianization.

As early as 1826, the sijd of Neiden was separated from the other Skolt Sámi villages. The other communities were left on the other side of the border, in Russia and Finland. At the time, the Skolt Sámi of Neiden didn’t even realise that they ended up living in another country.

In the past few years, the State of Norway has allocated resources for consolidating the position of the Sámi languages.

In 2015, the Government appointed a Sámi Language Committee to investigate the situation of these languages in Norway. The report – called Váibmogiella or “The Language of the Heart” – was completed in 2016, and it now provides the basis for promoting the Sámi languages and their position.

«We also hope to include Skolt Sámi in these languages that will be promoted, though it doesn’t have an official status,» says Anne Karin Olli from the Norwegian Ministry of Local Government and Modernisation.

«There is no-one in Norway who speaks this language. Now that the Váibmogiella Report has been submitted to the Government, we believe that it will also benefit the Skolt Sámi language. It contains many concrete measures that could also be used for improving the position of Skolt Sámi,» Olli says.

The number of Skolt Sámi living in Finland, Norway and Russia is estimated to be approximately a 1000. In Finland, there are about 600 and, in Russia, about 250 Skolt Sámi.

According to estimations, there are only about 150 Skolt Sámi living in Norway: they live in Neiden, in the province of Finnmark. It is difficult to get the exact number, because the countries have each their own criteria for ethnic groups.

To a great extent, the figures have also been influenced by how the dominant cultures have assimilated and put pressure on the Sámi. Few of the Skolt Sámi of Neiden know that they are Skolt Sámi.

Researcher Jelena Porsanger, who has studied Skolt Sámi history extensively, is also herself a Skolt Sámi, from Russia.

«We Skolt Sámi should now get a sense of belonging together; that we are one nation living in three countries. In each of the countries, we have, as a people, suffered in various ways. We’ve learned to manage in different ways. But now, we could work together for a common future,» Porsanger emphasizes.

According to Porsanger, the Skolt Sámi of Neiden have had, and still have, a weak self-esteem because of their Skolt Sámi identity. – When the traditional source of livelihood was lost, the language was not, either, passed down to the next generation, she says.

In June 2017, hundreds of people had come to celebrate in the area around the Skolt Sámi Museum in Neiden.

The planning of the Äʹvv Skolt Sámi Museum began at the turn of the millennium. Now, a colorful group of Skolt Sámi have gathered from Finland, Norway and Russia on the bank of the River Neidenelva. The sun shines through the birch forest as the river bank is filled with laughter and enthusiastic people.

Though Karine Mathisen and I don’t both speak Skolt Sámi, we eagerly discuss what we could do for our native language in future. Maybe something small at first: brief language sessions and handicraft courses in the lobby of the new museum.

Karine Mathisen is convinced that Skolt Sámi culture will rise again in Neiden, the westernmost Skolt Sámi sijd. However, the revitalization of the language and culture should start right away, because there is a risk that the traditional knowledge will disappear when the oldest Skolt Sámi die.

«I believe that it’s really important for us who belong to the younger generations to have this kind of museum in Neiden. Here we can learn about our culture and revitalize our language. It may turn out a difficult task, as there are not many Skolt Sámi descendants living in Norway anymore, Mathisen says,» worried.

Mathisen confirms that the Skolt Sámi of Neiden have a weak Skolt Sámi self-esteem.

«We are so few. We have to tell people more about the Skolt Sámi here in Norway. Not many people know that there are still Skolt Sámi living in the world. We must spread the word; that will be the first step. We have to start by telling children about Skolt Sámi culture, and we have to work on rebuilding our identity,» Mathisen says.

Äʹvv, the name of the Skolt Sámi Museum, is Skolt Sámi and means the glimmer of the sun – and that’s what the museum building also represents.  The museum in Neiden has lit the road, enabling the Skolt Sámi of the area to find back to their roots.

«Even during the building process of this museum, we’ve increasingly discussed the culture and the position of the Skolt Sámi in Norway. In my own family, too, we have recently talked about these things much more. I’m really happy about it,» Karine Mathisen says, smiling.