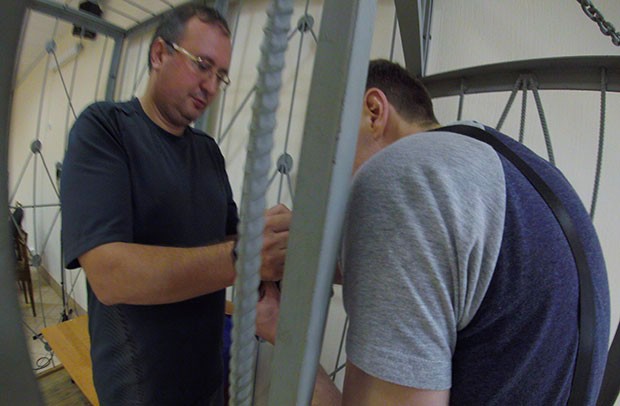 On Sunday, July 30th, the judge on duty at the Oktyabrsky district court examined a petition offered by investigators concerning what kind of restraint should be used with Eduard Nikrashevsky, the current deputy Chief of staff of the Murmansk regional government.

The meeting was connected with the expiration of Nikashevsky’s 48-hour preliminary detention term. He was originally detained while exiting an airplane arriving in Murmansk from Kaliningrad on Friday night. The court granted the motion and ordered Nikrashevsky to be sent to pre-trial detention (SIZO) for two months.

From the meeting, it became clear that Mr. Nikrashevsky is being charged with fraud and embezzling money in an organized group.

Another, but not the last, participant of the proposed group, is Georgy Blagodelsky, deputy head of the Department Supporting the Activities of the Murmansk Region Government, who was also sent to the detention center yesterday for two months. Mr. Blagodelsky, who had been in charge of ordering daily necessities for the regional government, seems to have been overcharging by hundreds of thousands of rubles for common purchased items.

From the fragments of the documents that were read in the court, it follows that Mr. Blagodelsky has already testified before a number of regional administration officials and Mr. Nikrashevsky in particular and also reported on threats he has received.

At the meeting, Nikrashevsky denied the charges against him and asked the court to choose a preventative measure not connected with being sent to SIZO, telling the court that he would not hide. He said that he had been aware via the media of Blodadelsky’s case and that if he had wanted to hide, he would have done it already.

Nikrashevsky’s lawyer, Mr. Vasiliy Yastremsky, formerly a lieutenant-colonel and the head of the International Department of the Murmansk region Federal Migration Service for the city of Kola, asked the court to allow his client’s detention to be served in the IVS, a temporary and less sever detention center so that he might have the opportunity to gather and deliver certain medical documents.

Nikrashevsky told the court that the crimes he is accused of committing could not have been committed because of his lack of managerial functions and that he didn’t have any employees under his control. The judge asked how it was possible to be a deputy chief and not have any subordinates at all?

In a literal quote, Nikrashevsky explained that “Everyone submits everything directly to the chief of staff and his deputies supervise everything. All subordinate employees are given recommendations on what to do and how to do it.”

And if one looks into the Control and Accounts Chamber reports checking into a similar subdivision of the regional government, you can find out that this situation in the administration is quite normal: there are actually deputy chiefs with zero functionality and generally without any official duties. There is a job title and funds allocated, but there are no job duties.

The court ruled in favor of the investigation’s petition and sent the Murmansk regional government’s deputy chief of staff to the SIZO detention center for two months.