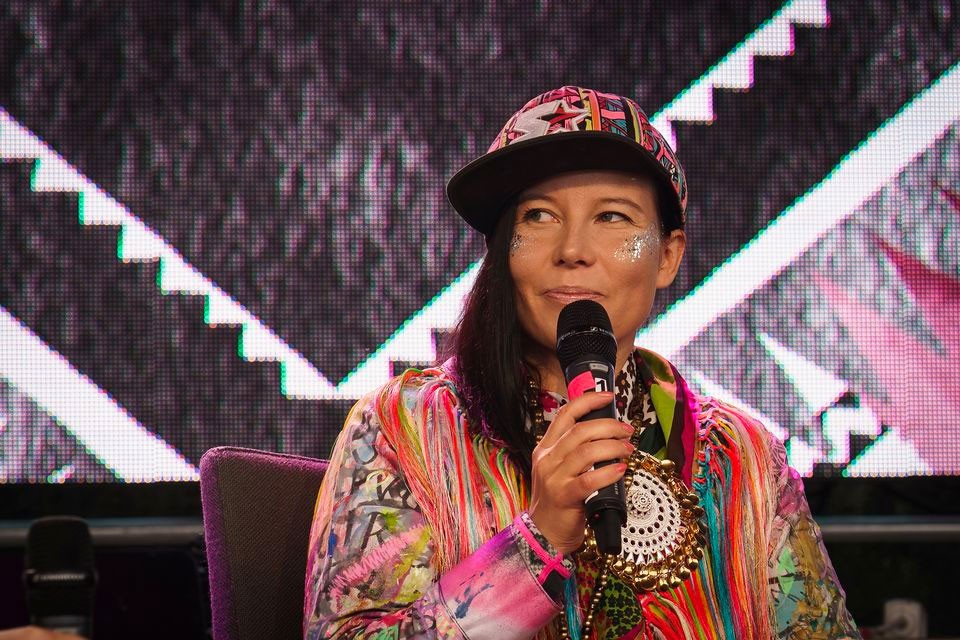 During the debate forum Yle Sápmi Arena, leading Sámi representatives Jenni Laiti, Tiina Sanila-Aikio and Aslak Pieski discussed what it feels like to be Sámi in Finland today. The discussion ranged from desparate frustration to new enthusiasm.
Read in Russian | Читать по-русски
By

The first theme addressed by this year’s Yle Sápmi Arena was “Politics and barricades: The possibility of influence in the 100-year-old Finland”.

The discussion took place on the main stage of the Ijahis Idja indigenous music festival and was chaired by Maria Saijets, the Head of Yle Sápmi. The participants were Jenni Laiti, an artist and activist, Tiina Sanila-Aikio, the Chair of the Finnish Sámi Parliament, and Aslak Pieski, an enthusiast who works for the community.

The discussion ranged from frustration to new enthusiasm.

Sanila-Aikio is tired of the present situation: no matter what you do, the situation does not improve – not even in a civilized state.

“I feel frustrated because of this almost every day. We are inhabitants of a civilized state, we live in one of the richest countries in the world, we provide education for people, information is available for us, and we can find it, and analyze and understand it.”

“But at the same time, if we try to tell about our view of the Sámi, we don’t get the message through. Even if the Sámi Parliament, Sámi, activists and I have tried to tell about our situation and rights in every possible way, using all the words and means we can, the information does not go through.”

“Those people think that they know everything and understand the real situation, and it makes me extremely frustrated.”

Aslak Pieski, who works for the community in Utsjoki, has experienced the same.

“We Sámi are like people who live at the bottom of an outhouse: different sorts of people come to listen to us – and then they piss and shit on us. They listen to us, but don’t take anything into account.”

“If Sámi really want to make an impact, they are branded as terrorists; they are not good people. But I’m really happy that the young people can and dare and are doing things,” Pieski says.

The Chair of the Sámi Parliament does not know what to do about the issue.

“I don’t know how to get the message through. I’ve tried, together with the Sámi Parliament – its politicians and administration – to look for ways that comply with our judicial system. This is our situation in 2017, in the 100-year-old Finland,” Sanila-Aikio reflects.

Working at “lichen level” is important

The Sámi Ellos Deatnu (Long Live Deatnu) movement that protests against the new Deatnu Fisheries Agreement has got a great deal of attention this summer. The movement took the self-determination of the Sámi in its own hands, as the State did not listen to the local people.

Self-determination is really the crucial thing, says Jenni Laiti, a representative of the movement.

“Self-determination is the most important thing: that we may and can make decisions on our own. And the only way for us to determine is by making decisions.”

“It all began when we reflected on how to launch self-determination in the river valley. We wanted to show that we could do it, and implementing a moratorium in the river was one way of doing it. We don’t need to wait for the states to draw up an agreement for us that we can accept.”

Laiti is satisfied with the results of the moratorium area.

“I’m really happy about the achievements of this summer and the fact that we have reached the local people. As a result of colonialism, our people – we ourselves – have become the biggest hinder for self-determination,” Laiti reflects.

Tiina Sanila-Aikio is grateful for the Sámi who are investing a great deal of time into promoting common causes.

“In the past year, I’ve witnessed a movement spring up among our people that I think highly of – a movement that helps the Sámi Parliament in its work. It’s extremely important that we have people who work at lichen level, knowing that their work is needed. It also shows that we have crossed a certain line and moved on to a new era.”

Sanila-Aikio is the only employed full-time politician in Finnish Sápmi. She says that there would be need for more people.

“We should have more people who could really use all their strength and time for advocating our causes, not just do it after working a whole day at another job, for example.”

There are many ways of making an impact, but Tiina Sanila-Aikio feels that the social media are one of the greatest means today.

“I think that Sámi are using the Internet and its possibilities extremely well. One blogs, another one vlogs, yet another one draws Instagram comic strips, and so on. Without the social media our issues would not have gained so much visibility, and we would never have been able to spread our views so widely through a newspaper, for example.”

“I don’t think that we’d be in the present situation without the social media. Therefore, it’s vital that we adopt new methods of influence as quickly as possible,” Tiina Sanila-Aikio stresses.

Aslak Pieski from Utsjoki has spotlighted issues through his online blog.

“I started writing a blog when I noticed that experts came to the River Deatnu and started giving advice to people on how to fish. We in the Sámi community need all kinds of people who work for the same goal but in somewhat different ways,” Pieski reflects.

The beginning of a new era?

Though the Sámi are not in an optimal situation in terms of their legal rights in the 100-year-old Finland, the Chair of the Sámi Parliament is optimistic.

She believes that good examples encourage other people, too.

“I believe that Ellos Deatnu has begun an era that we don’t even understand yet. I believe that the movement has opened the way for us. If a method that works has now been applied in Utsjoki, maybe people will also start to use it in other areas.”

“I believe that our community, people and nation will show us which way to go.”

“We have built up this movement with love, on a path of love, and it radiates and has already radiated much farther than the river valley of Deatnu.”