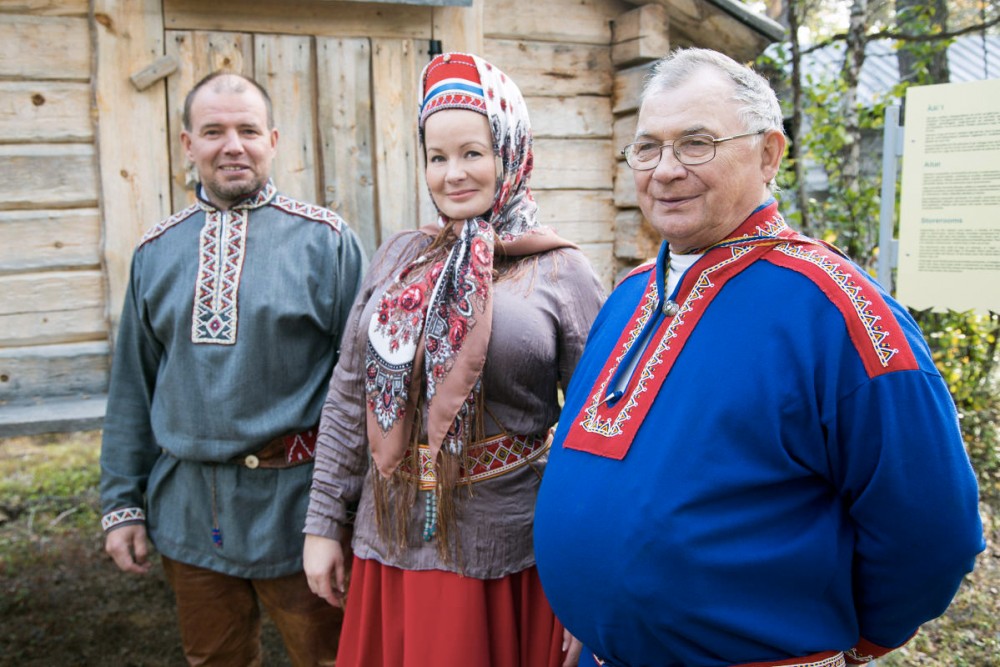 Leading Sámi advocates Veikko Feodoroff, Tanja Sanila and Sergei Kp. Fofonoff were all hoping that the Skolt Sámi in Finland could choose between several candidates in the election of a new official representative for the nation.
By

The Skolt Sámi Representative is chosen through elections for a three-year term at a time to attend to the common matters and interests of the Skolt Sámi.

The tasks of the Representative are:

In his comment to the national broadcasting company YLE, Veikko Feodoroff said that he understands the decision of the committee as concerns these elections.

“I feel that the committee has acted correctly. According to the regulations, to be eligible as a candidate, you must prove that you know the Skolt Sámi language, so if a candidate-to-be chooses not to prove his or her skill, he or she can’t run for the office. For me this is perfectly clear,” Feodoroff says.

Fofonoff: “I could not make it to the assessment meeting”

At its meeting on 1 September 2017, the Election Committee chose an assessment group that was given the task of assessing, through discussion, the Skolt Sámi language skills of each candidate that wanted to run for the office of Skolt Sámi Representative.

All the members of the assessment group were people with a good knowledge of Skolt Sámi; none of them belonged to the Election Committee. According to the news release of the Election Committee, all the candidates were given the opportunity of participating in a language skill assessment meeting either in Sevettijärvi or from distance, through Skype.

Of the candidates, Sergei Kp. Fofonoff and Tanja Sanila tell that they did not participate in the assessment at all.

“I was attending a meeting in Levi and Rovaniemi, so I didn’t have time to go to an assessment meeting,” Sergei Kp. Fofonoff told YLE Sápmi a day after the Election Committee chose Feodoroff the Representative.

Fofonoff also told that he plans to appeal against the decision.

“This is an illegal decision,” Fofonoff said.

All the three candidates – Feodoroff, Fofonoff and Sanila – have held the position of Skolt Sámi Representative.

Sanila: “The Skolt Sámi Act does not state how you should prove your knowledge of Skolt Sámi”

The present Skolt Sámi Representative Tanja Sanila writes on her public Facebook page that she considers the assessment group appointed by the Election Committee illegal.

“As the law does not define how the knowledge of Skolt Sámi should be proved, it’s clear that the Election Committee can’t set criteria for language skills by using its own experts. This procedure is more restrictive than the Skolt Sámi Act provides, and thus downright illegal,” Sanila writes on Facebook.

In her Facebook post, Sanila refers to the complaints made on the 2014 election: as concerns that election, the Supreme Administrative Court saw her as eligible for the office of Skolt Sámi Representative.

Only one candidate had his language skills assessed

Veikko Feodoroff was the only candidate who had his knowledge of Skolt Sámi assessed. He feels that a candidate-to-be should let the assessment group assess his or her Skolt Sámi skills.

Feodoroff tells that the language test was a short, 15-minute-long conversation during which very ordinary things were discussed in Skolt Sámi.

“If you can speak Skolt Sámi and are eligible in other respects, you can go and show it to the assessment group appointed by the Election Committee,” Feodoroff says.

“I don’t think it’s a problem. The Skolt Sámi Village Meeting has ordered that we Skolt Sámi shall see for ourselves whom we consider to know the language to the extent the Representative should know it; that the issue shall not be decided by some non-Sámi administrative body that only consists of Finnish members,” Feodoroff adds.

“I had hoped that all the three candidates would’ve taken the language test and we would have gone to polls. Election campaigns are a way of spotlighting things and making people more active.”

Hoped for an election

The original plan was to hold the election of the Skolt Sámi Representative at the beginning of October this year.

Feodoroff feels that it would have been important to give the Skolt Sámi the possibility of choosing their official representative through elections.

The meetings are chaired by the Skolt Sámi Representative.

The meetings are held in the Skolt Sámi Area, in Sevettijärvi and Nellim.

The Village Meetings deal with the following matters:

“I had hoped that all the three candidates would’ve taken the language test so that we would’ve gone to polls. After all, election campaigns are a way of spotlighting things and raising interest and engaging people in matters concerning the Skolt Sámi. Elections spotlight the importance of the Skolt Sámi Village Meeting and Representative, Veikko Feodoroff says.

A decision of the Election Committee can be appealed

Pursuant to the Skolt Sámi Act, a decision made by the Election Committee can be appealed. This can be done by submitting a written complaint to the Administrative Court of Northern Finland within 30 days of publication of the results.

Veikko Feodoroff, who has now been elected the Skolt Sámi Representative, was one of them who appealed the results of the 2014 elections. He understands that people want to submit complaints about the proceedings of the Election Committee.

“It’s good that people can appeal if they think that there has been something wrong with the procedure; that things can be corrected. This time the Election Committee wanted to examine itself more closely which ones of the candidates fulfilled the requirements of eligibility and could run for the office. Some people don’t like the fact that this was done; they feel that it was wrong, Feodoroff says.

Sergei Kp. Fofonoff has confirmed to YLE Sápmi that he will appeal the decision of the Election Committee.

Translation to English by Kaija Antonen