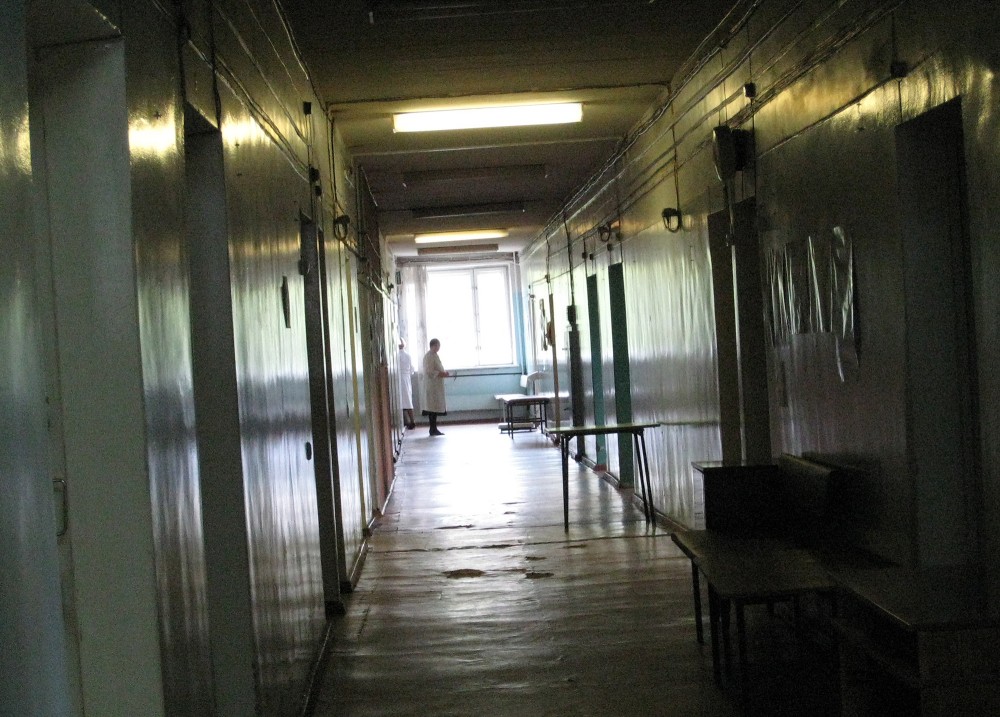 In regional healthcare, everything will be reduced except the Ministry of Health
By

Next year,  the regional Sports Medicine Therapeutic Center of will merge with the Skin and Venereal Diseases Clinic.

To put it bluntly, the reformist itch of the regional Ministry of Health has not been dissuaded by the dubious results of the recent incorporation of the AIDS Center with the Venereal Diseases Clinic. And the question begs to be asked: what aspect of medical innovation might be optimized by this merger? The government as usual claims that such conditions are a result of an “acute budget deficit”. But perhaps an unwanted case of  gonorrhea might be cured with the help of some therapeutic gymnastics or perhaps lifting some weights might control a bout of syphilis.

This next “experiment” is being carried out because of the spending moratorium placed on the same treatment network optimization plan which the parliament timidly put in place at  the last meeting of last season. However, how fat the current legislature actually is can be judged by how much it has ignored the parliament’s demand to provide a “scientific” development strategy for health care.  Such a strategy was in fact supposed to be how this optimization plan was to be carried out. More precisely, it was supposed to be conducted under the guidance of the federal Ministry of Health.

In late June, the deputies demanded that Kovtun present a strategy and justification for this optimization. The deadline was on September 15.

On August 23 however,  Kovtun replied that she would send the strategy to the Duma by October 9, almost 3 weeks after the required deadline. On Friday, the calendar already showed October 20 and still no concept in paper form had appeared on the desks of any deputies. But then Minister Peretrukhin, armed with a Power Point presentation no less, appeared to clarify the situation.

What do the orders of the Russian Federation Ministry of Health require?

Now we will go slowly and spell it out for you word for word. The order of the Ministry of Health prescribed on June 8, 2016, that before any optimization of the medical institution network can take place, not only their activities but also the demographic situation, the state of the road network and climate parameters for each individual cell in the network had to be analyzed over 3-5 years.

Making any scientific forecast should, as you understand, be only the responsibility of people burdened with intelligence scientific degrees. The Ministry of Health last year counted on getting 14 million rubles (€207,000) to develop the concept. But somehow, this money did not appear so this year vice-governor Pogrebnyak decided to compose the strategy on his own.

What is the forecast for the Murmansk region?

On the way in, we got MS presentation with graphs and photos illustrating the changes for the better that had occurred in medical institutions in recent years.

“For example”, as Peretrukhin explained in one of the slides, “Previously, how did people get their tickets to see a doctor? They had to stand in line to get their appointment ticket at 5 am! And 200-300 people would be waiting! And now? They have gotten used to much quicker service.”

How good is the situation that everyone has gotten used to?  Well, it is possible to make that judgement according to reports in the VKontact “Medicine in Murmansk page” page. Here one person asked the question about how to get the attention of a dentist. Apparently, when he tried to use the policlinic, all the doctors were gone. But after calling to find out the situation at two other locations, he found there was a week’s wait for an appointment.

A second complaint came from a woman trying to get some orthodontic work done for her daughter. Calling at the beginning of September, the registrar told her to call on the first Saturday of the month before 10am. She started calling at 9:58 using her home phone, her husband’s mobile and an auto-call app, by 20 minutes to 11, she had never managed to get through as the line was always busy.

So, instead of scientific research, on the basis of which a health policy might actually be built in the coming years, deputies were shown a piece of work typical of the school homework genre. Except that they ate it. When Antropov and Makarevich asked whether at least a written version of the presentation existed, the Minister vaguely answered that he would get right on it. However in the meantime, we all got to find out what else the creative ministers plan to shorten.

So, combining the Murmansk Diagnostic Center with the regional hospital officially took place on 1 October. I will not comment again on this scandalous decision, I will only remind you that the Duma’s attempts to prevent  this were also ignored.

Also, but without as much of a fuss, the decision to combine the Severmorsk “ambulance” service with the Murmansk service has already taken effect. And in turn, so will the services for Kola, Pechenga, Lovozero and Olenegorsk. This is the truth and the process will stretch out over 3 years.

In 2018, physiotherapy will be also combined with, as already mentioned, venereology, and all of the children’s polyclinics in Murmansk will be merged. And the children’s dental offices will be attached to regional dentistry, as well as all the “adult” dental offices in the polyclinics of Murmansk and Severomorsk. And also suddenly, the Olenegorsk dental polyclinic. In Kirovsk, the central hospital’s dentistry will be transferred to the Apatite-Kirov dental clinic.

In the plans for 2018-2020, “duplicate departments in state regional health care institutions for clinical care, emergency and budgetary concerns  for ophthalmology, otorhinolaryngology, gastroenterology, pulmonology, endocrinology, cardiology and neurology are to be merged. The exception is that we no longer hear the mantra about “reducing the administrative link”. These are real beds and there are real queues for hospitalization. And no one should complain later that the patients are lying in the corridors.

And apparently the question about the Kola infectious disease problem has also been solved. Instead of what it has, the Ministry of Health plans to open a center for palliative care which is necessary for the region, there is no dispute about this, as well as an outreach service for palliative care, which is also in the plans.

I cannot say that all of the Ministry of Health’s announced plans are only horror stories. The plan also calls for the construction of six rural primary care facilities for obstetrics and 3 dispensaries as well as repairs to several polyclinics and maternity hospitals.

But these are different problems. The concept of health development which was expected from Peretrukhin was supposed to be  like a diagnosis and a treatment plan. But what the Duma saw was “let’s cut it and then we’ll see.”

For example, the solution to the 25% decline of the Murmansk region’s population over the last 15 years, insufficient material or technical resources and the level of pay available for medical personal will now be solved by concentrating and combining technical, financial and administrative resources into a single organization.

Transport accessibility, infrastructure, the effectiveness of the institutions, the structure of morbidity and the population forecast  were not, as prescribed, taken into account and nothing was named. And most importantly, the idea of the reforms was not to make medical care more effective. The point was only that there is no money.

However, there is no money and that has also been presented to the Duma. According to the minister, to implement everything that has been planned, it would be necessary for the budget to allocate 3.5 billion rubles (about €52 million) to re-equip medical institutions. But they will only give 180 million (€2.7 million).

And of course, the equipment that the national project “Health” received earlier has already developed its own symptoms.

“At the regional hospital, the only angiograph we have is broken. Now we cannot even render assistance for a heart attack,” - the minister said, spreading his hands.

In general, this means that despite the shocking news, you should not grasp at your heart here. I wish you good health and a good mood.