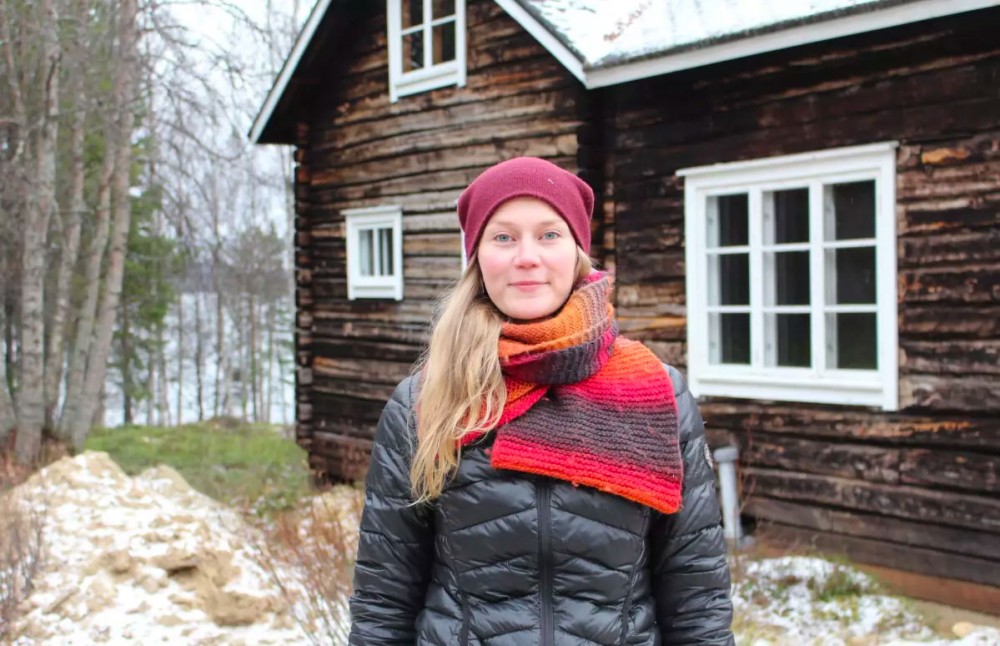 A few years ago, Auri Ahola left the Finnish National Ballet, moved away from Helsinki and settled in the northern Finnish town of Inari to study the local Sámi language.
Read in Russian | Читать по-русски
By

The Inari Sámi professional ballerina Auri Ahola decided a few years ago to quit her work at the National Ballet in Helsinki and move to Inari in order to learn Inari Sámi. Though Ahola enjoyed living in the city, she never felt at home in an urban setting.

“I liked my work at the National Ballet and I had the best colleagues in the world. The spirit in the house was good. After leaving the Ballet, I began working with modern dance, and really enjoyed it too. It was fine,” Auri Ahola says.

When living in the metropolitan area, deep down Ahola wanted to return to her native region.

“I’ve always felt that, one day, I will move to Inari. But as my job was in Helsinki, I thought it wouldn’t happen until I was retired. But then, one day, I felt that it was time to move.”

Moving to Sápmi was a big change in many ways. The environment was totally different, and friends and part of the family stayed in the south. But not everything changed.

“One thing remains: I still dance. I haven’t changed my occupation. In other respects, my everyday life is very different. I have to repair some sort of motor device every day,” Auri Ahola laughs.

Living on an island is a challenge: “This is not very romantic”

It is difficult to find a house to rent in the village of Inari, but Ahola and her spouse managed to find one nearby, on an island on Lake Muddus. However, the place is not any old place.

“I saw that they were selling this, and I just wanted to move here. This is where my father, grandfather and greatgrandfather and -mother used to live. Of course I wanted here.”

You can only reach the island by boat or across the ice in winter.

“At first, I thought that this would be a summer place; that we wouldn’t live here throughout the year. But the more time we have spent here, the more it feels like home. I want to live here permanently; it’s fine for me that my home is on an island and life is sometimes a bit of a challenge,” Ahola laughs.

The couple dos not have electricity, and they have to fetch the water from a well. However, they are planning to wire the place up.

“You can’t be lazy here, as there are so many things to do. Some people may think that life on an island is romantic; that it means burning candles and reading. But that’s not the case. We have to work all the time: get water from the well and heat the house. There are always things to do, but I like it.”

The couple does not have a lonely life on the island, as they are accompanied by a swarm of animals: a dog, a cat, sheep and a ram. Though it takes time to look after the animals, the couple enjoy it.

“Animals are nice, and sheep, of course, provide us with meat and wool,” Auri Ahola says.

The beginning of the winter – the time when ice does not yet carry a person – Ahola spends in an artist residency in Italy, while her husband stays on the island, taking care of the house and the animals. If their schedules allow, they will both stay on the island in spring, when the ice starts melting.

One can also live on dancing in Sápmi

Auri Ahola has been able to continue as a professional dancer in the Land of the Sámi too. She has been working on her own dance performances and held dance lessons for children.

“I’ve also made a film which combines dancing with sign language. It will soon have its premiere. We will also have a tour here, with me working as the artistic director of the tour. I’ve also been teaching dancing in the Inari Sámi language and participated in reindeer herding. In addition, I have substituted as a teacher at the school here, so I have plenty of work to do,” Ahole explains.

Searching for a Sámi way of dancing

At the end of October, Auri Ahola received a scholarship from the Finnish cultural foundation Majaoja-säätiö. With the help of the grant, Ahola intends to look at what Sámi dancing could be like.

“The Sámi do not have a distinct dance of their own. I’m going to go through archives and interview professors and cultural researchers on what a Sámi way of dancing might have looked like. I will look for pictures in the archives and, of course, try to figure out what it could be. On the basis of all this, I will do a choreography. This is a long project that will last for at least two years,” Ahola says.

A challenge to work in the cultural field in the north

Auri Ahola has been working in the cultural field with Inari as her base for two years now. She has noticed that it is more difficult to engage oneself in the sphere of dance in the north than in the south.

“There are not so many artists here, especially not in the field of dance. It was so easy in Helsinki: I could always just call someone, and they would participate in my project. Here in the north, I really have to look for those who have skill in dancing.”

Ahola is certainly not discouraged: she sees the situation as a possibility.

“For example, I’m right now working with the kind of people that I would not have been working with in Helsinki.”

Furthermore, Inari does not provide the same kind of conditions for dancing.

“The resources and facilities are limited here. In Helsinki, there’s a lot of resources for dancing, while here you have to do everything yourself. You have to find the suitable gyms yourself, as there are no dance studios here.”

However, Sámi culture is a resource that can bring new elements to your art.

“Our Festival” arrives in Sápmi

Last summer, Auri Ahola was engaged in an event called Our Festival. Now the same festival sets out on a tour all around Finland. It will arrive in Sápmi in December, with Ahola working as the artistic director of the tour in Northern Finland.

“In the tour, I’ve engaged performers that have made an impression on me and showed courage and who are broad-minded,” Auri Ahola says.

The performers participating in the tour in Northern Finland include famous Sámi artists such as yoiker Ingá-Máret Gaup-Juuso and rapper Ailu Valle. On the stage, there will also be Kevin Francett, a beatboxer from Inari, breakdancer Jimi Kettunen and, of course, Auri Ahola herself.

Hilja Grönfors, a Rome from Finland, who has collected Rome songs and sings in the Rome language, will also join the tour.

“If you’ve never heard anyone singing Rome songs, it’s definitely something you should see. Grönfors is an incredible singer and performer. She is a brave, strong Rome woman with a gorgeous voice,” Ahola praises.

The Our Festival tour “Breaking the Silence” starts in Inari on 13 December. There will also be a home concert in an ordinary house in Inari, on Lake Muddus, on 14 December. After that, there will be a performance in Sevettijärvi on Friday, 15 December, and in Utsjoki on Saturday, 16 December. The tour will end with a church concert in the Utsjoki Church on Sunday, 17 December.