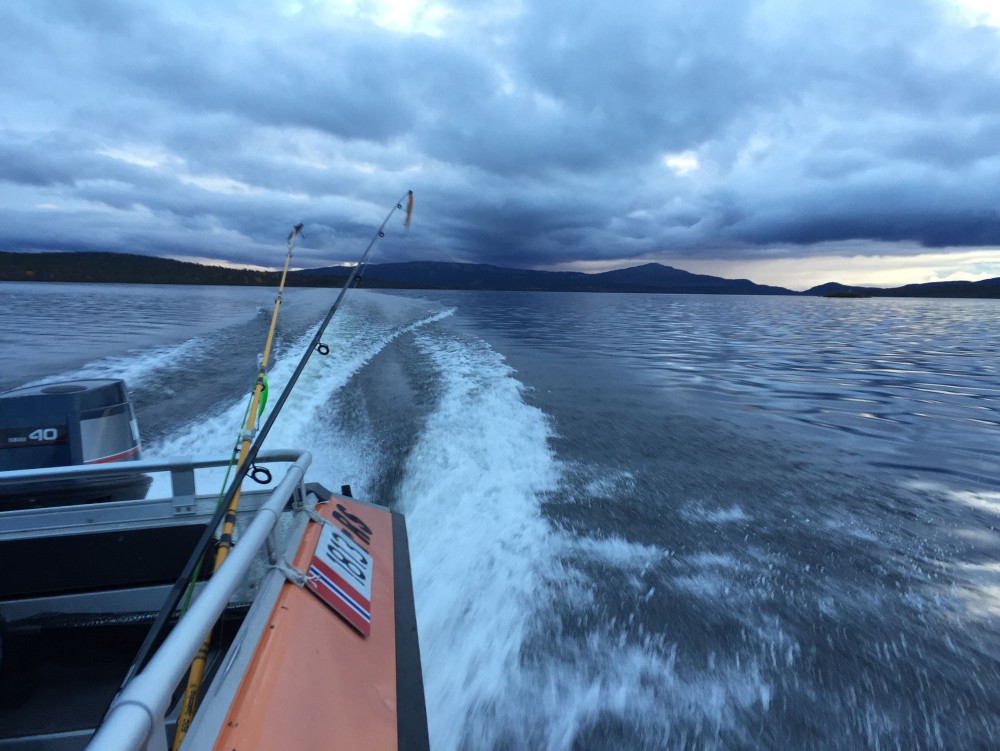 According to Veikko Kiviniemi, a professional fisherman, Lake Inari in the northernmost Finland is a good lake to fish in, as there are not so many fishing restrictions in these state-owned waters.
Read in Russian | Читать по-русски
By

Repair work is being done at the Veskoniemi Harbor close to the place where the River Ivalo empties itself into Lake Inari. Until now, those engaged in leisure boating and professional fishing have competed for the same berth places. Now professional fishermen will get their own harbor.

Veikko Kiviniemi is happy about this. He has been fishing professionally for thirteen years on Lake Inari. He considers Lake Inari a good place to fish in, as there is seldom quarreling about the fishing waters.

”There are not so many fishing regulations on Lake Inari, and the share of private waters is small. Therefore, we don’t have fights over property rights. So in this respect it’s good that most of the lake is state-owned. In terms of restrictions, fishing is quite free here,” Kiviniemi praises.

Fish traps, gillnets and whitefish enough to provide a living

“Catches are bigger in summer when we use fish traps, or fyke nets. The catches caught with gillnets are smaller, but you can also earn a living using them if you fish all year,” Kiviniemi tells. He himself fishes mostly for whitefish, because it is the best source of income in the area.

“I’m mostly interested in catching whitefish, with fish traps and gillnets. Here, whitefish is, after all, the best fish in terms of money.”

The whitefish catches of professional fishermen go almost completely further south, to Oulu, to be further processed there. In winter, the catches caught from under the ice are smaller and there is time to fillet fish for the local stores too.

Difficult for the local stores to get local fish

When ordinary people go to the store in Inari or Ivalo, they can mostly just buy farmed salmon from Norway. The fish of Lake Inari do not reach the inhabitants of the area. Kiviniemi explains that the volumes of fish from Lake Inari that the local stores want to buy are too small. Therefore, it is difficult to sell to them.

“It’s the unsolved problem. Local people and those running the stores say that they cannot get local fish, but it’s more of a question of volumes and prices. The local stores will only sell small volumes, so the yield is usually quite small for the fishermen.”

The stores usually belong to a bigger chain of stores, and it is the chain which decides what the stores will provide for their customers. If the chain does not buy fish from Lake Inari, the individual stores will not get it. Nonetheless, Kiviniemi says he has not had any problems selling fish to the local stores.

“It hasn’t been difficult. We try to cut the fish we sell to the local stores into fillets. But we really don’t have time to sell to them in the summer, because we are so busy delivering bigger volumes. In winter when catches are smaller we can, to some extent, sell to local buyers.”

The fishermen of the area make joint deals with the buyers. Such contracts mean increased volumes and less expenses. In summer, almost all the professional fishermen using the harbor and the fish processing facilities in Veskoniemi sell their fish to Oulu to be further processed.

“Partly, the fish go to different parts of Finland, and, partly, they are filleted and brought back to the region of Inari, to the restaurants of the tourist centre Saariselkä.”

The present climate and snow conditions a challenge

Kiviniemi has recently hauled his boat ashore for the winter. It now stands in the Veskoniemi Harbor, waiting for the spring. The next fishing trip will be made by driving a snowmobile to the eastern reaches of Lake Inari. It is time to start catching fish from under the ice. However, the ice conditions make Kiviniemi worry.

“I’m, of course, concerned about the fact that winter no longer sets in as it used to. The snow that falls before the ground is properly frozen also means that the lake will not freeze up properly. The ice doesn’t get as thick as it should, so we get two layers of ice with water in between. The ice conditions don’t seem so good this winter either.”

The number of professional fishermen is going up

The fisheries harbor in Veskoniemi is used by approximately fifteen fishermen in summer and five in winter. According to Kiviniemi, at some point it seemed that there would soon be no professional fishermen left in the area.

“But now new men are entering the business. We’ll see how they will manage. We would like to have many new fishermen here.”

Kiviniemi himself started fishing in 2004. Before that he was employed in other fields for years, for example, in electrical work for the last ten years. He used to fish in those days too, but during his leisure time.

“There were a lot of lay-offs in those other jobs, for example when I was an electrical worker. I was often laid off, so I got frustrated because I really wanted to work all year. It didn’t seem possible in the field.”

Kiviniemi has not missed electrical work. He is happy with the present situation, though many people have considered fishing just a pastime.

“That’s what people always say. We always hear that we are just puttering around. But the field demands much more today. You have to be able to plan and figure out things in advance. Fishing is no longer just relaxation and a nice hobby. It’s definitely a normal business activity.”

Fishing as an occupation

The people who want to fish on a professional basis need to know what they are doing. Kiviniemi has some advice to give to young people in particular.

“You, of course, need to be independent and determined if you want to make a living in the field. You will not get much help from other people.”

Kiviniemi encourages young people who are interested in professional fishing to work in other fields first.

“Any kind of work experience will be of use. You need quite a lot of money to start in this business. You should have something to rely on, if you wish to manage. It’s not a good solution to enter the field on borrowed money.”

According to Kiviniemi, it might be wise for young people to work for a while with an experienced fisherman so that they can learn about the methods in practice. This would give them knowledge of the kind of tools they will need and whether they can afford them, or whether they would still need to wait for some time. Kiviniemi himself has never regretted his decision to become a professional fisherman.

“Actually, I’ve always thought that I should have started fishing a few years earlier than I did.”

Translation from Sami by Kaija Anttonen