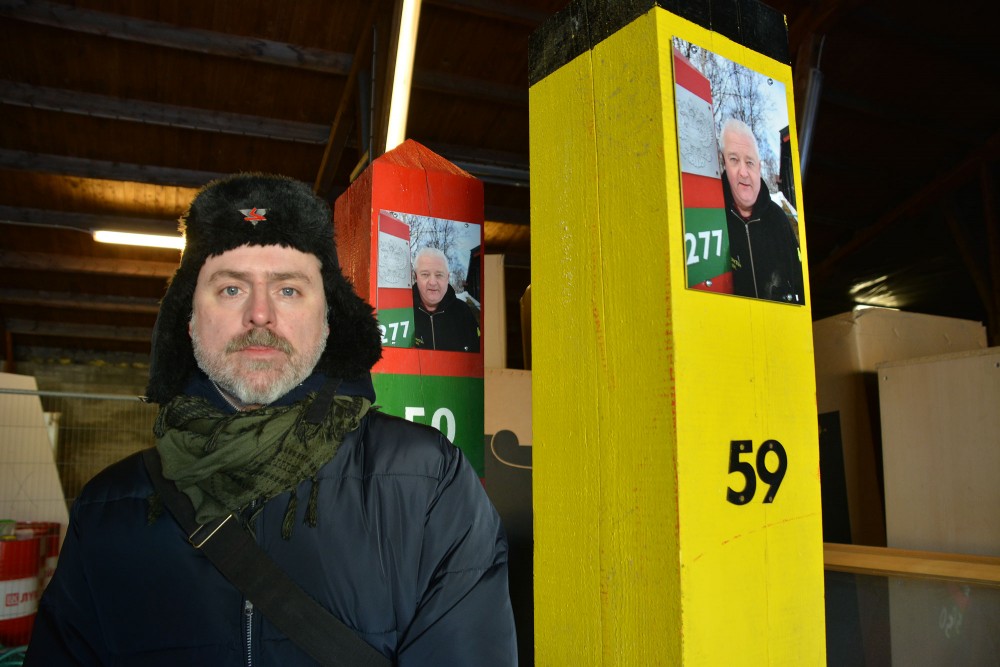 Morten Traavik is ready to take his exhibition "Frode's Border" to the streets of Kirkenes. Photo: Atle Staalesen

In a tribute to the former Norwegian border inspector who is locked up in a high-security Moscow prison on charges of espionage, artist Morten Traavik sets up dozens of Norwegian and Russian border poles in Berg’s home town Kirkenes.
Read in Russian | Читать по-русски
By

«It’s a greeting to Frode,» says Traavik. This week he installs 21 pairs of border poles in downtown Kirkenes, the Norwegian town located only few kilometres from Russia. The stunt is part of the Barents Spektakel art festival.

«This is one of the few things we can do to keep up a high focus on his case», Traavik says to the Barents Observer.

Frode Berg was arrested in Moscow on 5th December and has since been behind bars in the Lefortovo prison in Moscow. He is charged by the FSB for espionage, but locals in Kirkenes appear confident that he is innocent and that someone has set him up.

The display of the border poles was first made in 2011. Back then, Traavik closely cooperated with Berg, who at the time was working as inspector at the Norwegian Border Commissioner. Berg enthusiastically contributed to the show. He was a state official with extensive knowledge about the nearby border, but also had a great personal devotion for cross-border cooperation.

The border poles, which had been removed from the 196 km long Norwegian-Russian border as part of a technical overhaul, got a new life as part of Traavik’s exhibition «Borderlines». The installation was on display in several cities in 2011 when relations between Norway and Russian were prospering. Just a year earlier, the two countries had signed a historical agreement on the delimitation of the Barents Sea. People were crossing the Norwegian-Russian border like never before. There was a good mood in the borderland.

Then, things changed. Political relations between the two neighbouring countries are today frosty and Frode Berg is in prison in downtown Moscow. In Kirkenes, the border town which has built its post-Cold War identity on smooth cross-border people-to-people cooperation, there is growing unease about relations with the Russian neighbour.

«For me, as artist, activist and fellow human, it is important to do this exhibition», Morten Traavik says. He underlines that the border poles on display should be seen also as a kind of warning finger aimed at Norwegian authorities and urging for more action to get Berg released.

On Wednesday night, the exhibition opens in the streets of Kirkenes. It carries the name «Frode’s Border». On each of the border poles are pictures of Berg and a description of his case. It is expected to be one of the highlights of this year’s Barents Spektakel, the festival which has taken place in Kirkenes annually since 2003.

According to Morten Traavik, the Barents Spektakel is unique.

«Without comparison, it is one of the most interesting arts and society events in Europe, not only because of the artistic contents and the program, but also because of its location», he says.

«Here, political shadows are cast in both directions, and we clearly see not only peace and love and cross-border cooperation».

Frode Berg has himself been an active participant in the Barents Spektakel festival for several years, and especially after his retirement from the Border Commissioner in 2014. He has been helping out with a wide range of practical issues and is also board member of Pikene, the curator group that organises the festival.

«Frode is our local expert who would meet with artists and tell them about the border and take them to the borderline,» says Lyuba Kuzovnikova, leader of Pikene.

«And since he is a former officer, he has very good organisational skills. He was responsible for transportation and logistics and that was what he was supposed to do also this year», she says.

For the festival organisers, the revival of Morten Traavik’s Borderlines project is a way to show tribute.

«It is important for us to keep Frode’s story on the surface, that it is visible,» Kuzovnikova says.

And Berg will indeed be visible and present in downtown Kirkenes this week. The outdoor exhibition will open on Wednesday night and be on display all through the weekend.

The arrest and spy-accusations against Frode Berg has shaken the small border town.

According to Kuzovnikova, the case has made locals in Kirkenes worried, but not scared. And relations with nearby Russia will continue.

«Cross-border cooperation is continuing, it will not stop,» she underlines.

«But of course there is some kind of shadow which makes us all more careful.»