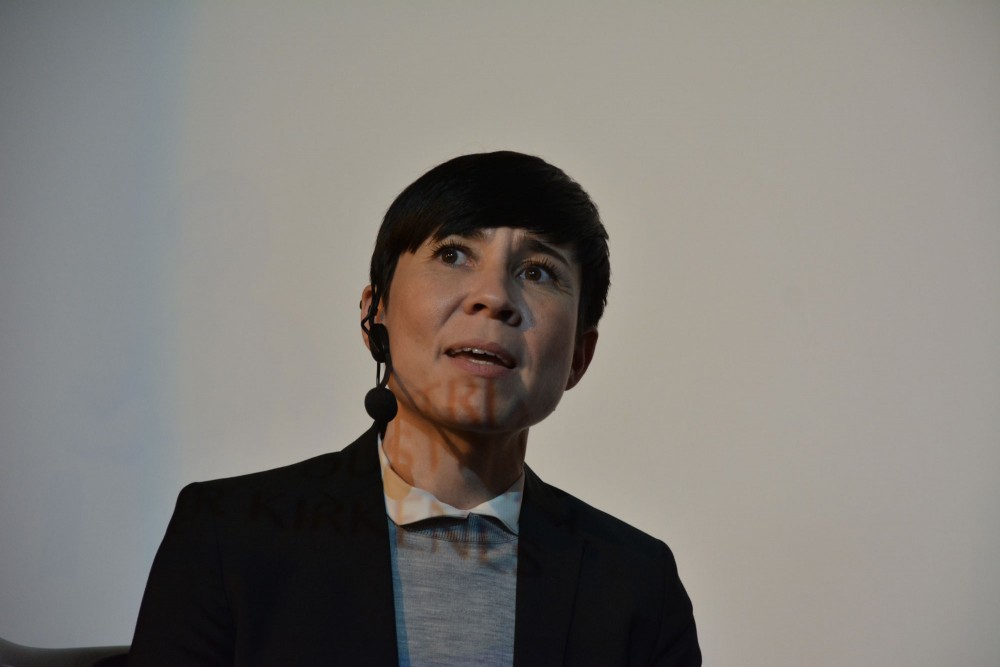 We have many common interests and we cooperate very well, Ine Søreide Eriksen says about relations with the big nearby neighbour.
Read in Russian | Читать по-русски
By

It was not the increasingly troublesome democratic developments, oppressed civil society, nor sanctions or expelled Norwegian businessmen which was the focus of Foreign Minister Ine Eriksen Søreide during her visit to Kirkenes, the Norwegian border town, this week.

On the contrary, Eriksen Søreide was in town to talk up regional cross-border relations with Russia.

In her speech delivered at the Kirkenes Conference, she also declined to shed more light on the mysterious arrest of Frode Berg, the former border inspector from Kirkenes who is behind bars in Moscow and charged with espionage.

True, Eriksen Søreide did shortly comment on the Berg-case in a subsequent Q&A session. And she did highlight the importance of freedom of speech in her opening remarks at the Barents Spektakel evening show.

But this was a day with stress on good relations and neighbourly friendship.

«In a world affected by unpredictability it feels good to come north, to Kirkenes, where optimism rules», the minister said as she took the floor at the conference, and added that she sees the event as «the most relevant arena for discussions on business development and politics in the north».

The comments pleased an audience of local and regional officials, business leaders and journalists, many of whom have been sceptical to the foreign minister’s High North engagement.

«We often have joint interests, we cooperate very well,» she underlined. And this is the way it must continue, she made clear.

«We want to preserve the good cooperation to the best for both countries and not the least to the best for the people living on both sides of the border [and] we must do what we can to prevent political disagreement from affecting people-to-people contacts,» she said.

And the way to make sure this happens is to encourage «practical cooperation», she highlighted and mentioned joint fisheries management in the Barents Sea, environment, nuclear security and search and rescue as key Norwegian-Russian success stories.

However, it was people-to-people relations in the area and the Barents Cooperation which was the minister’s key issue on this day. The regional cross-border cooperation structure, which was formally established in 1993 has developed into a key platform for interaction between the countries and regions in Nordic-Russian north.

In a world of aggravating tensions, military build-up and vanishing trust, Eriksen Søreide and her government sees the cooperation bodies of the Barents Cooperation as a much-needed back-door for continued cross-border contact.

The Norwegian foreign minister admits that there is an increasing «value gap» between the countries in the area and in her speech expressed concern with what she called «a weakening situation of civil society in parts of Russia», but this can be overcome, she made clear.

«No doubt, we manage to meet both challenges and opportunities in the best way when we stand together.»

The Barents Cooperation is the answer, she made clear and congratulated the audience with the 25-years anniversary of the regional cooperation bodies.

It was a message which was well received in Kirkenes, where locals on many levels are closely engaged in cross-border relations with neighbouring Russia.

What about the troubles?

However, people in the audience also raised eyebrows from the Minister’s reluctance to address the many severe and increasing difficulties in the region. The FSB’s arrest of Frode Berg, a much-trusted and respected local proponent of closer cross-border relations, has shaken the local Kirkenes society. The arrest follows several other troublesome cases, among them the entry-ban to Russia of newspaper editor Thomas Nilsen and the expulsion of successful businessman Atle Berge.

«The relationship with Russia can sometimes be challenging, but our experiences show that we trough dialogue manage to find good solutions», Eriksen Søreide said in a concluding remark.

Locals in Kirkenes appear to cross their fingers and hope that the minister is right.