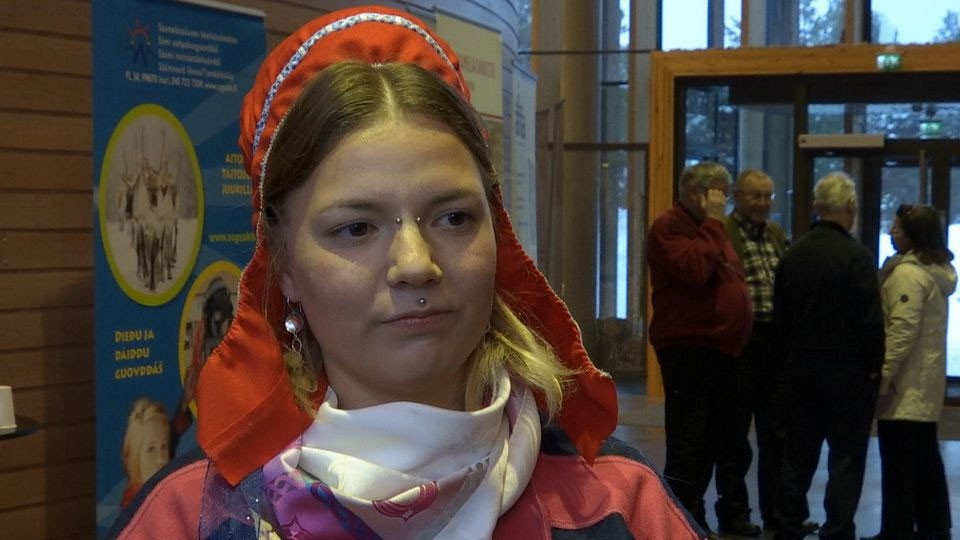 Ida-Maria Helander was one of the speakers in a recent discussion on Sámi reconciliation. Photo: Ville-Riiko Fofonoff/Yle

Last autumn, the Government of Finland decided to start preparing a reconciliation process dealing with Sámi issues. The process took its first steps on the 10th of February in Inari, when a seminar was held on what the reconciliation process has looked like in different parts of the world.
Read in Russian | Читать по-русски

The seminar was arranged by the Prime Minister’s Office, the Ministry of Justice and the Sámi Parliament in Finland, and its purpose was to discuss the expectations connected with such a truth and reconciliation process.

Ida Maria Helander, a young Sámi woman, participated in a panel discussion in which the speakers could express their thoughts on the possible reconciliation process. Many people had their doubts about the process, and Helander also felt this way.

“I’m afraid that we are going to expect things that we will not be able to achieve through a reconciliation commission. Therefore, I hope that we will be realistic, so that we don’t need to be disappointed again,” Ida-Maria Helander said.

“To talk about painful things”

Nils-Henrik Valkeapää, a Sámi ex-politician from the Enontekiö region, also participated in the panel discussion. According to him, the Sámi voice is not heard in the present situation. Thus, he is both optimistic and pessimistic about the reconciliation process.

“I’ve seen what the Government of Finland has done with all its committees and commissions: they seldom lead to anything. Every time we get positive proposals on how to improve the circumstances of the Sámi, they are ditched,” Nils Henrik Valkeapää said.

Anna Morottaja from Inari feels that the crucial thing during reconciliation would be to provide the Sámi with an opportunity to tell about the painful things they have gone through.

“It would heal our community; it could also help individual people. Talking about the bad experiences can enable you to move on. Then you might not need to pass these things down to the next generations. Maybe you could leave them behind, in the past where they belong,” Morottaja said.

“The Sámi themselves must support the reconciliation process”

Marie Wilson, who was one of the members of the Canadian Truth and Reconciliation Commission, participated in the reconciliation seminar in Inari. Wilson feels that it is extremely important to spread information on the issue, if you want to succeed with the reconciliation process.

“We had to put a lot of energy into giving information and explaining people why we made the kind of choices and decisions that we made,” Wilson explained.

Laila Susanne Vars, a law expert from the Norwegian National Human Rights Institute, also gave a long speech on reconciliation at the seminar. According to Vars, the first condition of launching a reconciliation process is that the Sámi themselves support it.

“The Sámi must be able to participate in the process, as the objective is to spotlight the history of the Sámi. And who will tell about it if not the Sámi themselves?” Vars asked.

What worked in Canada may not work in Sápmi

Vars works as an expert in EMRIP, the Expert Mechanism of the Rights of Indigenous Peoples, under the UN Human Rights Commission. She was a member of the committee that examined the situation of the Tatars/Romani in Norway in 2011–2015. The work of the committee can well be compared to the reconciliation process that is now about to be launched in Finland. Laila Susanne Vars reminds us that truth commissions can succeed but they can also fail in their work.

“People have great expectations. It’s important to learn about the different truth and reconciliation processes that there have been in the world, and to see which ones have worked well and which ones less well. And then adapt them to the everyday situation of the Sámi. What worked in Canada may not work in Sápmi,” Laila Susanne Vars said.

Vars says that there are Sámi people who do not see a need for a reconciliation commission.

“It’s a challenge to build up trust. The Sámi politicians may know about these things, but ordinary Sámi living in the small villages might not know and feel the need for a reconciliation process. Therefore, we need to spread information and tell why this is important. It’s enough that Sámi authorities, for example the Sámi Parliament, are of the opinion that the need is there,” Vars said.

Similar reconciliation processes have also been started among the Sámi in Norway and Sweden. However, the Parliament of Sweden rejected the proposal of launching a Sámi truth commission in Sweden on the 8th of February.

In Finland, the reconciliation process will next be on the agenda of the Executive Board of the Sámi Parliament. Later in the spring, it will come before the Sámi Parliament, which will then decide whether it will support the process. The Government of Finland has not yet decided on the mandate, name or commissioners of the possible commission.

Ida Maria Helander, who participated in the seminar in Inari, has a few hopes if the reconciliation process is launched.

– I hope that if we engage in the process, we will plan and prepare the matter well. That we will think, in advance, about what we want, what the objective is and what the world will look like afterwords, Helander said.

Translation from Sami by Kaija Anttonen