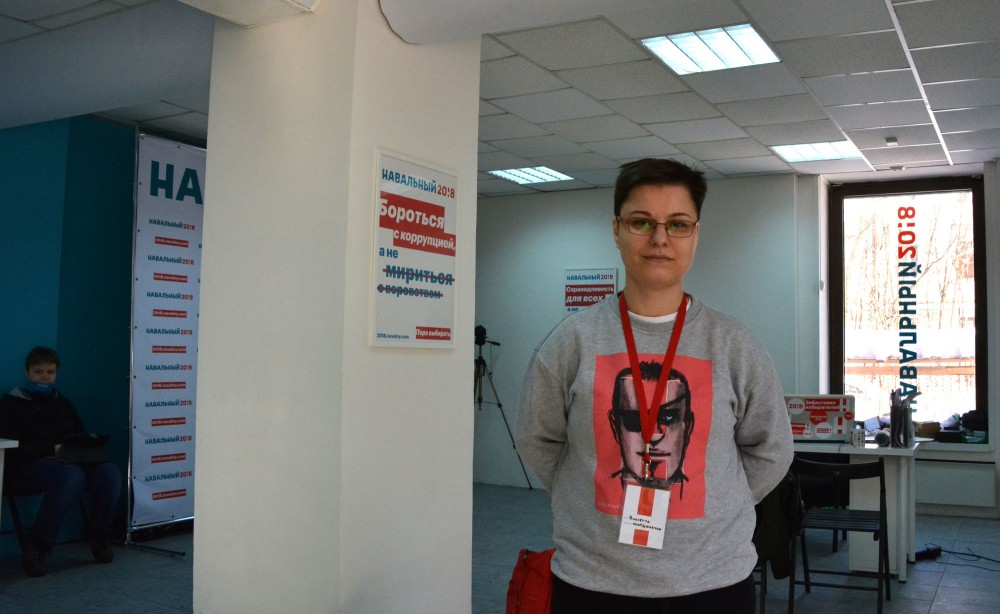 The police is after our volunteers, says Violeta Grudina, leader of Aleksey Navaly's office in Murmansk. Photo: Atle Staalesen

As the Russian Arctic city is preparing for elections, police cracks down on local supporters of Aleksey Navalny.
Read in Russian | Читать по-русски

“Policemen are standing right outside our front door trying to make it inside to catch my son,” says a mother in despair as she reaches out for help from the regional office of Aleksey Navalny.

The woman comes into the office as the Barents Observer is making an interview with office leader Violeta Grudina.

With less than two days left until the presidential election, the streets of the Russian Arctic city look calm with little sign of heated campaign. But there are tensions under the surface.

Regional authorities in Murmansk are now hitting hard against followers of Aleksey Navalny, the liberal opposition politician who is barred from running in Sunday’s election.

On Wednesday night, police officers detained seven activists. Two of them were put in custody for five days, the remaining got 10,000 ruble fines.

And more is in the making. The police is now guarding the streets in front of the houses of another five young people and has also put officers by their front doors trying to detain the youngsters.

“As soon as the door is opened, they will make it inside and detain my Aleksandr, says the woman, and makes clear that she does not dare to make it back home and that her son is trapped inside.

«How can we protect ourselves?», she asks. «They have besieged our apartment, and are trying to make it inside».

She is both angry and afraid.

«How can I protect my child?» she repeats. «I do not have enough power to go through this any more, and my pension is not sufficient to cover the costs.»

There is not much Violeta Grudina can do.

«The only thing I can recommend is not to open the door, and try to keep it that way until after March the 18th, when things might get calmer,» she says to the desperate mother.

The activists are all youngsters, some of them teenagers. They are risking studies and careers in what they say is a necessary fight for a more democratic Russia.

“These are tough times, because they are detaining our volunteers,” says Dima. He is one of the leaders of the local office. He makes clear that he does not see any other option than to continue the work for a more open and democratic Russia. «We do not have much choice.»

The situation in Murmansk is not unique. Similar action against oppostion groups is now taking place all over the country, political repressions monitoring group OVD-Info reports.

There has been constant troubles for Violeta Grudina and her volunteers since Aleksey Navalny opened his campaign office in Murmansk in June 2017. Pressure from the police has been constant. But it is now bigger than ever, Grudina says to the Barents Observer. She is herself charged in six cases and has been given a total of 90.000 rubles of fines. The latest, sixth, case is the most serious. If she looses, she might have to add another 300.000 rubles fine.

Like all over Russia, Navalny’s local office in Murmansk was opened when the presidential-hopeful still believed he would be able to run for office. Since the federal election commission in December rejected his registration as candidate, the local offices have called on his followers to boycott the vote.

In an unsanctioned rally on 28th January, about 300 people gathered to protest and call for election boycott. Murmansk police then detained 25 protesters, and these are the same people which the police now again is hunting down.

They are key volunteers for Aleksey Navalny’s campaign in Murmansk. And they play important roles also in the extensive election observer efforts planned by Grudina and her people. She is believed to have up to 200 volunteers that will keep close eyes on the elections.

Because frauds are highly likely also in this election, she makes clear.

Support our independent, nonprofit journalism. For 15 years, the Barents Observer has provide serious, fact-based journalism and stories from the Barents region and the Arctic. Please help us continue to be a voice for freedom in the borderland to Russia. You can give a small support here