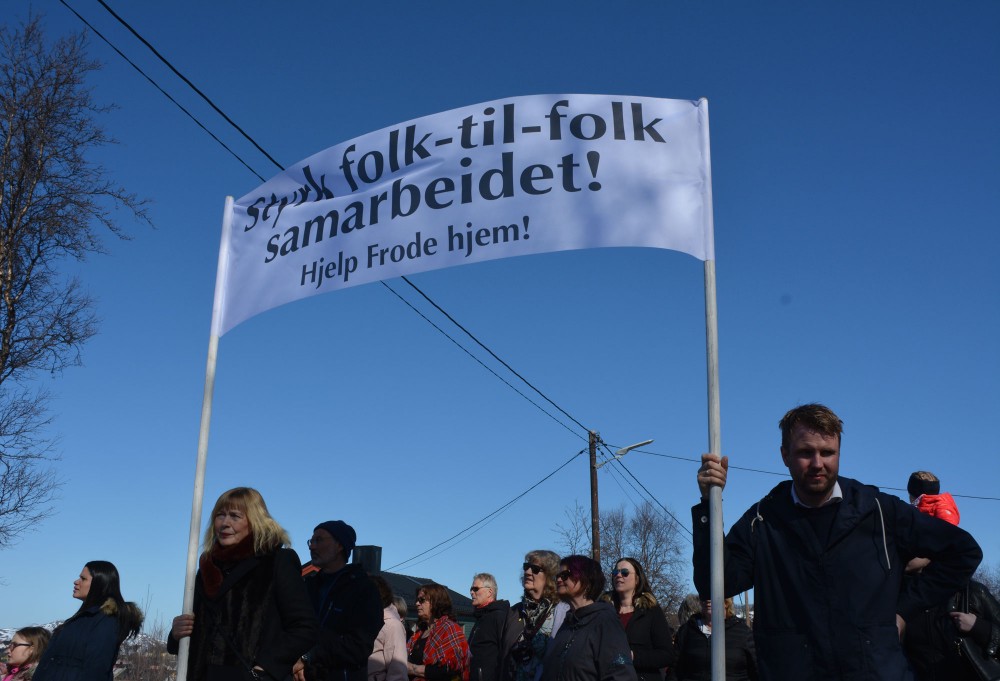 On May Day, a show of solidarity with Frode Berg

«Strengthen people-to-people cooperation, help Frode get home», was among the slogans in the 1st May parade in Norwegian border town of Kirkenes.
Read in Russian | Читать по-русски
By

Local support for Frode Berg has not vanished although the former Norwegian border inspector reportedly has admitted his engagement with the Norwegian secret services.

In the local May Day parade, the biggest part of the participants lined up behind the banner which called on the release of Berg, the local man charged by the Federal Security Service for espionage against Russia.

«Irrespectively of what we know and do not know and irrespectively of the spinning speculations, this case has a humanitarian aspect», says Inger Blix Kvammen. «We want to continue to support Frode and his family, we want to keep up pressure against the Norwegian authorities in order to get him home and we want to strengthen people-to-people cooperation,» she underlines.

Kvammen was among the ones carrying the May Day banner around the small town located only few kilometers from the border to Russia.

Also Anita Berg, Frode Berg’s wife, participated in the parade.  «It is a great show of solidarity for Frode’s case», she told the Barents Observer.

The Berg case was also among the key issues addressed in the local May Day speeches. In an gathering organized by the local labour union and the Labour Party, Thorbjørn Brox Webber told a fully packed community hall that Frode Berg is a victim of Big Politics.

«This local society has through history had to carry the raw and faceless geopolitics on its shoulders,» Webber underlined.

Webber, a local priest, Labor Party politician and key figure in the Support Group for Berg, put the blame on government politicians and officials in Oslo.

«The ones who could have given this troubled local people support, they have entrenched themselves in downtown Oslo, in the office of the Norwegian Prime Minister and deep into the nearby mountains of the military intelligence, and also in other corridors where power is exerted,» he said.

It is high time that Big Society lets us alone, so that we can develop this whole area across borders and nations in a way which puts the local population in focus ahead of the hostile game of Big Politics.»