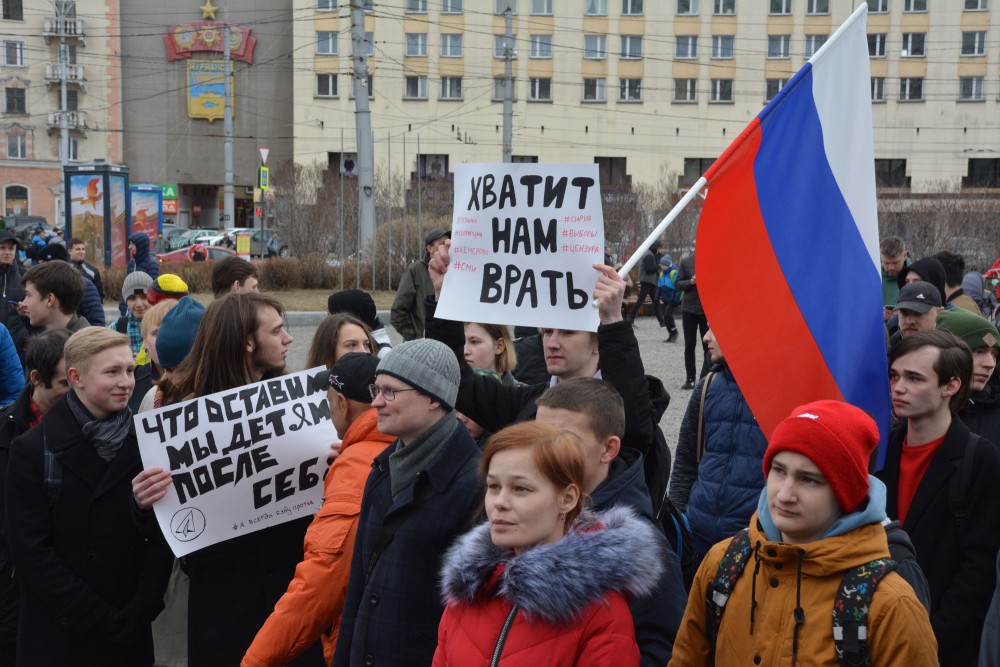 We must build a free and just society, Vladimir Putin underlined in today’s inauguration speech. But the young protesters who this weekend rallied in the streets of Murmansk and other Russian cities do not believe him.
Read in Russian | Читать по-русски
By

«Putin must go!», protesters shouted as they this Saturday assembled in downtown Murmansk. About 200 people took part in the rally, which was organized by followers of opposition political Aleksey Navalny. Similar protests took place all over the country.

Led by local activist Violetta Grudina, the protesters moved from the local park at Leningradskaya Street to the nearby central square.

«We are meeting to express our discontent with the position of the current rulers to the people, the injustice, the censorship, bad healthcare and the inauguration of Putin», says Dmitry, one of the young protesters who attended the gathering.

As the Barents Observer met him ahead of the rally, he was confident that it would end with a police crack-down and that he might end up in jail.

Trucks with riot police were spotted in a nearby back street, but the protesters were ultimately left alone and it all proceeded quietly.

The country-wide rally took place as the Kremlin was preparing for the grand inauguration ceremony of the fourth-term president.

In his speech, Putin highlighted issues which might appease many of his critics.

Surrounded by the gold and extravagance of the Kremlin, Putin told the top brass of his country that he wants «a modern and dynamic Russia which energetically can take on the challenges of its time.»

He highlighted the democratic and civil rights laid down in the country’s Constitutions.

«In the harmonic unity of the free citizen, the responsible civil society and strong and capable democracy I see a solid basis for the development of Russia.»

«We need a breakthrough in all spheres of life, […] and I am deeply convinced that such breakthroughs can only be provided by a free society which accepts all things new and progressive and rejects injustice, stagnation, ignorant conservatism and bureaucratic inertia,» Putin said in the speech.

«Our priority is Russia for the people, a country of possibilities for the self-realization of every individual.»