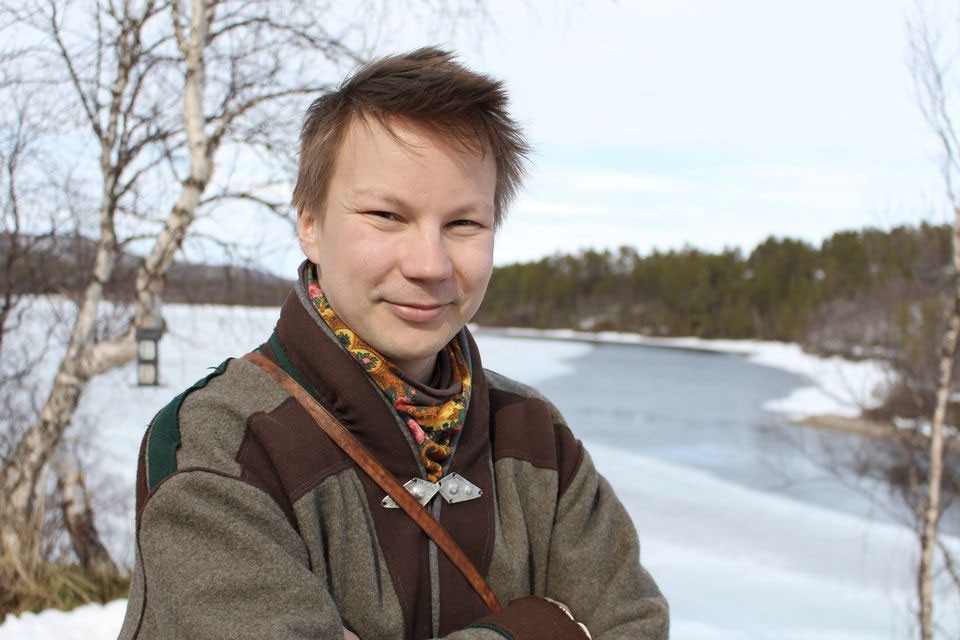 The art of Niillas Holmberg, a poet, musician and actor from Utsjoki, Finland, has become more and more political over the years. This summer, Holmberg publishes his first thoroughly political book of poetry.
Read in Russian | Читать по-русски
By

Niillas Holmberg, a multiartist from Utsjoki published his first collection of poems at the age of nineteen. It dealt with Sámi identity and life in an urban setting far away from Sápmi, the land of the Sámi.

«In my first books, my poems were almost as if from a diary. I wrote about the things that were on my mind each day,» Holmberg tells.

Gradually, Holmberg’s art has grown more and more political. For instance, he has written a protest song against mining activities in Gállok, Sweden, and, together with his band Ylva, he has taken a stand against the Deatnu River Fishery Agreement and for the fishing rights of the Sámi.

In the summer of 2017, Holmberg was one of the people who started the Long Live Deatnu movement that fought against the above-mentioned fishery agreement and declared a moratorium in the area of Čearretsuolu near the village of Utsjoki. He also wrote a protest song called Ellos Deatnu (Long Live Deatnu) during the summer.

This spring, Holmberg participated in a demonstration in Trøndelag, Norway, against the construction of the biggest windmill park in Europe in the lands of the Sámi.

The artist tells that he wants to do his part for a sound society, and, therefore, political issues appear in his art too.

«For me, society can only be healthy if we really understand that we’re just a small part of a bigger whole. That we’re not supposed to be the masters.»

Holmberg says that he would want to move on into a world where traditional values would be the basis of people’s lives to a much greater extent than today.

«Today, we are steered by the capitalistic values of the dominant, Western society, and this is, of course, contrary to our traditional values of being part of nature, and also our respect for nature. Socially, it’s also contrary to our collective thinking.»

This summer, Niillas Holmberg (28) will publish his sixth collection of poems, which he himself describes as being political to the core. In the book, Holmberg deals with the harmonious relationship of the Sámi, and indigenous peoples in general, to nature. He also highlights what prevents the dominant society from exhausting and utilizing the lands of the Sámi completely.

Holmberg’s book is titled Juolgevuođđu (“sole” in English), and, in it, the poet has created a symbolic and metaphorical world in which the shoemaker is the enemy and the wrongdoer.

«It’s the Stállu, or Ogre, of this story, the one that puts something between our feet and the land; something that breaks this connection. The idea that we must get back on our feet, as we are in touch with the land through our feet, is one of the poetic statements of the book.»

Niillas Holmberg told about his new book in connection with the Conference on Sámi Oral Heritage at the Sámi Cultural Centre Sajos in Inari, Finland, in May. The book Juolgevuođđu, illustrated by Inga-Wiktoria Påve, will be published this summer in North Sámi, but is already being translated into Finnish, English and Norwegian.

This story is originally posted by the Yle Sapmi and re-published as part of Eyes on Barents, a collaborative partnership between media organizations and bloggers in the Barents region