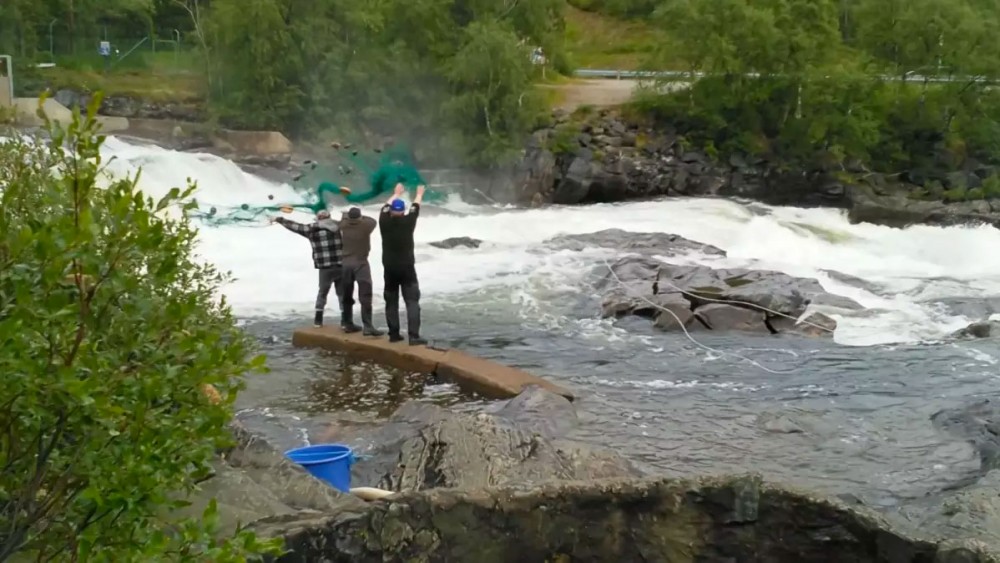 A wide cast net has been spread on the cliff on the Skoltefossen Falls near the mouth of the River Neiden in Norway. The Skolt Sámi have fished with such a cast net, also known as käpälä (“the paw”), on the River Neiden for centuries.
By

Neiden, Norway.  In the middle of the day in July, people start to gather on the rocky banks of the Skoltefossen Falls. The throwers of “the paw seine” start to surround the net and make it ready. This will be the last cast of the week, and the throwers are getting tired.

They grab the cast net carefully: three men start taking the net to the middle of the river while two men stay on the shore, ready to pull.

Maintaining a tradition with men

Seija Sivertsen from Neiden is one of the few women who participate in fishing with the cast net, or käpälä. For her, the tradition is one of the most significant Skolt Sámi traditions.

Fishing with the paw seine is really important for me. It means a lot to me, as fishing with the cast net has traditionally been a men’s task. I stand on the shore and pull the net in after the men have cast it in the river, Seija Sivertsen says.

Seines are used for fishing all around the world, but a cast seine such as the Skolt Sámi paw seine is not a common sight. Sivertsen explains that the name of the net – “the paw seine” – comes from the bear’s paw.

«This seine is like a bear’s paw with which the bear catches salmon in the middle of the river. When three men throw the net from the right spot on the bank, the net flies and spreads out like a Sámi lasso, and the salmon are caught in the paw-like seine,» Sivertsen describes.

It is no wonder that the Skoltefossen Falls has attracted salmon fishermen already for centuries. The salmon of the River Neiden gather in the natural basin below the falls. We hear that, in the old days, the basin downright boiled with salmon.

From this falls, the salmon migrate to spawn in the upper reaches of the River Neiden. It is a majestic sight to see the salmon jump in the falls.

We know that the Skolt Sámi have cast the paw net on the River Neiden ever since the 1500s. Each summer, the casting period lasts for twenty days.

«For the Skolt Sámi, this has been one way of catching salmon for the whole family. I really appreciate this tradition, and I hope that it will also be part of our culture in future,» Sivertsen says.

The method has also been criticized

In the course of years, this traditional method of fishing has also been criticized, as the cast net may give you hundreds of kilograms of salmon during the casting period.

But according to Sivertsen, there are restrictions on the catch: it stays the same per a thrower every year. Each person entitled to participate in cast net fishing is allowed to take the maximum of 40 kilos of salmon.

«People say that we fish too much, but we also release salmon. We don’t take all the salmon that we catch; for example, we release the biggest female fish back into the river. And though there are many cast shifts in a day, we don’t necessarily even fish during every shift,» Sivertsen explains.

However, not all years are alike. Weather conditions vary and have a great impact on how well fishing with a cast net succeeds each year.

«There are good years, and there are bad ones. The years with floods are difficult,» Sivertsen says.

Looking forward to the first casts of the year

In one respect, cast net fishing is similar to the other traditional Sámi methods of fishing such as drift net and weir fishing: it is not certain that there will be enough fishers participating in fishing the following year.

In Neiden, the average age of those entitled to participate in cast net fishing rises all the time, and hired men are often needed.

«We should get young people to come and learn the method: learn about this tradition and how we Skolt Sámi have caught fish.»

Today, only those people who live permanently in Neiden, Norway, and own land in the neighborhood of the River Neiden are allowed to participate in fishing with the cast net. This summer, four parties of five persons each participated in the fishing, with each party casting the seine for a day at a time.

For the throwers, casting the käpälä is the culmination of the summer, which they start to look forward to as early as late winter. The inhabitants of the village of Neiden are growing older, but Sivertsen does not believe that the tradition will disappear. Though the winter is long, you don’t forget how to cast the net.

«Every year, the shores are full of spectators on the first fishing day. People are fascinated by this way of fishing, and casting the seine is, of course, quite unique. Often, we are afraid of people falling off the rocks on the shores,» Seija Sivertsen says.

When a casting shift comes to an end, you can hear the hum of the falls but also the fishers laughing and rejoicing on the cliff. Cameras flash when the salmon catch is divided between the participants.

And this is not just a matter of keeping traditions alive.

In honor of the first casts, local inhabitants gather at the fishing cabin in the vicinity of the Skoltefossen Falls, to eat the salmon soup meant for the whole village. Once more, the River Neiden brings the inhabitants of the small village together.