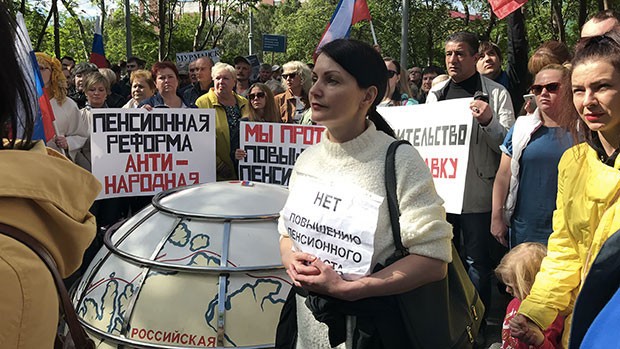 Locals assembled in the streets of Murmansk to protest against the government’s pension reform, writes Blogger51.
By

The meeting turned out to be crowded, energetic and real. Between 500-700 people gathered in the garden near the monument to the Conquerors of the Arctic despite summer vacations and good weather.

And people of different ages and life experiences gathered there so there were young people, pensioners, and people near retirement age. Only the 30 to 40 year-olds were under-represented in the crowd.

I don’t think I have ever seen such unanimity expressed simultaneously by three different generations before.

The Communist Party also had activists there. And Alexander Pervukhin’s trade union people were collecting signatures there. I saw many cards from last Friday’s trade union meeting which was not nearly as crowded. Maybe it was the weather or the time of the meeting or perhaps it was simply the lack confidence by trade unionist that kept the numbers down at that meeting. But at this rally, Mr. Pervukhin along with the local deputies were branded as puppets of the United Russia Party by the organizers of the rally.

And when the organizers finally gave people from the crowd the floor, the speakers were very powerful and offered sound thoughts that found support from those in attendance. The proposals ranged from the collection of signatures to sending the offenders to jail to starting their own Armenian style “velvet” revolution.

«What is happening here is like the end of the USSR!» was heard from the crowd.

And then another voice from the crowd added «For the last six years, they have been trying to steal back from us what the asshole Americans pindos stole from them.»

All in all, it was a very strong performance. If you want to watch, the videos are seven minutes but they are worth it. But it does not have to be seven minutes because if you run the video at half speed, it is even better!