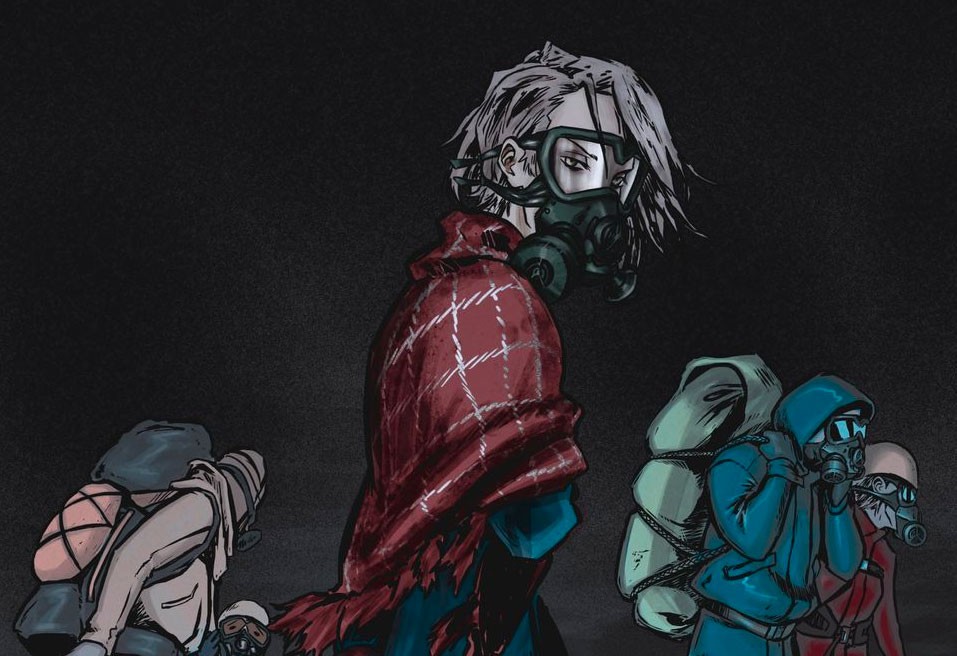 A young Sámi artist from Inari, Finland, made images of what Sápmi, the land of the Sámi, might look like in a hundred years. Sunna Kitti’s works of art are partly gloomy, but they also show a spirit of hope and community.
Read in Russian | Читать по-русски
By

“The year is 2118. Nothing is fine. Sápmi has become the Sápmi of Murphy’s law: everything that can go wrong has gone wrong. This process has been initiated by climate change.”

Sunna Kitti (27) from Inari, Finland, was chosen the 2018 Visual Artist of the Márkomeannu Festival in Evenes, Norway. The exhibition she created for the festival reflected her guess on what Sápmi might look like in a hundred years, in 2118.

Kitti’s exhibition – at display at the Márkomeannu Festival in late July – consisted of ten images that suggested how the Sámi have managed to provide themselves with a last refuge in the future. This article presents three of the ten pictures. The exhibition was Kitti’s first exhibition.

The year is 2118. The leaders do not care about the Sámi; they just want to control them.

Sunna Kitti on the imaginary future of Sápmi

«The end of one era is the beginning of another era»

Climate change, politics and the future are themes that Sunna Kitti often reflects on. Therefore, creating an exhibition of ten works of art that represent the year 2118 was not a foreign process for her – on the contrary. Kitti tells that she likes and is inspired by science fiction and films that take place in the future.

Kitti’s style is a fusion of Japanese and Western comics art. The future Sápmi of her exhibition has been created by drawing on a computer.

“In a hundred years, Sápmi is a place where the Sámi need to pull together, as democracy no longer exists. Democracy will disappear when fascists and dictatorships have got all the power.”

Sunna Kitti has used the artistic licence in her works. She says that they are images of future, but they also contain things that are already taking place. They reflect an artistic view; they are not Kitti’s own ideas about the future.

«There’s always something that comes after the end of the world. The end of one era is the beginning of another era,» she explains.

«I’m afraid that democracy will disappear. That those who have a lot of money and influence will grab all the power.»

Kitti reveals some of the thoughts behind her art: in a way, her works rise from the fear that the sea will encroach on more and more land, cities will vanish, and the rate of biodiversity loss will escalate.

«In a hundred years, there would be only a few animal species here,» she reflects.

“These problems have been initiated by climate change. Climate change has also made the economy and society in general unstable.”

And Kitti imagined. She thought that everything would be initiated by climate change. It causes economic problems, making society in general unstable.

«Indigenous peoples and minorities have always had a hard time. I imagined what the future will look like when leaders don’t care about the Sámi but only want to control them,» Kitti says.

In my works, many things that are already happening in many places will happen for the Sámi in a hundred years, things that affect poor people’s lives in different parts of the world. I imagined that they would also affect the lives of the Sámi in future.”

Sunna Kitti on the imaginary future of Sápmi

Kitti’s images show oppression, and their color world is, partly, dark. However, Kitti points out that the three tidbits of this article are perhaps the darkest pictures of the exhibition. Earlier, Kitti has illustrated textbooks, for example, but the works of the exhibition show a different style.

«I wanted the pictures to reflect a sense of hopelessness, but I didn’t want them to be so pessimistic that everything would seem just dark.»

“De-Chipping, a sanctuary. The Sámi have discovered a common refuge. Hope can be found even in the darkest place.”

But the artist reminds us that we should not lose our hope. There are problems, but we can still win the fight against them.

«Though there are real threats, I’d say that we should not give up yet; we still have time to strive for the best possible future,» Kitti says.

«Of course, the world will not end; our planet will always be here.»

Translation from Finnish and Sami by Kaija Anttonen

This story is originally posted at Yle Sapmi in Sámi and Finnish and re-published as part of Eyes on Barents, a collaborative partnership between news organizations and bloggers in the Barents region.