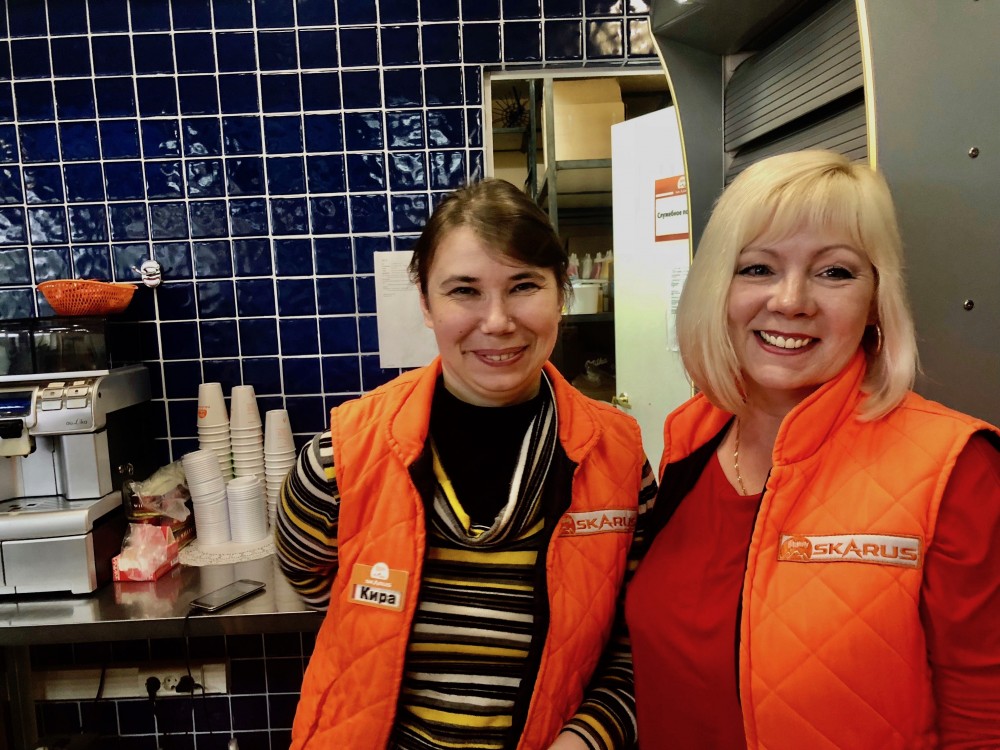 LOCAL: Svetlana Bigayeva and Kira Morav work at a gas station outside Zapolyarny. Bigayeva believes local processing of border certificate applications is the way to get more people to apply.

Pechenga district has 37,500 inhabitants. Only five percent of them have border certificates.
Read in Russian | Читать по-русски
Text og photo:

Svetlana Bigayeva and Kira Morav sell diesel and gasoline to Norwegian border residents at the gas station on the outskirts of Zapolyarny. They do not travel to Norway, although.

Is it like getting in touch with the Norwegian guests or they just fill the fuel, pay and leave?

“Oh yes. We have many regular customers who drink coffee and have some snack while they are here. We talk to them and get acquainted so that later I greet them as I meet them on the street,” Svetlana Bigayeva answers.

“I can not explain exactly why, but it is obviously good with contact over the border as we can get to know each other. It was easier before as you could get a border certificate in Zapolyarny. Now, one must travel to Murmansk twice. I used to travel to Norway quite often, but now I have not had time to get the papers done.”

What do you think Norwegian politicians should do to make more Russians come to visit?

“Establish a visa center here in Zapolyarny or in Nikel,” Svetlana Bigayeva answers.

“It’s cumbersome to travel to Murmansk, and it will be expensive for many as you have to take time off work and pay for the trip to Murmansk as well.”

Since 2012, residents in the Norwegian-Russian border areas, namely parts of southern Sør-Varanger and the entire Petchenga municipality, are able to visit each other without a visa but with a border certificate.

A border certificate must be renewed every three years. On the Norwegian side the entire process can be fixed in Kirkenes where Russia has a Consulate General.

Russians must drive to Murmansk to arrange documents and record biometrics, fingerprints. The ready certificate must be retrieved on-site, which can be done by the applicant’s authorizing as well.

In distance, the road from Zapolyarny to Murmansk is 160 kilometers and from Nikel to the county capital it is 186 kilometers.

So it’s evident why so many of “people in the street” in the nearest neighboring cities to Norway have never crossed the border. Random people in the street I’m talking to have different explanations why they do not travel to the neighboring country. There may be employment in the military, quarantine by employment, poor economy, lack of foreign passport, debt ratios implying they are not allowed to leave the country, Kirkenes being an extremely boring place - or that they have not had time or opportunity to fix the documents.

Edvard Losev, Sergey Sorokin and Roman Karatsupin take a little break from the work of constructing the new church in the central part of Zapolyarny to answer my questions. None of them have been in Norway for various reasons.

But it has nothing to do with the political situation.

“The sanctions do not affect us, and it may be even better with the sanctions because we get more independent from Europe,” says Sorokin.

At the garages in the neighboring town of Nikel, Andrey Antilov is to clean and sort out the mess.

“No, I do not travel to Norway. If I want to buy something, I’ll buy it here.”

Because you want to support Russia?

“Yes, I do. But actually it’s just because this is where I am,” smiles the gentle mining worker.

“If I were to travel to Norway, I would have to get a visa or border certificate. But I am working when they are open and when I’m free they have it closed.

Do you have a lot of Norwegians to encounter?

“No, I would not say that. You are the second Norwegian I have ever talked to. Once I have talked to Norwegian man who had a girlfriend here.”

Do you think the mood between people has changed following spy stories and sanctions?

“No, I do not think so. We must open the borders, not just for Kirkenes. Just take a look at the World Cup and how Russian media wrote that the visitors got a good impression of Russia. That’s how you break down barriers. The spy case, I think, is not discussed in Nikel, I have not heard people talk about it while I see that lots of Norwegian cars come here.”

In the allotment gardens in Pechenga, just like in the area where Norwegian border residents are still allowed to move, there are few people in a day without two-digit heat and with some rain in the air.

But Nina Alekseyevna (83) is there and potters around the garden.

“Oh, so nice to meet a Norwegian. Now I’m happy,” Nina smiles. She takes my hand and kisses it.

“I am a child of the war and I know how important it is for people in Norway and people in Russia to stay friends. When people begin to get mad and start a quarrel, there is danger afoot.”

Nina is from Smolensk, and came to Zapolyarny in 1962. She had to be with the brother and build the city.

And you also helped?

“We all helped, there was a lot of work to be done, she smiled and sat down in the garden where the strawberries are well-groomed and fine. The idyllic surroundings are at stark contrast with her wartime memories.”

“It’s hard to talk about the war,” she says.

I’m sorry for bringing the memories to you!

“Oh, no, not that’s why. The memories are always with me, every single day. Dead people, the fascists, all terrible things they did. I know what war is and I know peace is better. That’s why I’m say that we must have a lot of contact over the boundaries. The more contact, the better it is.”

On Norwegian side, Hugo Dalmeyer Nilsen sits. He looks out of the kitchen window in Grense Jakobselv, a stone throw away from Russia, saying that he once had a border certificate, but hasn’t renewed it.

“The first time I was in Russia was five years ago,” he says.

“But I have not renewed the certificate. I did not do it last year and I do not think I’ll do it this year either.”

“Not now as I can not go to the places in Russia I’m interested in, he smiles and points out of window.”

“It is on the other side that I would like to have been. Those who lived here before the war could walk freely over the mountains, pick cloudberries, and fish. It rose no questions, the area belonged to Finland from 1920.”

When Hugo was little, they bathed a lot in the river.

“We often got over the border, but nobody said anything about it, as long as we stayed in the river. There probably were more guards at that time. I have not seen a single Russian on the other side for many years.”

What do you think about the situation between Norway and Russia now?

“I do not think so much about it, nothing has happened since 1968 when they targeted cannons against Norway, there was nothing out of that episode, and back in time we have never been at war with each other.”

Norway’s Consul General in Murmansk, Erik Svedahl, says he does not think it would be possible to arrange a visa center in Zapolyarny or Nikel because the actual text of the cross-border agreement between Norway and Russia states that border certificates must be issued in Murmansk.

In case of renewal of the border certificate, the applicant must show up again at the visa department in Murmansk. The reason is that biometrics can only be stored for a month.

Norway has wished to open the Honorary Consulate in Nikel, which has not been realized.

“And yet this would not be a kind of issue a honorary consulate could handle,” points out Svedahl.

In total, Norway has issued 4012 border certificates since the treaty entered into force in 2012. As of May 15 2018, 1800 were valid. In the beginning of August another 100 were issued, but logically enough also some have expired by the date.

The Norwegian Consul General describes that there was a completely different climate in 2012. There were hope and expectations for Shtokman and Norwegian participation. A total of 40 Norwegian companies operated in Murmansk.

Now there is only a couple remaining.

Svedahl believes that sanctions against Russia and counter-sanctions do not affect the motivation to cooperate across borders.

“No, up here, at regional level, one is more concerned with the closer things,” he thinks.

Previously there had been an attempt of local reception of applications for border certificates in Zapolyarny and also with Saturday opening hours at the visa department in Murmansk.

Is Norway in fact making obtaining border certificates as difficult as possible as a way to maintain a “fence against the Soviet”?

“No, the very point of the Barents cooperation is to open the border. We want people to get around and stay more familiar. Maybe it’s a complicating factor, but I think those really interested in obtaining a border certificate or a visa will succed. Nonetheless, I think we will try to have Saturday opening hours again. We’ve done it before and I want to try it again,” says Erik Svedahl.

The Norwegian Consulate General does not have any overview of how many of the 37,500 inhabitants in Petchenga can be qualified to apply.

Russia has issued 7419 border certificates since the cross-border agreement was introduced, according to Russia’s Consulate General in Kirkenes. 3375 of these are valid now. On the Norwegian side, about 9700 can apply.

This is the first in a serie of articles with focus on life and contacts in the Norwegian-Russian borderland in the north.