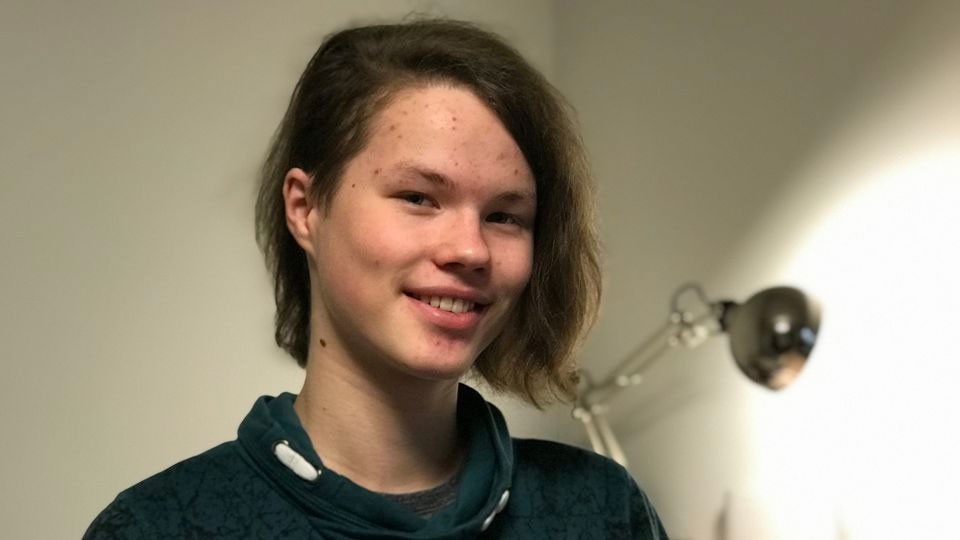 Hánno Länsman (16) studies at Helsinki Upper Secondary School of Languages. He likes to live in Helsinki where he has friends and many things to do.  Photo: Ritva Torikka / Yle Sápmi

Sápmi, the Land of the Sámi, cannot offer all the young people the kind of schooling they are interested in. To follow their dreams, many have to move away from their home region.
Read in Russian | Читать по-русски

Education opportunities have increased in Finnish Sápmi, but many young people still have to move south to study. The education provided in Southern Finland attracts them, and many have to stay in the south as there are not enough jobs in the north. This is one of the reasons behind the fact that sixty percent of the Finnish Sámi live outside the Sámi Area.

Hánno Länsman, a 16-year-old Inari Sámi from a reindeer-herding family, comes from a small place forty kilometers toward Angeli from the village of Inari. During compulsory schooling, he traveled every day by taxi to his school in Inari. During weekends and vacations, he participated in reindeer round-ups and earmarking. When he was younger, he planned to study reindeer herding at the Sámi Education Institute in order to become a reindeer herder.

However, his plans changed when he was going to secondary school. He became interested in languages. Therefore, he now studies languages at Helsinki Upper Secondary School of Languages in Eastern Helsinki, and not reindeer herding in Toivoniemi, Inari.

At the School of Languages, Länsman can study the languages he likes. In addition to the ordinary English and Swedish, he now studies also Japanese and French. Next year, he will also start studying Chinese and Spanish. The idea of going abroad was an important reason for choosing the school in Helsinki.

«I liked the idea that the school offered many languages. I can choose the languages I want to study. We also have school camps abroad and in a variety of places. These possibilities made me move here.»

Likes to be in Helsinki

Hánno Länsman lives in a student apartment in Helsinki together with two university students.

«I have very nice housemates, and the environment is really nice. It’s been great here.»

Every morning, Länsman takes the bus and the underground to the school. He says that he is too busy to long for home. Studying takes time, and he has many friends and hobbies.

«I play badminton in our school team. So I go to practices. And the school offers extra courses during our leisure time. In the third term, I will take a course in linguistics.»

Länsman is not yet sure about what to do later in life. He is interested in philology, but also wants to learn many languages and use them in practice.

«I guess I’m sort of a go-with-the-flow man. I really like languages, music and dance. I don’t know yet what I want to work with, but I guess I will study languages more.»

Hánno Länsman’s mother Pilvi Aikio misses her child, but she is, nevertheless, pleased that her child is content with the school. Hánno wants to learn languages, and now he can do it. The mother’s mind is also at rest because the family knows many people in Helsinki; they can help the son.

«It was clear for us all the time that we would let Hánno move to Helsinki. We have many very dear friends there who can help our son if needed. It was very easy for me to let him go there.»

Aikio wants her son to be able to choose himself what he wants to do in life. However, she is certain that Hánno will return to Sápmi.

«That’s how I feel, as he really likes to be here; he likes reindeer and nature here a lot, so I’m sure he will come back here.»

As concerns reindeer herding and working with them, the mother doesn’t know what to say. But she has a wish.

«That’s a difficult question. But I do hope that he will come and work in reindeer herding,» she says.

Love for theater took her to Helsinki

Pinja Pieski from the village of Karigasniemi was also a 16-year-old adolescent when she moved to Helsinki to study there. She went to Kallio Upper Secondary School of Performing Arts. The reason for choosing this school was that she wanted to advance in the fields she was interested in: dance and theater.

«I had always wanted to work in the field of arts, and the opportunities are not the same up north.»

After graduating from high school, she studied drama in Lahti. Pieski, who is now twenty years old, works temporarily at a kindergarten and likes living in Helsinki.

«This suits me well. I like the fact that there are many kinds of people here. And you can do so many things in Helsinki. All the time, there’s something going on that you can participate in.»

Pieski is too busy to miss her home in Karigasniemi. When she moved to Helsinki, she had so much to do that she did not have time to think about home, but, later, she has felt a longing for home every now and then. Therefore, she goes home at least a few times every year. She hopes that, one day, she will be able to work in Sápmi, at least with some projects. However, she does not yet plan to move completely to the north.

«It’s a difficult question, but right now I want to study more. And I can’t do it in the north, not in the fields that I am interested in.»

Länsman has a piece of advice for the young people who are now at school trying to figure out what to do and where to study. He says that one should first find out what one is interested in and which fields seem attractive.

«Put the practical things aside for a while, you can think about them later. First, choose the schools that you are interested in.»

Pieski also advises young people to choose their school on the basis of what seems interesting for them.

«It’s a good idea to find out what you want from the school or which field you’re interested in. For me, it was very clear that I wanted to come to Helsinki.»

Pieski encourages young people to be brave and leave home. Her life has changed a great deal, but she feels that living in Helsinki has taught her to appreciate her home region in a new and different way.

«My grandmother was very sad when I left; she was sure that I would forget the Sámi language. But actually things have gone the other way around. Leaving has strengthened my identity.»