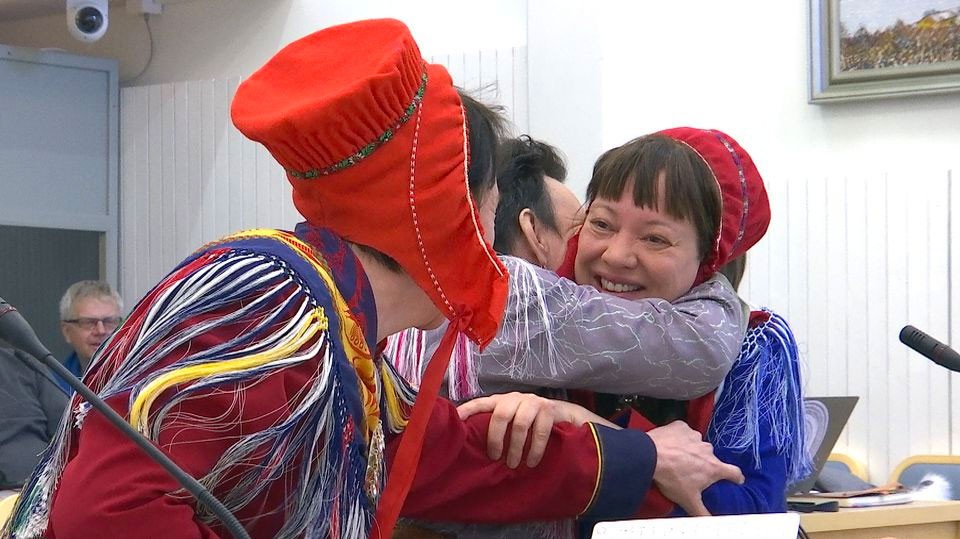 The District Court of Lapland has acquitted all the defendants in the case that dealt with fishing in the river system of Tana.
Read in Russian | Читать по-русски

The Sámi fishers that were accused of fishing without a licence and of a fishing violation in the Tana river system gathered in the Utsjoki Municipal Hall on Wednesday 6 March to hear the court decision in their case. The judgment was pronounced by the judge of the District Court of Lapland through video streaming from Rovaniemi.

Judge Esko Hohti started by citing the grounds of the decision. Every now and then, you could see the accused smile. This happened especially when the judge said that the defendants had a constitutional right to fish in their home rivers.

A few years ago, the new Fishing Act and the Tana Fisheries Agreement restricted the fishing rights of the local people. The four fishers who fished in the River Vetsikko and the one who fished in the River Utsjoki did not accept this. In the summer of 2017, they intentionally violated the Fishing Act in their home rivers in order to end up in court.

In court, the accused resorted to the constitution of Finland, pursuant to which the Sámi have a right to their own culture of which fishing is an important part. On 6 March, the District Court of Lapland confirmed that the accused did not commit a violation when they fished according to the old regulations and restrictions.

“The restriction of basic rights must be based on acceptable criteria. In this case, no acceptable reasons for restricting basic rights have been found.” This is what the decision of the District Court of Lapland says.

In its judgment, the District Court admits that the traditional fishing of the Sámi does not threaten the salmon populations in the rivers Vetsikko and Utsjoki, and, therefore, there is no need to restrict such traditional fishing the way the new regulations have done.

The accused were elated by the decision

Tears ran when Judge Esko Hohti finally pronounced the decision, according to which the accused fishers were acquitted.

«The court has now declared that we Sámi have rights to our culture. What a great feeling this is,» rejoiced Heidi Eriksen, who was accused of fishing without a licence on the River Vetsikko.

Another fisher from the same river, Kati Eriksen, said that they initially thought that the court decision would mean nothing.

«But the realization that we were going to win the case evoked a lot of feelings: we had not done this and waited for a year and a half in vain,» Eriksen said.

Though victory felt good, it was just the first step in paving the way for Sámi fishing rights. The fishers now expect that the public prosecutor will take the case to the Supreme Court in order to create a precedent.

«Then, it will have an impact on the whole of Sápmi, or the Land of the Sámi, and not just on us five people. It will apply to everyone,» said Anne Nuorgam, who fished on the River Vetsikko.

Esko Aikio, who fished with a gill net in the River Utsjoki after the fishing period and was therefore accused of a fishing violation, has kept telling that this court decision is only the beginning of the proceedings of the case. Nevertheless, he also became glad when he heard the decision.

«I have to admit that it was a good feeling, though I also know that it was just the first phase of the victory,» Aikio said.

The fishers also consider a decision by a disctrict court important, though they still wait for the courts of appeal to confirm the fishing rights of the Sámi.

According to Esko Aikio, the decision may have an impact on how the authorities will interpret the present regulations as concerns the inhabitants of the area. He expects that the judgment will also bear on the sale of fishing licences by Metsähallitus in the summer of 2019 and on the readings of revisions to the Fishing Act in the Parliament of Finland.

Aikio also hopes that the Ministry of Agriculture and Forestry would now discuss whether to change the fishing regulations concerning the tributaries of the River Tana so that the regulations would guarantee the basic and the human rights of the Sámi.

The prosecutor will appeal the decision

After the decision of the District Court, the parties have seven days to register their intent to appeal the judgment and thirty days to appeal. Prosecutor Anita Haapakoski intends to try to have the decisions changed in order to create a precedent.

«This is an extremely important and special decision,» Haapakoski said.

It may still take several years before the case has been closed.