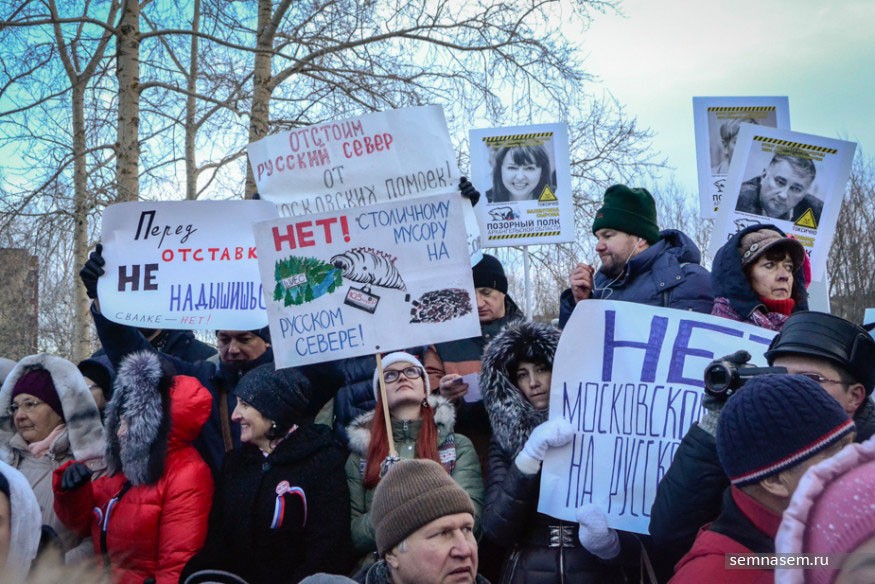 Rally against garbage from the capital. Photo: Karina Zabolotnaya, 7x7-journal

The war against the importation of Moscow garbage in the Arkhangelsk region and the Komi Republic is heating up.

At about 11 pm on Friday evening, a convoy of 11 vehicles led by an excavator rolled out of the fenced Shies Station construction site heading towards the village of Madmas. Near the fence, activists were carrying out a round-the-clock watch, marking the comings and goings at the unlicensed and unwanted proposed dump site. The dump trucks attempted to break through the picket lines and the excavator rammed the protestor’s trailer. The protestors ran in front of the convoy, pulled the excavator to the side of the road and one of the protesters fell under the bucket.

38-year-old Vladimir Kogut from Arkhangelsk was conscious when taken to the hospital but how serious his injuries is yet unknown. Kogut has been on duty at the Shies station since December.

Shies station is known as the last frontier to local residents protecting their homes in every possible way from the trainloads of Moscow’s garbage intended for landfills now under construction. The protests against the import of the capital’s garbage to the Arkhangelsk region began last in August at the Shies railroad station, 30 km from the village Urdom. Locals noticed a large work brigade clearing trees without public hearings and without notifying local authorities.

At first, regional officials denied that they were building a landfill to bury tons of garbage under their noses. When that story faded under the glare of press attention, they sold the project to locals by speaking of new jobs for the village and income for the region. They promised that they had purchased the most modern waste management technology Sweden had to offer (though the Swedes themselves were somewhat surprised by this news as this was the first they had heard about any such deal).

Before the elections, Arkhangelsk Governor Igor Orlov stated firmly that there would be no dumping of “imported” garbage in the region. After his re-election election however, the regional government gave the “Shies” project priority status. The citizens demanded a referendum against importing garbage from other regions. Deputies refused to submit the referendum to a vote and deputies of the neighboring Komi region also voted “no”.

So the project has continued and the godforsaken Shies station has become a symbol of popular protest. This is not a protest driven by ecologists or politicians but by ordinary villagers. And they are angry.

The 5,000 hectare dump site under construction is officially called the «Ecotechnopark» project. Garbage from Moscow is to be packed in briquettes in Lyuberts and brought here by train and buried. 5 trainloads per day are planned and the landfill will be taking Moscow’s garbage for the next  20 years. More than 10 million tons of waste is planned for the Pomorie region.

The land around Shies is swampy and the riskiness of this not so environmentally friendly project is evident. The ground water from here feeds more than a hundred creeks that flow into the Vychegda River, a tributary of the Northern Dvina.

In December, a national «Day of Unity» protest was held in many places around the country. In January, activists established an interregional social movement known as the Vychegda Defense Committee. Their main goal is to prevent the trash from being brought into Pomerania and their main goals are to stop the construction of the landfill and to get Governor Orlov’s resignation. Vychegda  feels the government has it coming for ignoring the months-long protest. Representatives of Rospotrebnadzor, the consumer and human protection agency, Rostekhnadzor, the Federal Environmental, Technological and Nuclear Supervision Service and the prosecutor’s office had never even visited the construction site until the end of January. And sure enough, they found that the object is indeed being built without permission, approved project documentation or public hearings. After these official findings, the Urdom administration filed a lawsuit against the leader of «Technopark» LLC and Russian Railways, who has leased the land at Shies station demanding a stop to the work on the landfill. The court however rejected the claim.

On February 3, a second Day of Unity was held and meetings and pickets in support of Shies took place in 70 cities and villages around the country.  In response, anti-protest PR comes spinning generously from the pages of «loyal to the government» information resources. The line there is that the protests are being paid for by Western money and one headline read that a «Garbage Maiden» has begun in Arkhangelsk. And in a parallel move, the village deputies came up with a new legal move to pacify the situation and they offered to cheaply rent out land only one kilometer from the future landfill to anyone who wanted have a summer cottage there.  By December, more than a hundred parcels were taken, basically the whole village. The point is to occupy the land and prevent «garbage scavengers» from taking over.

But the garbage war continues. The inhabitants of Komi, the nearest settlement of the republic just 19 km from Shies, are also involved in the Urdom protests. People are organized into duty shifts, have established a communications network and are ready to mobilize at any time. Some local protesters have become rather serious partisans. «Hedgehogs», spiked metal strips have been placed under the wheels of KamAZ trucks carrying sand to the construction site, shots have been fired at gasoline tankers, power lines at the unregistered posts under construction have been cut at night and they have set fire to tractors. One night, a group of young men in masks appeared at the construction site. There was a brief standoff until help arrived from Urdom. Outnumbered, the thugs capitulated and left.

And then, there was last Friday. The convoy was trying to haul sand and fuel to the construction site near the he village of Madmas. The trailer had been installed to keep the vigil warm. After hitting the trailer, the excavator driver tried to ride through the group of protestors and was pulled from his vehicle. The activists detained the driver and held him for several hours until the police arrived.

Though protesting the project is illegal, the people assured local police that this action was designed to aid law enforcement. The law designates that heavy trucks are prohibited in the area where dump trucks move about. There is a sign stating exactly that. They also pointed out that the driver was obviously very drunk, so much so that he even fell out of the cab all by himself. Protesters claim that they have seen several more drunk drivers at the wheel of heavy trucks, so really, they were simply doing their part for the local police, who by showing up several hours later, apparently had been in no hurry to intervene in the situation.

And before the evening was over, a new command tent had been set up at Shies station, replacing the destroyed dog house. The watch continues round the clock.

On Friday night, People were willing to stand as human shields to block dump trucks on the Shies-Urdom road. And at least for the moment, they have managed to stop the construction. This time, the local residents managed to stop the trucks. The «Partisans of Pomorye» have drawn a line in the sand and have no intention of allowing Moscow’s garbage to be dumped on their land.