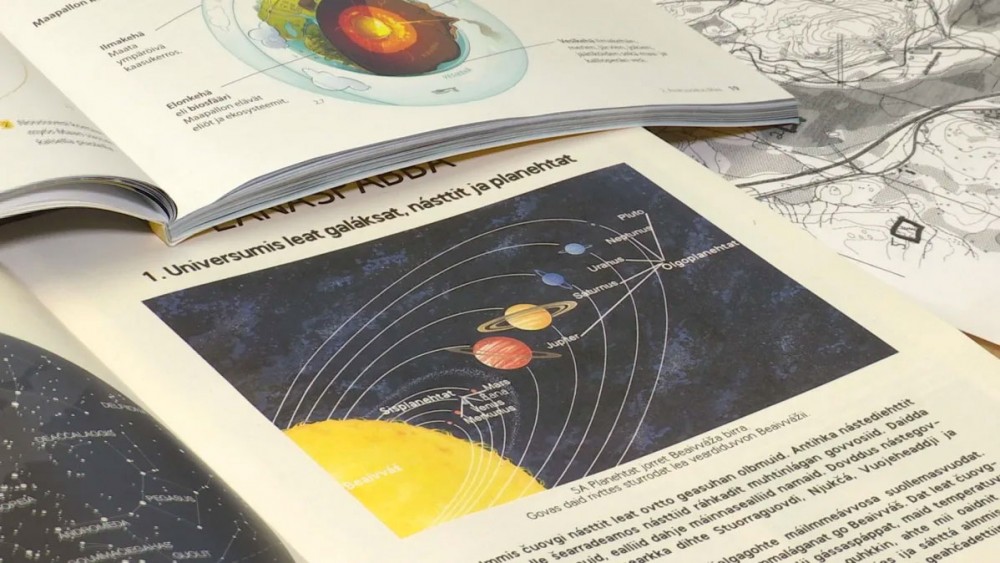 According to the Educational Office of the Sámi Parliament in Finland, the textbook situation in schools is terrible, but it is impossible to produce enough new books without more financial resources from the state of Finland.
Read in Russian | Читать по-русски
By

Salli Konttinen teaches the Sámi language and humanities and natural sciences in Sámi at Ivalo Lower Secondary School in the municipality of Inari. Textbooks written in Sámi and in Finnish pile on Konttinen’s desk. There are even handouts on the table.

Konttinen teaches Sámi, but she looks for up-to-date information and words that correspond to the new curriculum in the Finnish textbooks. It is of no use to search them in the books written in Sámi, because they are old, even as old as twenty years.

«We’ve been discussing the space in class, so we’ve also taken up the fact that Pluto is no longer considered a planet. In the Sámi textbook, it is, of course, still listed as a planet. But I’m aware of the scientific discussion on the issue that has been going on for a long time, so we dealt with that in the classroom,» Konttinen says.

Though some things may have changed after the textbook was printed, a teacher must do the best she can in her work. In addition to having lessons, Konttinen uses several hours a week for looking for teaching material.

«There’s a huge lack of textbooks and the situation is a challenge, but it’s also the spice of this work. I get to look for, reflect and ask other teachers how they have solved their problems,» Konttinen explains.

The oldest textbooks from the 1990s

The Sámi Parliament of Finland produces teaching material in North, Inari and Skolt Sámi for compulsory schooling, for upper secondary education and for vocational and adult education. For the year 2018, the Sámi Parliament received 500 000 euros from the state of Finland for work on educational material, and the allocation was enough for financing approximately 40 projects.

During the year, altogether 22 new publications were published in the Sámi language: ten in Inari Sámi, three in Skolt Sámi and nine in North Sámi. However, the schools do not get far with them, as there is a crying need for learning material in Sámi.

According to Hannu Kangasniemi, the Learning Material Secretary of the Sámi Parliament, most of the Sámi textbooks used at present are about ten years old. The oldest textbooks still used in schools can be over twenty years old.

«There’s nothing special about a textbook being ten years old in the world of Sámi-language teaching. The books used for mother-tongue instruction at present were published in the 1990s,» Kangasniemi points out.

According to Kangasniemi, teachers inquire about new textbooks, but the Educational Office can only offer them old books.

«Of course, the situation is terrible. It would be important to publish revised textbooks, but we don’t have enough money.»

«Usually, as soon as we’ve managed to modernize a series of textbooks, the curricula change again, Kangasniemi says,» annoyed.

The future of education material lies with digital publications

Thus, the Sámi Parliament has, in its spending proposal to the state of Finland for the term 2020–2023, requested that the funds for education material be raised considerably.

«We could get far with as little as 800 000 or a million euros. After all, we’re not talking about very high sums. But the decision-makers don’t seem to understand that we produce learning material in three different Sámi languages,» Kangasniemi says.

The aim is to switch the focus of the work on education material to digital material that is easier to renew and update.

«We increase the share of digital material all the time, and it is, of course, a good alternative for us, especially in terms of updating information.»

«Very soon, we’ll publish new digital material, and a while ago we decided, for example, not to publish the newest geographical learning material in the form of a textbook. Indeed, it’ll be interesting to see how schools react to this,» Learning Material Secretary Hannu Kangasniemi reflects.